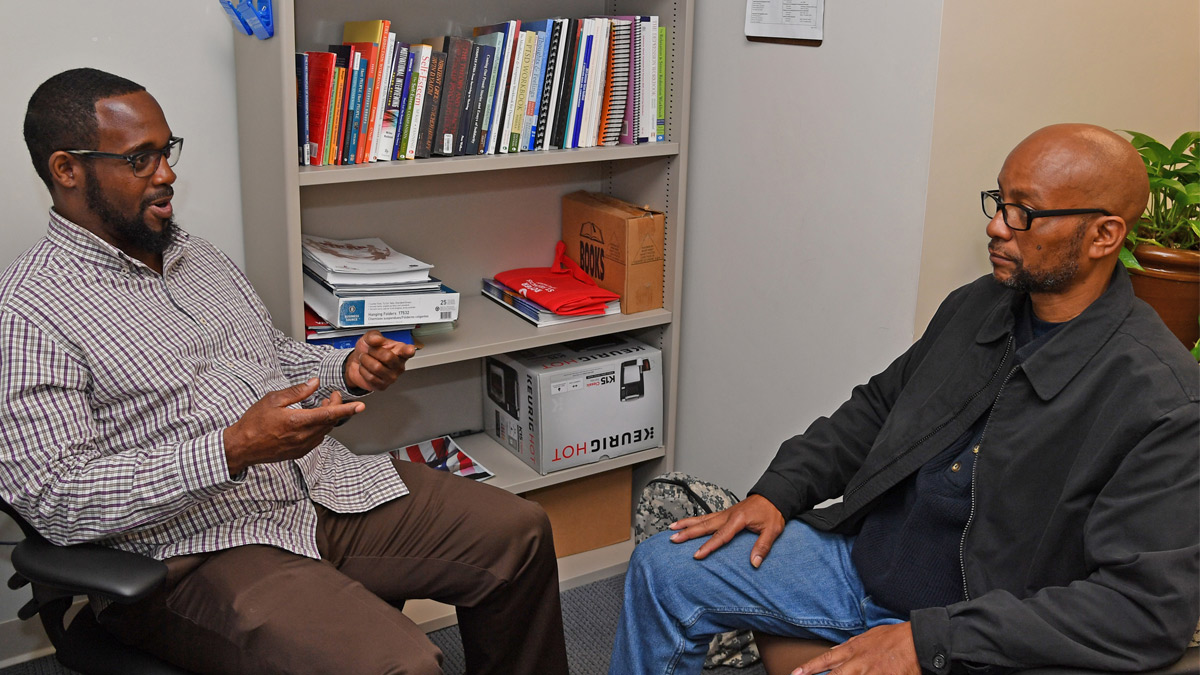 Tyrone Jarmon said that if anyone would have told him 10 years ago that he would be a peer support specialist with the Ralph H. Johnson VA Medical Center’s Substance Treatment and Recovery (STAR) Program, he would have thought they were crazy – mainly because he started his own sobriety treatment program in Asheville, North Carolina, just a decade ago.

For Jarmon, the drinking began right around the time he joined the Army in 1986.

He remained in the Army for 12 years and was stationed in several different places.

“I was gone a lot and in the field, so I saw some things that were difficult to deal with,” he explained. “Drinking helped me cope. But it was also a social lubricant. I was more social when I drank.”

When he got out of the military in 1998, he noticed that the drinking got worse.

“It caused problems in my career and with my family,” he said, adding that his “alcohol-related incident” kept him from re-enlisting.

“It was my own fault you know,” he said. “But it left a bad taste in my mouth and I got depressed, which didn’t help my drinking problem.”

Jarmon said that for a while he was successful after his stint in the military. He went back to school and worked for the U.S. Postal Service and as a technician for a couple of large companies, including Verizon, but his underlying addiction remained.

“At some point during that time, I started using cocaine,” he said. “I knew I had to deal with the issue after years of losing jobs and having family problems.”

Jarmon, who was living in North Carolina at that time, entered a mental health ward to receive treatment but found himself in a homeless shelter in Durham. He had reached rock bottom. He sought help from the Durham VA Medical Center who referred him to the Asheville VA Medical Center. It was there, in 2009, that he got the help he so badly needed.

“I had to work very hard at it, but I was determined to get better,” he said. “I went to after-care treatments and AA meetings, and I had really good people around me. I just had to change my whole environment.”

In Asheville, he participated in their compensated work therapy program for a year and lived in housing that the Asheville VA Medical Center provided for two years. He then went on to work in housekeeping and became a telehealth technician for two years.

He moved to the Charleston area and got a job with the Ralph H. Johnson VA Medical Center in 2013 because “someone told me that I would be perfect for the job as a peer support specialist. I applied and the rest is history.”

He was certified as a peer support specialist through the University of North Carolina’s School of Behavioral Health. He also attends annual peer support training classes through the VA in order to keep his certification. He mainly works with veterans on their own sobriety, helping them with coping skills, goal planning and to proceed with steps in the right direction.

“Substances are used to mask the real issues,” Jarmon said. “It could be PTSD, anxiety, depression or family problems, but it’s not about substances. It’s the underlying issues we have to get to the root of.”

He said that addiction has no face, meaning there is no “type” of person.

“It could be a very successful person that just can’t handle the pressure,” he said. “There really is no face.”

Jarmon said that peer support is just one piece of the puzzle in the VA’s STAR program. They offer addiction-trained psychiatrists, psychologists and social workers as well. But peer support is a very important aspect of the program because it gives veterans a chance to meet someone who can relate to them.

“When they see me, they think, ‘so this is what it looks like when you put in the hard work,’” Jarmon explained. “They see what I have been through and how I got here, and they see that it is possible for them, too.”

Jarmon is passionate about getting veterans reconnected with who they once were.

“We don’t see who they were before the addiction, before they took the wrong path,” he said. “We just see the aftermath, but the STAR program is dedicated to getting them back to living their life outside of drugs and alcohol.”

And for Jarmon, he said being a peer support specialist helps him just as much as it helps his clients.

“I still need help,” he admitted. “It keeps this all fresh in my mind. I really take to heart that the best way to learn is to teach.”

“There are so many wonderful resources here,” he concluded. “They really should take advantage of it.”

Jarmon gives credit to his supervisor, Dr. Kathryn Bottonari, and all his colleagues with the STAR program for helping him grow and allowing him to branch out and try new things.

“They have been a huge asset to my overall success as a peer support specialist,” he said.