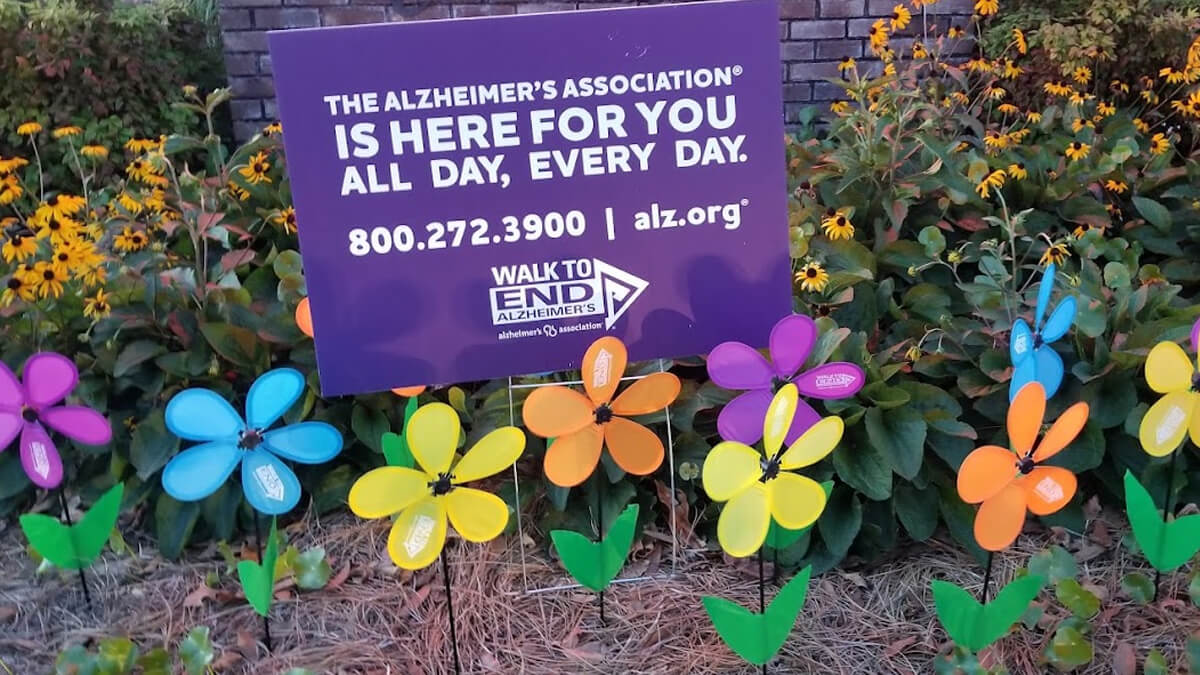 The Alzheimer’s Association is committed to ending Alzheimer’s disease and all other dementia by leading in global research, promoting risk reduction and early detection and advancing quality care and support. Alzheimer’s, which affects memory, thinking and behavior, attacks almost 100,000 South Carolinians over the age of 65 – a number that is expected to rise by more than 26% by 2025. Worldwide, 50 million people are living with Alzheimer’s and other dementias. Researchers estimate that the number of people with dementia globally will triple to more than 152 million by 2050.

As the world’s largest nonprofit funder of Alzheimer’s re search, The Alzheimer’s Association works tirelessly in the effort to find a cure. Its Walk to End Alzheimer’s, held annually in more than 600 communities worldwide, has become an integral part of the fight against this devastating disease and the Association’s fundraising efforts.

The Walk has taken place in Charleston since the mid-1990s and has become a beloved community event that brings together those living with Alzheimer’s, their caregivers and their family and friends. Because of the COVID-19 pandemic, the Walk was a virtual event in 2020, but the festivities were back in full swing in 2021, with safety precautions including social distancing, a staggered starting line and pandemic-specific requirements for vendors.

On Oct. 16, the Walk to End Alzheimer’s, sponsored by South Carolina Federal Credit Union and other contributors, brought together individual participants as well as social and corporate teams at Riverfront Park for what Walk Manager Meryl McCants called “the largest Alzheimer’s support group of the year.” McCants explained that Alzheimer’s can be profoundly isolating to patients and their caregivers alike, which is why she believes the Walk is such an important event.

The festivities kicked off with a ceremony in which all participants were welcomed, stories were shared and the tradition of the flowers was explained. Each walk participant received a flower in a color that represented the way in which their life has been impacted by Alzheimer’s and other dementia. The flowers serve as a link to the devastating commonalities among those living with and affected by the disease.

Aimed at bringing awareness while raising funds for research and creating a community of support, the Walk to End Alzheimer’s offers participants the option to join the local walk or “walk where you are” using a smartphone app. The application tracks steps and has an augmented reality flower garden where users can hold up their phone, choose a flower and plant their virtual bloom in honor of loved ones who have been affected.

Bringing families together in nature and surrounded by Charleston’s beauty, the two-mile Walk was open to participants of all ages. A family-friendly event, those in wheelchairs, children in strollers and friendly dogs on leashes were welcome. At the conclusion of the event, participants were asked to take their flower with them as a memento of the event or to plant the flower in a designated area of Riverfront Park to create a field of flowers and garden of support and camaraderie.

Laura Rayl, a 12-year participant of Charleston’s Walk to End Alzheimer’s, loves to see all the flowers planted in the large open field.

“It is such a beautiful sight and a wonderful photo opportunity. The wall of memories is also great as we can all make a note as to why we walk, and we can read others’ reasons why,” said Rayl.

Early symptoms of Alzheimer’s include slowed thinking and occasional problems remembering. Symptoms usually progress to serious memory loss, confusion and other major changes in the way the brain functions. Because people with memory loss and other possible signs of Alzheimer’s have a hard time recognizing dementia-like symptoms, loved ones often become an integral part of recognizing the disease, pro viding daily caregiving and participating in decision making.

Whether the patient is present, honored or memorialized by those they left behind, the Walk to End Alzheimer’s brings those touched by the disease together for healing and fellowship, something that participants look forward to year after year.

The Alzheimer’s Association helps those facing dementia of any kind through free services, including community education programs, caregiver support groups, early stage dementia programs and a 24/7 helpline at 800-272-3900. To learn more, visit www.alz.org/sc.