There’s a special place where children with special needs can dream their dreams, face the world with confidence and experience the exhilaration of being young, optimistic and hopeful. At Camp Rise Above, kids can be kids, regardless of the challenges they face or the hurdles that have been forced to navigate. 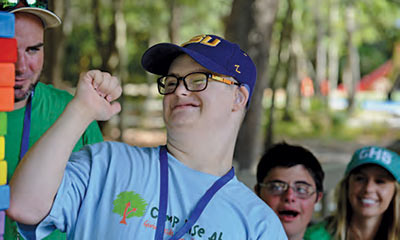 “You only get one childhood,” said Erin Ulmer, Camp Rise Above executive director since 2014 and one of only two paid employees in an organization whose engine is fueled by the energy of volunteers.

Camp Rise Above, which was founded in 2008 and obtained its nonprofit status two years later, serves children ages 6 through 18 who have a variety of medical issues such as heart disease, kidney disease, autism, asthma, sickle cell anemia, Tourette’s syndrome, epilepsy, traumatic brain injury, craniofacial differences, Down syndrome, cerebral palsy, cystic fibrosis and brain tumors. Some campers are siblings of children with brain tumors, while others are transplant patients and children whose parents have been diagnosed with cancer. 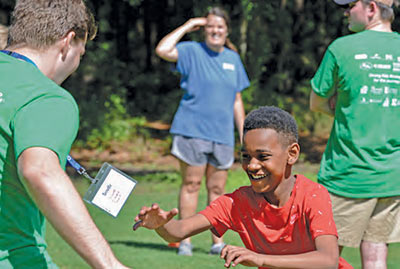 Ulmer explained that the age limits are not set in stone, especially in view of the fact that most of the organization’s in-person activities were canceled in 2020 because of the COVID-19 pandemic.

At this point, Camp Rise Above is more of an idea than a place. The organization has a small office on James Island, but its summer day camps and family fun days are held for the most part at James Island County Park. Its CRA @ The Hospital program is hosted by medical facilities across South Carolina, giving kids a break from the routine of receiving treatment for serious medical issues.

That will change someday, according to Ulmer, but she pointed out that the price tag for a permanent home that would provide for the needs of all Camp Rise Above’s kids – including fully accessible cabins, a recreation building, a climbing wall, a ropes course and a state-of-the-art medical facility – could be in the range of $19 million to $24 million.

“Ideally, the land would be gifted to us,” she said. “We try to tell as many people as possible about our mission. You never know when someone might have some land that would be a good fit for us. Our goal is to find a space within a 45-minute drive of the MUSC Shawn Jenkins Children’s Hospital. We don’t want a space where our kids are half the population, and the other half is able-bodied kids. We want a space built for children with special needs.”

Camp Rise Above’s permanent home might be similar to Camp Cole. The Columbia-area facility will host the organization’s first-ever overnight camp this summer, back-to-back week-long sessions for 90 to 95 kids each. Another 80 youngsters will be able to attend two-day sessions at James Island County Park.

“Camp Cole is a wonderful facility and a perfect fit for us. They just needed people to bring kids in. It’s a great partnership,” Ulmer said.

She pointed out that monetary donations are important, both to maintain the day-to-day operations of Camp Rise Above and eventually to establish a permanent home for the organization, but added that volunteers also are a vital part of the camp’s success. She said around 120 to 140 people donate their time and talent each year, some of them students at The Citadel, the College of Charleston and Clemson and others members of the community who simply want to support a good cause.

“What we need most of are counselors,” Ulmer said, noting that each of them is responsible for one or possibly two campers. “It’s especially hard to find male volunteers, but it’s amazing to watch these young boys look up to their counselors.”

In the end, Camp Rise Above is all about making kids feel like kid

To learn more about Camp Rise Above, visit campriseabove.org.