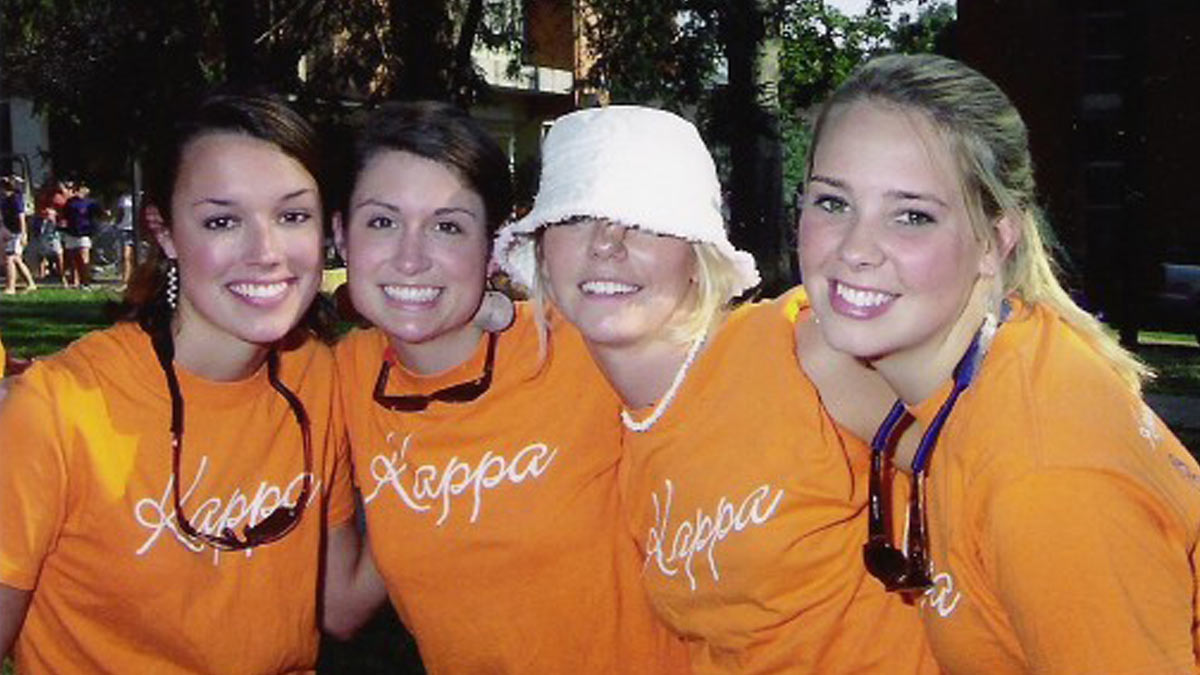 The diagnosis came fast. So did the surgery and the reconstruction. Larsyn Runion Cross’ melanoma treatment was a long time coming though, and it scarred her – physically and emotionally – for the rest of her life.“I got the diagnosis on a Friday night, and, a week later, I was in my consultation,” remembered Larsyn, who was 20 years old and looking forward to her junior year and rejoining her sorority at Clemson after another summer of surfing, swimming and the beach.

“Melanoma spreads, so they wanted to get it out as soon as possible,” she said. “My dermatologist told me that because of where it was, on my nose, it could go up my sinus cavity, which goes straight to the brain. His guess was that it could’ve been in my brain within the year.”

Cross, a summertime lifeguard and lover of watersports, lived for the sun.

“My skin was so dark and my hair was so white,” the petite blonde recalled.

“The incidence of people under 30 developing melanoma is increasing faster than any other demographic group, soaring by 50 percent in women since 1980,” said Dr. Coakley. “The fact is that while a person of any race can get melanoma – Bob Marley died of it – it is much more common in white people who live in sunny places and are outside frequently. Charleston fits that description.”

The pimple on Cross’s nose was not new. For many summers, it’d been turning bright red and sometimes bleeding in the sun. Cross went to her father, a pharmacist, with all her health questions, and the two repeatedly discussed what they thought was a pesky pimple without drastic alarm.

“The most important thing is the ‘ugly duckling sign.’ Our bodies make many different moles, skin tags and acne bumps, but I care about the one that doesn’t look like the others,” said Dr. Coakley. “Having a pimple that lasts years is a huge red flag.”

“It was the summer of 2005, and we had just gotten home from a family vacation in Garden City,” said Cross, who remembered the moment of realization vividly.

“I was sitting on the couch reading an issue of Self magazine, flipping through the pages, and there was an article titled ‘My Pimple was Skin Cancer.’”

From that moment to having a quarter-sized piece of her nose removed was a blur.

“By the time I finished reading, I was hyperventilating and hysterical,” said Cross, who could barely speak but showed the article to her dad. “He immediately got on the phone with his friend who’s a dermatologist. They got me in within the week for the biopsy. Ten days later, I got the call that it was stage one melanoma, and I needed to be in surgery the next week.”

That was 13 years ago, but Cross, who’s since gotten married, moved to Denver and started her own personal training business, tears up when she remembers both the support and stares she got when she returned to school.

Doctors removed nearly an inch-round section of Cross’s nose until the cancer was gone. Four days after a reconstructive surgery that took a flap of tissue from her head to close the hole in her nose, Cross went back to school.

“I went back on a Monday, and I gave my first speech in speech class that day,” said Cross. “My speech was about sun protection.”

Cross said the biggest change in her life isn’t sunscreen, being stared at or even the fact that her nose sometimes grows hair since the skin was grafted from her hairline. The biggest change is her dedication to preventive health.

“I know I could’ve prevented this for myself,” she said. “The experience jump-started my healthy lifestyle. Before that I was eating McDonald’s cheeseburgers and a bag of Swedish Fish and calling it a day.”

Now, Cross is both a wellness professional and an advocate for educating youth on sun exposure. Working with Belmond Charleston Place, she’s collaborating on the I Will Reflect Campaign to install sunscreen dispensers around the peninsula, at Joe Riley Stadium, in schools and at local beaches.

“Charleston gets 290 days of sunshine a year, and skin cancer in young people everywhere is on the rise,” said Belmond’s Annette Sandford-Lopez of the $70,000 program set to launch this year. “Every time doctors go in and out of a room at MUSC, they use a dispenser to sanitize their hands. We thought, ‘that’s a perfect idea for a sunscreen dispenser.’”

“There have been recent breakthroughs in artificial intelligence for melanoma detection, and, in the future, I’ll have AI scanners to diagnosis melanoma at the earliest stages,” said Dr. Coakley.

“Initially, the doctors told me that I was going to have to give up everything I love – being outside, skiing, all my things,” Cross said.

But it is not a sunless life for Cross. She admitted that there are days when she’s caught off guard, without extra sunscreen, but, “I now choose to be as protected as I can. I am not perfect at it, but this is my life,” said Cross.

“There’s no history of melanoma in my family. The doctors 100 percent attribute this to being out in the sun and not protecting my skin,” she concluded.

Join the movement and donate at www.Iwillreflect.org.