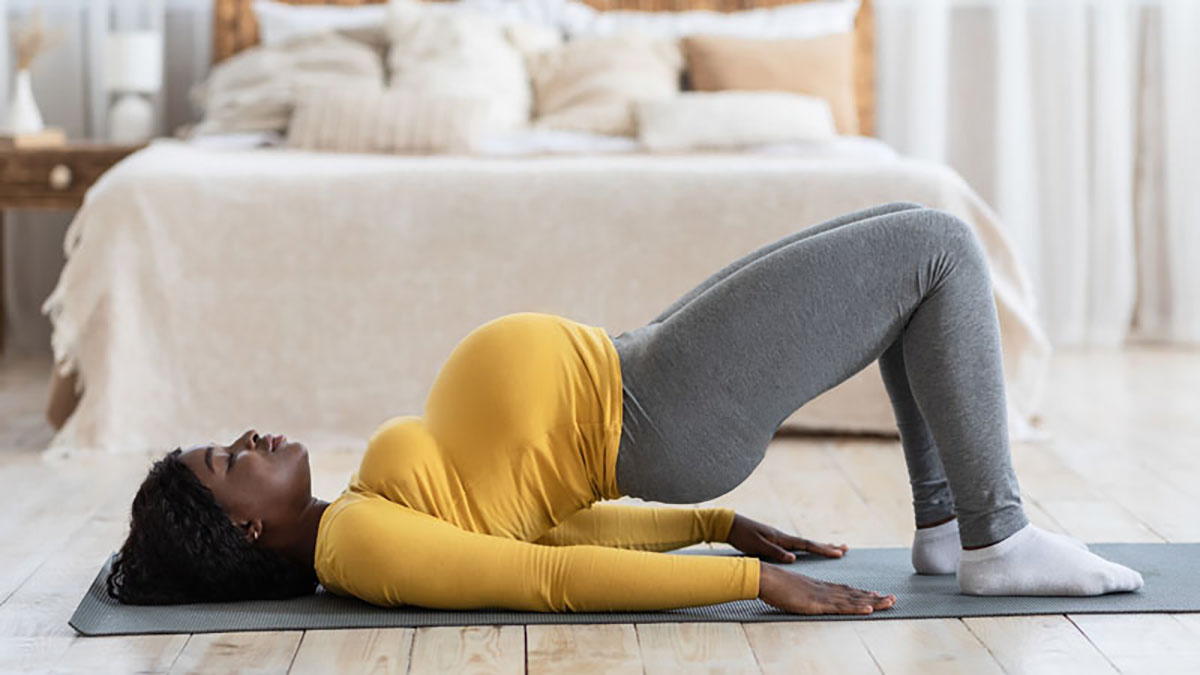 There was a time when pregnant women were discouraged from exercise as gentle as taking a walk because gravity might pull the baby out prematurely. Modern science has debunked those myths, and today’s women are encouraged to maintain active lifestyles right up until the baby arrives. Careful exercising can strengthen muscles, better preparing the mother for a healthy delivery.

According to Caitlin Guevara, co-owner of Fit4Mom in Charleston, “Three great components of any prenatal fitness program are cardio, strength and core work. Cardiovascular exercise is particularly important during pregnancy to help the mom-to-be to regulate her heart rate, which increases during pregnancy, to manage the higher volume of blood delivering oxygen and nutrients to the baby.”

Here Are A Few Recommended Exercises

Directions: From standing, bend your knees and sink the hips down and back as you would to sit down in a chair. Forcefully straighten the legs and hips, pushing off the balls of your feet to either a jump or a heel raise. Repeat for 90 seconds, and then move on immediately.

As a pregnant mom herself, in 2017, Guevara found her community at Fit4Mom: “They got me through the newborn days, and they have carried me onward. My passion is to help other women find their own strength in motherhood at any prenatal or postpartum stage.”

GUEVARA RECOMMENDS THE UPRIGHT ROW AS A STRENGTH-BUILDING EXERCISE

Directions: Use a resistance band or dumbbells. Start with arms extended straight, bend and raise the elbow up to just below shoulder height. Exercise 90 seconds and then move on immediately.

Dr. Megan Rome, PT, DPT, CLT, of Rome Physical Therapy in Summerville, is a pelvic floor and obstetrics physical therapist. After studying and practicing in Florida for many years, she returned to open her own clinic in the Lowcountry. Dr. Rome agrees that there are few reasons to avoid exercising while pregnant.

“If you are not experiencing any medical complications but are experiencing aches and pains, urinary issues or vaginal pressure, I would recommend seeing a pelvic floor physiotherapist so that you can return to exercising quickly and to prevent anything from getting worse,” she said.

Directions for bridge: Lift the pelvic floor, engage your lower core, press knees out slightly with your heels firmly into the ground. Lift your hips slowly off the floor and slowly lower.

Directions for core holds: On your hands and knees, lift your pelvic floor and pull in your low core as if you are gently hugging your baby with your belly. Hold for 30 seconds.

Both Dr. Rome and Guevara agree that your pre-pregnancy level of physical fitness is a determinant in choosing the types of exercises to practice during pregnancy. It is important to exercise in a range that is familiar to your body and with the approval of your doctor. The benefits of being as physically fit as possible before, during and after the birth of your child are numerous and well worth your best effort.