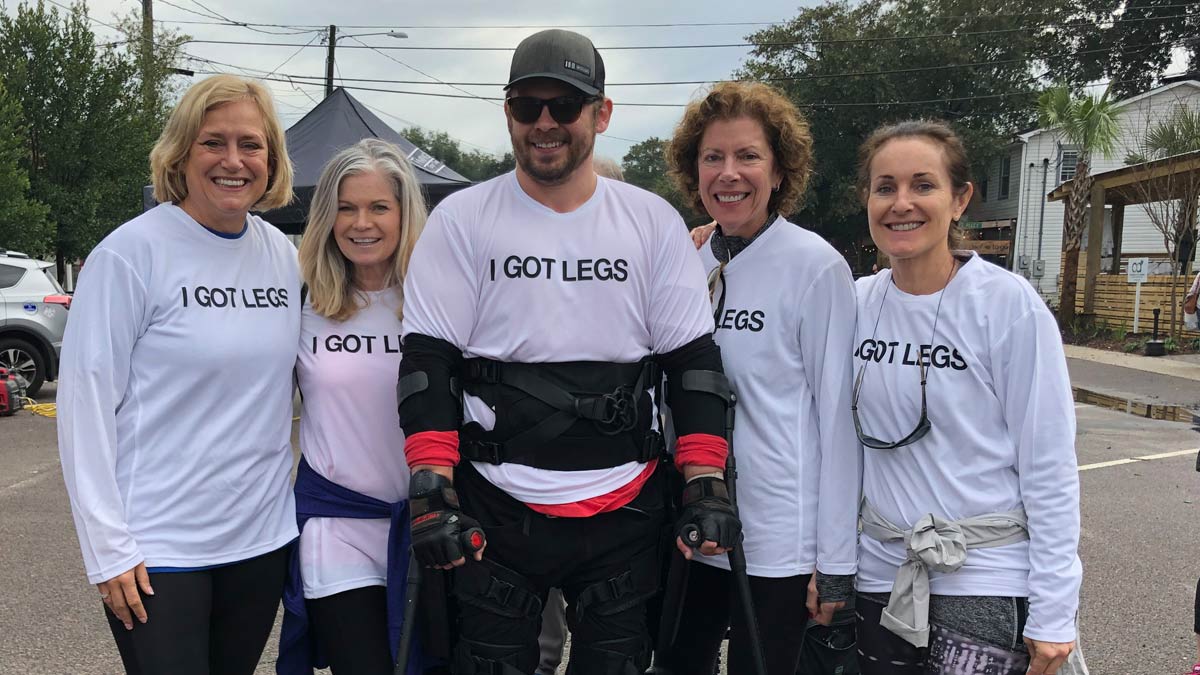 “That which does not kill us makes us stronger.” – Friedrich Nietzsche

That philosophical quote can be summed up through the story of one individual. His name is Adam Gorlitsky, and, boy, does he have a tale of tragedy and triumph to tell. The Charleston native never let adversity deter his motivation to succeed, which was first put to the ultimate test more than a decade ago.

On Dec. 30, 2005, Gorlitsky fell asleep at the wheel and was involved in a catastrophic car accident. Awakening from a coma, he heard the devastating news: “Adam, I regretfully have to tell you that you have a spinal injury at the T9 vertebra. Unfortunately, you’ll be paralyzed from the waist down for the rest of your life.”

After swallowing a gut-wrenching statement such as that, one can only imagine what’s going through a person’s mind.

Instead of giving up, Gorlitsky decided to make a difference. Over the past 10 years, he has been using advanced medical technology that is literally allowing him to stand and walk upright, a sophisticated exoskeleton suite dubbed The Betty Carlton – Betty after Gorlitsky’s late grandmother and Carlton after Carlton Banks from the TV sitcom “The Fresh Prince of Bel Air.” The Betty Carlton allows him to be mobile and carry on like anybody who has complete use of their lower extremities.

What is an exoskeleton suite? By definition, it is a wearable mobile machine that’s powered by a system of electric motors, levers, hydraulics or a combination of technologies that allow for limb movement with increased strength and endurance.

Gorlitsky is presently defying the odds that happenstance heaped upon him. He has walked in more than 45 road races using the exoskeleton throughout the country and beyond.

“My first race that I did with the exoskeleton was the 2016 Cooper River Bridge Run. It took me almost seven hours and exactly 17,932 total steps. Over the years, we have witnessed great feats in the Paralympics in a vast variety of events, especially wheelchair marathons that capture the heart and soul of us all,” he said.

When I asked Gorlitsky why he chose the exoskeleton over the wheelchair, his answer was quite simple: “Look, I’m paralyzed for life. However, with some assistance, I’m walking, and I wanted to show the world that you can’t count us out just because of our legs.”

This mission led Gorlitsky to start www.igotlegs.org. The organization’s mission, according to its website, is: “We create opportunities to transform lives for people with physical challenges.”

Gorlitsky is attempting to complete a huge mission. He is planning on earning a spot in “The Guinness World Records,” right here in ChuckTown. The Charleston Marathon is scheduled for Jan. 11, 2020. Gorlitsky is planning to start his race two days prior, on Jan. 9, hopefully breaking the record of 36 hours and 46 minutes for completing a marathon in a robotic walking device.

If that is not enough, Gorlitsky, he’d like to do a victory lap at an upcoming event. Gorlitsky will be attending the 2020 Charleston Health & Wellness Expo, which will be held Jan. 31 at the Omar Shrine Temple in Mount Pleasant.

Gorlitsky lives by a quote from Charles Darwin: “It is not the strongest of the species that survives, nor the most intelligent. It is the one that is most adaptable to change.”