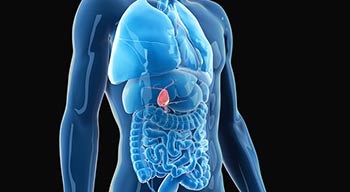 Gallstones are collections of cholesterol, bile pigment or a combination of the two, which can form in the gallbladder or within the bile ducts of the liver. In the United States, the most common type of gallstones is made of cholesterol. Cholesterol stones form due to an imbalance in the production of cholesterol or the secretion of bile. Pigmented stones are primarily composed of bilirubin, which is a chemical produced as a result of the normal breakdown of red blood cells. Bilirubin gallstones are more common in Asia and Africa but are seen in diseases that damage red blood cells such a sickle cell anemia.

How Do Gallstones Cause Problems?

If gallstones form in the biliary system they can cause blockage of the bile ducts, which normally drain bile from the gallbladder and liver. Occasionally the gallstones can also block the flow of digestive enzymes from the pancreas since both the bile ducts and pancreas ducts drain through the same small opening (called the Ampulla of Vater) which is held tight by a small circular muscle (called the Sphincter of Oddi). [See diagram below]. This results in inflammation of the pancreas. This is known as gallstone pancreatitis. Blockage of the bile ducts may cause symptoms such as abdominal pain, nausea and vomiting. If the bile duct remains blocked bile is unable to drain properly, jaundice (yellow discoloration of the eyes and skin) can develop and an infection known as cholangitis may also develop.

Who Is at Risk for Gallstones?

Female gender, older age, obesity, high cholesterol levels, treatment with estrogen containing medications, rapid weight loss, diabetes and pregnancy are all risk factors for developing cholesterol gallstones. Disorders that lead to the destruction of red blood cells such as sickle cell anemia are associated with the development of pigmented or bilirubin stones. The occurrence of gallstones varies widely among different ethnic groups. For example, Pima Indians and Hispanics have high occurrence rates of developing gallstones compared to Asians, who overall, have a very low rate.

What Are the Symptoms of Gallstones?

Gallstones that are not causing symptoms generally do not cause problems and do not require further evaluation. Many times gallstones are found by chance on an abdominal x-ray or ultrasound done for other reasons. Unless symptoms of pain, nausea, vomiting or fever are present, no additional testing or intervention may be needed. Symptoms arise when a gallstone blocks the flow of bile out of the gallbladder or through the bile ducts. A gallstone in the common bile duct is called choledocholithiasis and may cause intermittent or constant discomfort. The pain of choledocholithiasis is usually localized in the upper abdomen, and can radiate (be felt in another location) in the right shoulder, may last many minutes to hours, and be associated with sweating, nausea, vomiting, and. Gallstone attacks can produce chest pain that may feel like a heart attack. If a pain is new and different than other pains the symptoms should be discussed with a physician.

An inflamed gallbladder (cholecystitis), infected material trapped within the common bile duct (cholangitis), or a stone blocking outflow of pancreatic juice (gallstone pancreatitis) can result in fever, chills, severe abdominal pain or jaundice. Individuals with these complaints should have an urgent evaluation by a physician.

How Are Gallstones Diagnosed?

The diagnosis of gallstones is suspected when symptoms of right upper quadrant abdominal pain, nausea or vomiting occur. The location, duration and “character” (stabbing, gnawing, cramping) of the pain help to determine the likelihood of gallstone disease. Abdominal tenderness and abnormally high liver function blood tests may be present. An abdominal ultrasound examination is a quick, sensitive, and relatively inexpensive method of detecting gallstones in the gallbladder or common bile duct. This is the test most often used.

What is Gallstone Pancreatitis?

Gallstone pancreatitis is inflammation of the pancreas that results from blockage of the pancreas duct by a gallstone. This occurs at the level of the sphincter of Oddi, a round muscle located at the opening of the bile duct into the small intestine. If a stone from the gallbladder should travel down the common bile duct and get stuck at the sphincter, it blocks outflow of all material from the liver and pancreas. This results in inflammation of the pancreas that can be quite severe. Gallstone pancreatitis can be a life-threatening disease and evaluation by a physician urgently is needed if someone with gallstones suddenly develops severe abdominal pain.

Who Gets Gallstone Pancreatitis?

What Are the Symptoms of Gallstone Pancreatitis?

Symptoms may be similar to those discussed above in Gallstones and Gallstone Disease. Additionally, the pain may be felt in the left upper abdomen or in the back. It is usually sudden in onset, quite severe, frequently sharp or squeezing in character, and often associated with nausea and vomiting.

How Is Gallstone Pancreatitis Diagnosed?

What is Sphincter of Oddi Dysfunction (SOD)

Biliary dyskinesia may develop after the gallbladder has been removed, hence the name post-cholecystectomy syndrome.

What Are the Symptoms of SOD?

Symptoms may be similar to those for which the gallbladder was initially removed and include abdominal pain, nausea and vomiting. The symptoms may be episodic. They may wax and wane. Subjects may experience weight loss due to poor appetite. Fever, chills and diarrhea are not characteristic of this disease. If symptoms are severe and do not respond to conservative treatment, further investigation may be warranted.

What Establishes a Diagnosis of SOD?

It is important to verify that other, more serious conditions are not being missed prior to embarking on a diagnosis of sphincter of Oddi dysfunction. Therefore, it would be important to verify that the patient does not have stones within the bile ducts, cancer of the pancreas or bile ducts, peptic ulcer disease or heart disease (poor blood flow to the heart, called “ischemia” or “angina” may mimic these symptoms).

The diagnosis of sphincter of Oddi dysfunction can be evaluated and confirmed using a special endoscope that allows the placement of a catheter into the bile and pancreatic ducts. Injection of contrast through the catheter coupled with the use of X-rays can give the physician pictures of the bile and pancreatic ducts. The procedure, that requires a special scope is known as an endoscopic retrograde cholangiopancreatography (ERCP). This procedure can help determine the presence of gallstones in the gall bladder or bile duct. In the case of bile duct stones, special instruments and procedures (sphincterotomy with stone extraction) (see figure 2, above) can be used at the time of ERCP to remove the vast majority of them. Measurements of the contracting force of the sphincter of Oddi muscle can be made using a special plastic tube inserted into the bile duct or pancreas duct at the level of the sphincter of Oddi muscle. This is called “sphincter of Oddi manometry” and is used to determine if the muscle is “dyskinetic” or contracts abnormally. If it does, a diagnosis of biliary dyskinesia is confirmed.