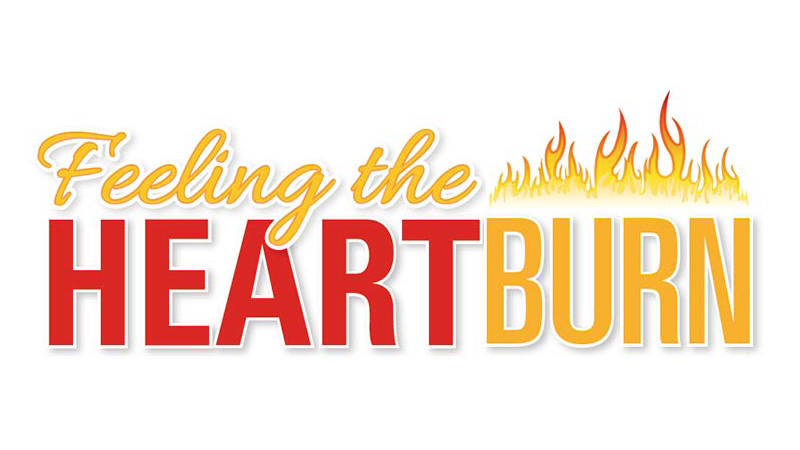 GERD AFFECTS 10 TO 20 PERCENT OF THE POPULATION

If the frequency of television commercials is any indication of how many people are concerned about any given health issue, it’s pretty clear that a lot of folks are worried about heartburn.

And with good reason. It’s the rare individual who hasn’t experienced that unpleasant fiery sensation in the chest after such triggers as Szechuan cuisine; a few happy hour cocktails; some marinara sauce; or chocolate, coffee or caffeine in other forms; including some soft drinks and all energy drinks.

Heartburn in itself is generally nothing to worry about, and gastroenterologists regularly suggest antacids such as overthe- counter drugs Zantac and Prilosec. If these work, there’s probably little to worry about.

However, if heartburn symptoms persist for two weeks or more, it’s time to consult the family doctor, or, better yet, a gastroenterologist. That’s because heartburn is one of the principal symptoms of a more serious condition, GERD – gastroesophageal reflux disease – that throughout the Western world affects between 10 and 20 percent of the population.

Of course, heartburn alone is not the only indicator of GERD. Other symptoms can include an acid taste in the mouth, painful swallowing, regurgitation and chest pain. 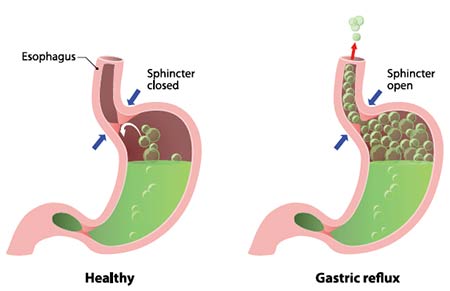 The simplest explanation for GERD is the backup of stomach acid into the esophagus caused by the opening of the lower esophageal sphincter. As Dr. Koro explained, “We have a sphincter muscle which keeps the food pipe closed so that we don’t have heartburn. That sphincter has a short time open during which it lets the saliva enter the stomach. If the sphincter relaxes more times than is needed, the digestive acid comes back up instead of remaining in the stomach.”

The good news about GERD, according to Dr. Goodear, “It’s not going to kill you.” However, GERD can cause ulcers in the esophagus or a narrowing of the esophagus caused by inflammation, called a stricture, and, most concerning, Barrett’s esophagus, a precancerous condition that demands regular monitoring.

Also, acid reflux can cause erosion and decay of the teeth and affect the sinuses and the larynx, causing hoarseness of the voice and exercise-induced coughing.

Once GERD is suspected, especially for younger patients, Drs. Koro and Goodear agree, medication is the first treatment recommended. Typically, these medications include either what are called H2 blockers, which block the action of histamines, and proton pump inhibitors such as omeprazole, which eliminate acid secretions.

If these medications work, the patient remains on them for as long as required, sometimes for life. If they do not eliminate the problem, the next step is most often an upper endoscopy.

“With an upper endoscopy, we can actually visualize the esophagus and the stomach to look for the inflammation that lets us know the patient is suffering from GERD,” Dr. Goodear said.

Performed under anesthesia by inserting a slender tube with a fiber optic scope down the throat, endoscopy is a painless and safe procedure that usually takes only about 10 minutes. It also allows the physician to obtain biopsies and screen for infections, precancerous lesions and cancer itself.

Some causes of GERD include obesity and hiatal hernia.

“Obesity is very much related to GERD. The adipose tissue within the abdomen can cause pressure on the stomach, which forces the gastric acid back up,” said Dr. Koro.

“Also, severe constipation can cause the stool to occupy so much space in the abdominal cavity that it can cause reflux,” Dr. Koro explained.

“Hiatal hernia is a common cause of GERD, and that’s one of the things we are looking for with an upper endoscopy,” Dr. Goodear said. “Hiatal hernia affects the muscle that holds the stomach in place. When this muscle is weakened, the stomach is free to move up in the chest. This weakens the sphincter, and reflux occurs. When a hiatal hernia is small, heartburn medication that reduces the acidity of the stomach may be sufficient. But for a serious hiatal hernia, surgery is required, which is done laparoscopically and generally results in a hospital stay of five days or fewer.”

How do you avoid or cope with GERD?

Other than eliminating the foods (and beverages) that contribute to heartburn, the experts suggest:

One exception, Dr. Goodear observed, might be aloe. “Aloe is one of the naturalistic medications that have been shown to be effective for heartburn. It can help with inflammation and actually does promote some healing of the esophagus.”

On a less positive note, the doctor stated that too many people make the mistake of chewing mints in an attempt to curb their symptoms. While mints may give the mouth a refreshing taste, they actually make regurgitation worse.

Drs. Goodear and Koro agreed that once a symptom such as heartburn is detected, the wise course of action is to seek medical attention. Nothing more than some medication or modest lifestyle changes may be needed. However, if a patient’s condition requires further steps, including monitoring, the younger the patient the better. This is particularly relevant to caucasian men over the age of 50, who have a considerably higher likelihood of having Barrett’s esophagus.

But even if heartburn isn’t an issue with you, there’s no need to tune out those incessant television commercials. Just stick around a while. It’s pretty certain that if you watch long enough, an exciting medical breakthrough for whatever ails you is likely to pop up. 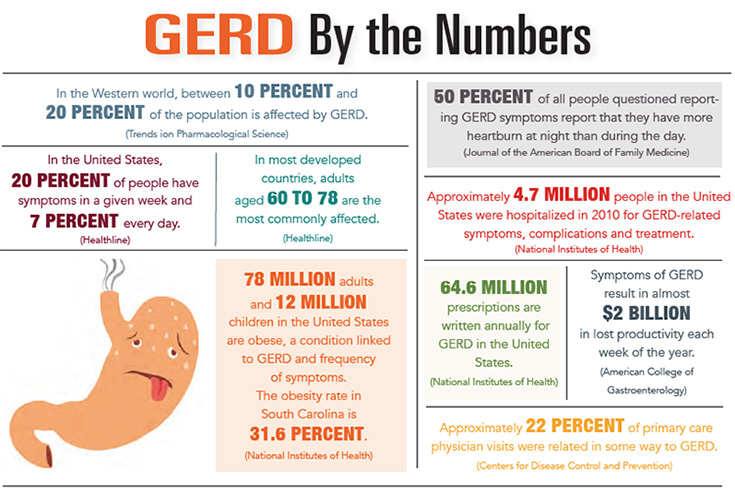