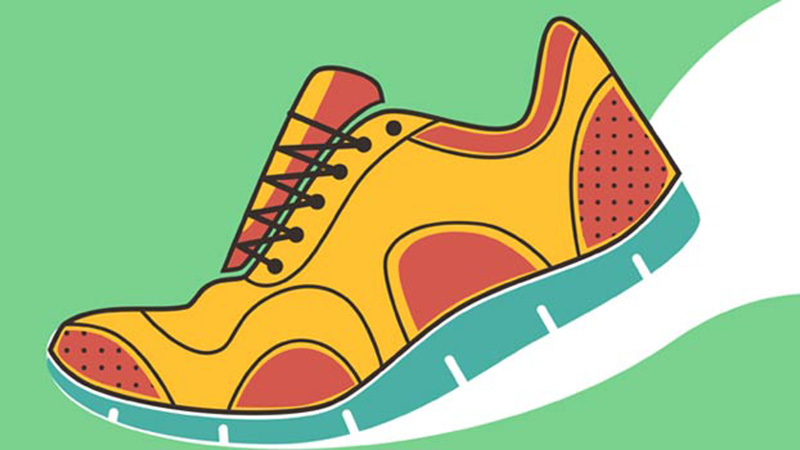 It rises high above the river and challenges locals and visitors alike. It is the annual Cooper River Bridge Run, where thousands of runners and walkers take over the Ravenel Bridge and meet the challenge. They run from Mount Pleasant to downtown Charleston and pay for the privilege in sore muscles and feet – and with their wallets.

There is an entry fee – this year it ranges from $45 to $55 – and some of that money finds its way to a variety of local charities. So not only is the run good for your health, it is beneficial to the well-being of the entire community. Entrants are encouraged to become an everyday hero and make a donation to one of 15 local charities.

For as many charities there are to donate to, there are as many ways to donate to them. This year’s event, taking place on April 1, will celebrate the race’s 40th year, and, in honor of this important milestone, the Cooper River Bridge Run started a 40 Days Raffle, where different prizes have been given away on each of the 40 days before the race. Some of the prizes were gift cards to restaurants, event tickets, gym memberships and even a car and a cruise. 100 percent of the raffle ticket proceeds go to the Cooper River Bridge Run charities. Raffle tickets sold for $20.

Mackie Moore, founder and executive director of Thrive SC, a local nonprofit benefiting victims of domestic violence, was amazed that the Cooper River Bridge Run gave each charity 1,000 raffle tickets to sell on their own. 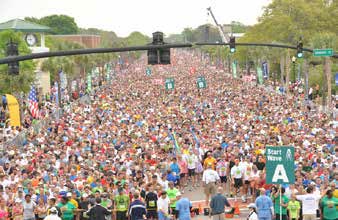 “We get 100 percent of the proceeds of the raffle tickets we sell, and that is such a wonderful opportunity for us,” she said. “The prizes speak for themselves. These are great raffle tickets with some terrific prizes.”

Other ways the Cooper River Bridge Run helps local charities is through the many events held on the days leading up to the race. For example, Pet Helpers held an adopt-a-thon at the Cooper River Bridge Run office on March 4 and bridge run registration was discounted for adopting that day. The Kid’s Run and Wonderfest will be held the day before the race on Friday, March 31, at noon at Hampton Park, and will benefit Hugs for Harper, Happy Wheels, Keys for Hope and Abbey’s Friends charities. There is a registration fee for children who want to race the toddler course or the quarter-mile or one-micle courses.

Being a Cooper River Bridge Run charity is also a great way to raise awareness. Moore said that each charity gets a job to do for the race and that Thrive SC is going to manage one of the corrals.

“We just have to make sure everyone in our corral at the starting line has the correct bib on,” she said. “We are going to be the ones wearing all purple to raise awareness for domestic violence. You can’t miss us!”

She also said that they will be able to run the bridge once their corral is off and that their registration fee was waived.

“The Cooper River Bridge Run folks have been so generous to us,” Moore said. “It is truly an honor to be a part of this.”

Participants can donate directly to a charity at registration and become an everyday hero if they would like to do more by choosing at registration to fundraise for one of the Cooper River Bridge Run’s official charities. The 15 charities to choose from include the Alzheimer’s Association; American Cancer Society; American Diabetes Association; Boeing Center for Children’s Wellness; Coastal Crisis Chaplaincy; Crohn’s and Colitis Foundation of America; I Got Legs; MUSC Center for Drug and Alcohol Programs; MUSC Children’s Hospital Fund; Pet Helpers; Ronald McDonald House Charities of Charleston; Special Olympics of South Carolina; Thrive South Carolina; Water Missions International; and Windwood Farm Home for Children. By choosing to be an everyday hero, registrants can create a fundraising page to share on their social media accounts to raise money as they train for the race.

The race also sets aside 100 bibs per charity that can be bought for $150. The money will go straight to the charity they choose and their race bib will reflect their charity of choice on race day.

And if all that wasn’t enough, the Cooper River Bridge Run went a step further this year by sponsoring the first ever Health & Wellness Expo held in January. The goal was to bring awareness to many health-related issues, such as high blood pressure, cancer, anxiety, crohn’s disease and many more. The Cooper River Bridge Run’s packet pickup expo also will have great opportunities for runners and walkers to learn about the charities involved and to gather information on nutrition, hydration and other sports-related concerns.

Deputy Chief Stan Gragg of the Mount Pleasant Police Department, who is heavily involved with the local Special Olympics chapter, said that with the help of the Cooper River Bridge Run, they are able to train and compete in 27 Olympic style sports with over 300 competitions annually in South Carolina.

“The best part is that neither the athletes nor their families have to pay for anything,” he said. “This affords members of our community chances they may not otherwise have to participate and form relationships through sports.”

The Cooper River Bridge Run does not miss an opportunity to raise money for the 15 local charities they have graciously chosen to benefit. As a nonprofit themselves, this event is definitely one that participants can trust is giving to the cause of well-deserving charities.

Moore said, “This is such a prolific race. To be one of the 15 charities chosen to benefit from the Cooper River Bridge Run is a wonderful opportunity for us. We love being acknowledged in this Charleston tradition.”

Julian Smith, the director of the Cooper River Bridge Run, said that raising money for charities goes hand-in-hand with how the race is such a big part of Charleston’s community.

“It’s important to give back,” he said. “The Charleston community really supports the Cooper River Bridge Run, and we want to show our support as well. Raising money for charity is the best part about this event.”

Whether you win or lose, the race is a win-win for everyone.

Visit www.bridgerun.com for more information and to register. 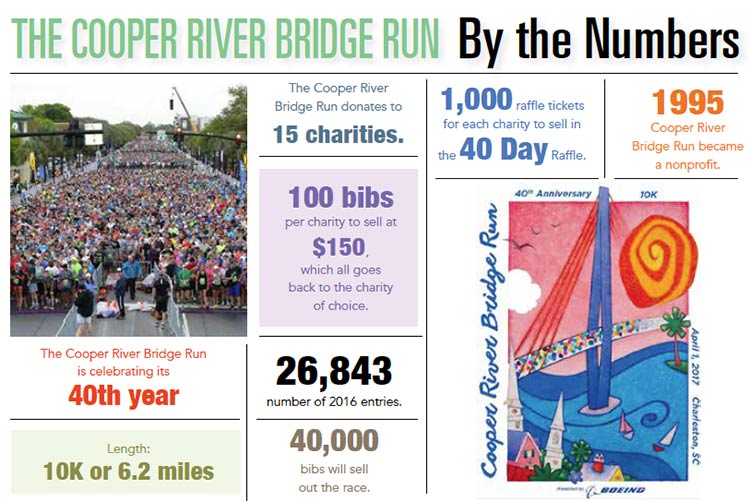