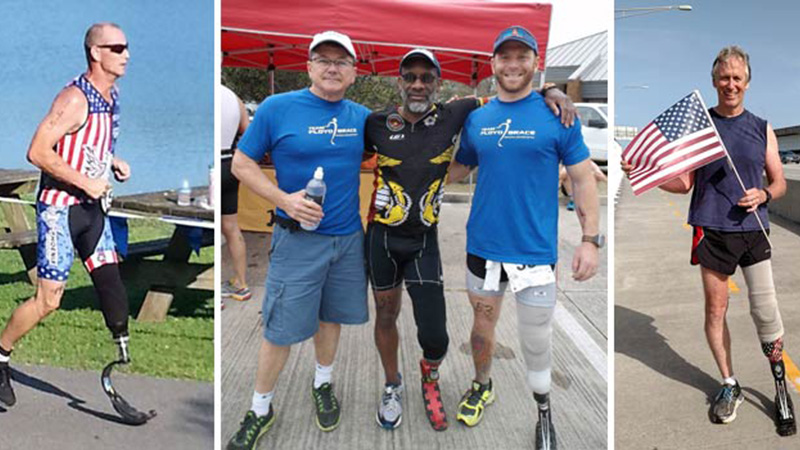 When it comes to walking and running better, just about everyone has heard of or tried orthotics. But orthotics are much more than those custom-fit shoe inserts that support the foot and help keep the spine in alignment. “Orthotics” include bracing for the feet, ankles, wrists, hips, necks and more, strengthening, straightening and restricting incorrect movement.

By contrast, “prostheses” are artificial substitutes for a missing body part specifically designed to restore function or as a cosmetic restoration – and in many cases for both. 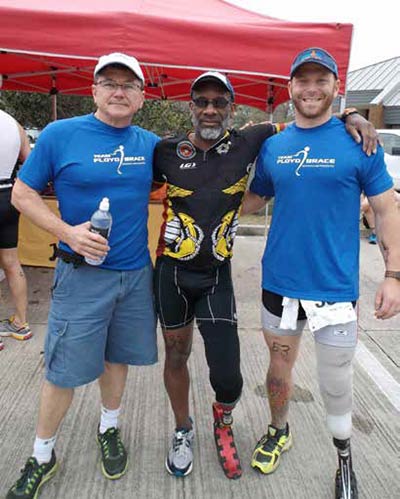 When the annual Cooper River Bridge Run kicks off this year, you can be sure that plenty of the competitors will be utilizing orthotics in their shoes. Those won’t be noticeable.

There will also be a few athletes with more obvious orthotics, such as those utilized by Marka Danielle Rogers, an incomplete quadriplegic whose lower body is supported by sturdy, custom-made, computer-controlled, bilateral-external leg braces known as Knee Ankle Foot Orthoses (KAFO for short). Last year, Rogers, a dancer from James Island, became the first athlete in her class ever to finish the Bridge Run on bilateral exoskeletal KAFO leg braces, flanked by a large, enthusiastic support group.

Surely, making it possible for a competitor who previously had hardly been able to stand unassisted to complete a 10k event is a remarkable achievement. Perhaps equally impressive, and also visible to those along the race’s route, will be those that have suffered the loss of their leg. These amputees have lost one or both legs, either above or below the knee, and have been fitted with devices that are a far cry from the tapered wooden “peg legs” sported by some of the pirates who called Charleston their home port in days of yore. 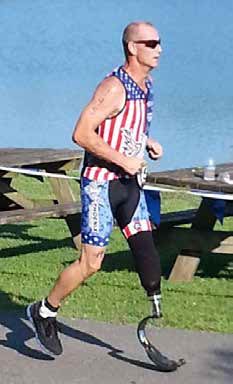 In the Lowcountry, a leading company in orthotics and prosthetics is Floyd Brace, with seven decades of experience in the field and six South Carolina offices from North Charleston to Conway. HealthLinks sat down with Floyd Brace’s Larry Wiley, certified prosthetist, co-owner and clinical director, and Ricky Miller, certified technician/prosthetic assistant.

Wiley explained that Floyd Brace was founded by Wilbur Floyd, a World War II veteran who saw too many of his injured comrades returning from combat needing braces or replacement limbs, with little help available. He saw it as his duty to help them and the Floyd Brace Company was born.

Wiley, a mechanical engineer, gained his prosthetic knowledge and skill set while stationed in the Human Systems Division at Wright-Patterson Air Force Base. Years prior he had worked in explosive ordinance, witnessing firsthand what bombs could do to the human body. Now as a prosthetist, he knows what can be done to make a wounded warrior whole.

Miller appeared to be just a friendly, knowledgeable nuts-and-bolts kind of guy until he lifted his left pant leg to reveal his own prosthetic limb. Miller was ripped from the deck of a barge and tossed 40 feet to the murky water below, his left leg destroyed, resulting in his below-knee amputation. Miller was exposed to prosthetics during his fitting and rehab, and he took his current job to utilize his prosthetic skills and firsthand knowledge to help other people.

Both Wiley and Miller are outdoorsmen and athletes and have competed in numerous mud runs, marathons, triathlons and 10ks, including the Cooper River Bridge Run, giving them valuable perspective when working with patients.

When he’s not working or running, Miller is also a skilled bow hunter and prides himself during deer season on being able to climb trees with his leg on to reach his shooting stands!

Wiley said that during his years at Floyd Brace, there have been six or seven runners with prostheses in the Cooper River Bridge Run field each year.

On the Medicare activity level scale of K0 to K4, which insurance companies honor in terms of patient reimbursement, most of these competitors would be classified as K3 or K4, meaning their mobility needs exceed that of the hypothetical average person, who might need a prosthetic leg and foot for nothing more strenuous than walking the dog or pushing a cart through the supermarket.

One of those prosthetic athletes who is an annual figure at the Bridge Run is Mount Pleasant realtor Terry Hamlin. In 1978, along with now Executive Director Julian Smith, Hamlin co-founded the race at a time when today’s soaring Arthur Ravenel Jr. Bridge was only a gleam in former Mayor Joe Riley’s eye. Some years Hamlin ran the bridge, usually finishing in the top 20 among all contenders, foreign and domestic. Other years, he would take time off to sit back and deal with administrative issues.

In the spring of 2010, Hamlin suffered a terrible accident, which left him believing that he would never walk again, much less run. After a belowthe- knee amputation, he was fitted at Floyd Brace with a standard prosthesis. Hamlin’s new leg was fine for a moderately active individual, but he yearned for a leg that would get him back into the sport he loved.

Knowing this, Wiley procured a carbon blade prosthesis for him but kept it a secret until presenting it to him just before Christmas that year. Hamlin immediately began working with his new leg and three months later was back in the race, managing to finish in the middle of the pack.

Wiley remembered, “He actually broke the first running prosthesis we gave him running down off the bridge. He’s one of only two people I’ve ever heard of that managed to break a carbon fiber leg.”

Today, Hamlin either runs the bridge in April, attends to his behind-the-scenes responsibilities and/or serves as a broadcast color analyst. He remains such an integral part of the Bridge Run that he has a special honor named for him – the Terry Hamlin Mobility Impaired Division Award.

As Hamlin himself put it, “This award isn’t for winning, and it’s not even for running especially fast. It’s for tenacity – having the will to compete despite physical challenges.”

Hamlin was quick to note that despite what some casual observers might believe, carbon fiber blades on prostheses do not offer their users an advantage over “normal” runners.

“Actually,” he added, “carbon fiber blades may even become something of a disadvantage. When you run with a prosthetic leg, you have to be careful of other people around you.”

Hamlin went on to say, “Naturally, you don’t have any feeling in that blade, so if another runner cuts in front of you and steps on it, you can go down and introduce the roadway to your face.”

Wiley pointed out that the professionals at Floyd Brace don’t simply fit patients for substitute limbs and send them on their way. Each patient receives customized follow-up and rehabilitation. Asked how long that follow-up lasts, he replied with a smile, “Forever. Until you’re dead.”

Even then, if a patient’s survivors agree, Floyd Brace will take back the prosthesis, disassemble it – they are prohibited by law from reselling a complete used leg – and use the parts to craft a new leg for a patient who does not have insurance.

“That’s the way we kind of pay it forward for some folks,” Wiley said.

Floyd Brace also works closely with the Wounded Warrior Project and the Veterans Administration and has formed its own support arm, Phoenix Athletes, the goal of which is to allow individuals to rise to new, higher levels of activity. Phoenix Athletes meet twice monthly to train together and also compete in a wide range of running and triathlon events.

Another facet of Phoenix Athletes is its Amputee Mentor Program, a support system pairing veteran prosthesis users with individuals who have recently gone through the trauma of losing a limb, to give them hope and encouragement and to show them that “they are not alone.”

“Everyone who loses a leg gets depressed at first,” Miller observed. “But most of the people we work with eventually develop a sense of humor about the situation.”

As for the Cooper River Bridge Run, Wiley believes, “For most amputees, it’s one way of staying in shape and believing that if they can do the 10K when it rolls around, they’re probably doing all right, because most people can’t even walk a 10K!”

“Believe it or not,” he added, “some people have come back to us maybe three or four years down the road after their amputation and fitting and said that they thought their life was over when they first lost their limb, but this experience just might have been the best thing that ever happened to them. For years, they carried around a bum foot and gained 50 pounds. They thought their life was over.”

Wiley said that their goal is both compassionate and selfish.

“We do our best to help every patient move up to a more active lifestyle and to achieve all the mobility they are after, which usually means an upgrade to a more complex, more functional prosthesis,” he remarked.