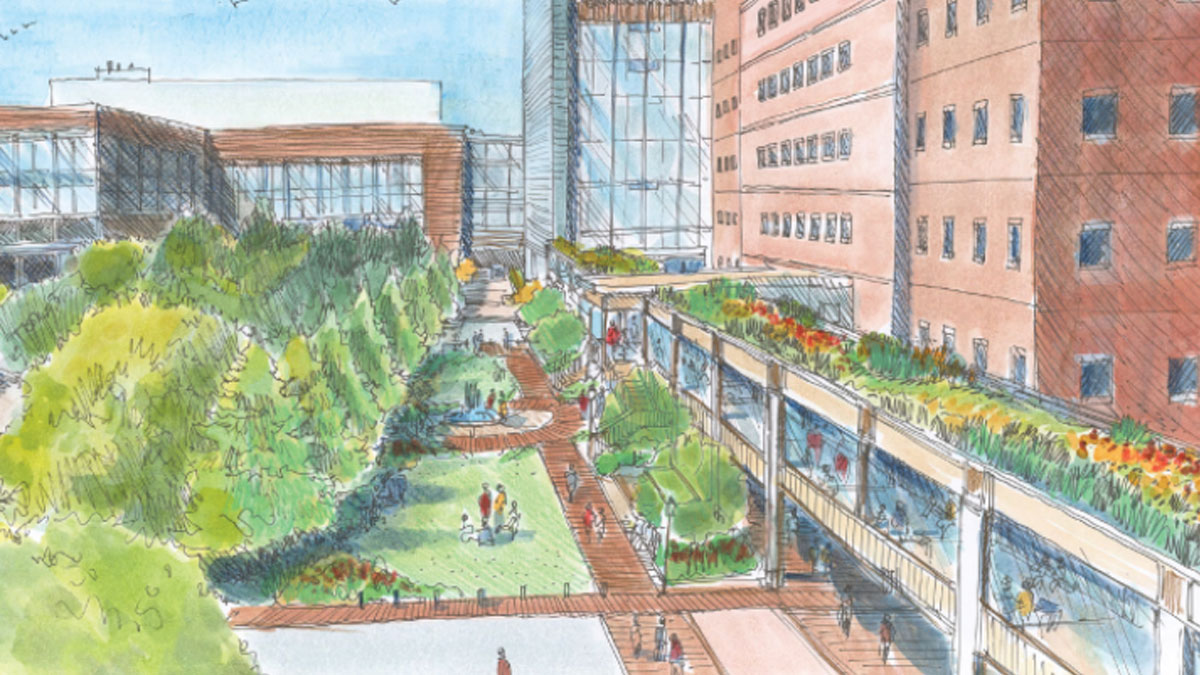 Hospitals have been around since the ancient world. The first American medical facility functioning more or less as we know them today was established in Philadelphia more than two-and-a-half centuries ago.

There is no denying that when serious injury, illness or another incapacitating ailment strikes, our hospitals are where we turn to for aid, comfort and healing.

Yet, for all their commitment to service through the therapeutic arts and sciences, hospitals and their environs have rarely been “warm and welcoming” to patients, medical professionals and the support staff. Hospitals by design are antiseptic, as they must be. But that aura has almost always extended well beyond their portals to encompass their surroundings.

In 2014, under the leadership of Medical University of South Carolina President Dr. David Cole, a team of dedicated professionals from MUSC, Roper St. Francis and the Ralph H. Johnson Veterans Administration Medical Center organized to change all that.

Their plan was to create the Charleston Medical District Greenway, an ambitious project they believed would make the area bordering and connecting the three nearby facilities not only “hospital” but “hospitable.” Their goal was offering all who come there a relaxing and welcoming outdoor area to sit, talk, relax and enjoy a much-needed break from the pressures and tensions of the often life-and-death procedures within the hospitals’ walls.

Visitors to the Medical District have already witnessed many of the fruits of those labors. Phase I of the Greenway was completed and opened in 2017.

Doughty Street, at the heart of the Medical District, was permanently closed from President Street to Ehrhardt Street – with one lane closed to Courtenay Street – and its asphalt painted green to represent the sod soon to replace it. Large cypress trees in huge planters with lights in their branches lined the streets, and green chairs and tables added to the nature motif. Those trees will ultimately be planted once the paving is removed.

To make the area even more pedestrian-friendly, crosswalks have been more boldly marked and “calming” traffic signals have been installed at Courtenay Street to allow walkers more time to cross in any direction.

Phase II of the project is well underway, with completion anticipated for when the MUSC Shawn Jenkins Children’s Hospital opens later this year.

According to Dennis Frazier, longtime administrator for facilities at the campus’ hospitals – now retired and focusing his efforts on the Greenway – “Phase II is well underway right now.”

He said that its features will include attractive wooden decking around the trees for seating, two permanent kiosks operated by local restaurants to augment the on-site food trucks, free Wi-Fi, the capability for piped-in music and occasional live concerts.

There is an elevated walkway planned between the Ashley River Tower and the library to facilitate pedestrian access during inclement weather and flooding. New sidewalks will be installed and the Greenway itself may be slightly elevated to offset rising sea levels and tidal flooding.

Ultimately, the Greenway “will connect all the way from Ashley Avenue along Courtenay Street to the Crosstown, to and around Long Lake.”

And that’s not all. Frazier said bike lanes for two-wheeled travelers are also planned for the District. Canals, for water retention as well as their aesthetic qualities, are another option

As for the big picture, Frazier envisions an eventual pedestrian walkway that will connect many parts of the city.

“It will enable people to go safely and comfortably all the way from Hampton Park to the Battery,” he pointed out.

There is no dearth of other ideas the tri-hospital team and the City has under consideration for the Charleston Medical District Greenway, but much is contingent on funding; the downtown project is supported solely by “donations, contributions and grants.”

New York City may have scored great success with its landscaped High Line along the West side of Manhattan. But Charleston takes second chair to no city with its ambitious, welcoming and holistic Greenway.