The large framed photograph on the wall of Dr. Gustavo Leone’s office at the Hollings Cancer Center caught my eye right when I walked inside. It’s almost like a painting – a smear of color and lights depicted from a bus window during a rainy day in Hong Kong. Dr. Leone’s brother took the photo, and now it adorns the office as an artful token of their travels.

“It’s raining like crazy in the photo, but it almost doesn’t seem wet,” Dr. Leone mused, looking it over. “It’s like there’s sun in the street.” 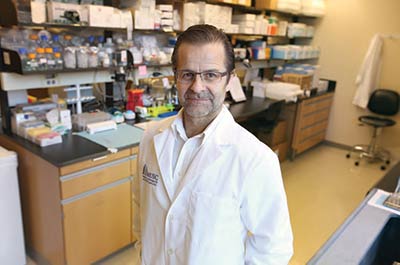 So began my interview with the well-known cancer research doctor, a man who certainly looks beyond the obvious in art as well as in medicine. A native of Montevideo, Uruguay, Dr. Leone has also lived in eastern Canada (Montreal) and later in western Canada (Calgary), where he obtained his PhD degree in molecular virology. Dr. Leone appreciated biology from an early age.

“It’s how things are connected,” he said, but he was not sure what to do with his interest, even in his undergraduate years. Fortunately, a helpful professor suggested applying for research positions, something that young Gustavo had not considered. After losing his father at the tender age of 14, he’d held “a lot of jobs before science,” from running a company that restored vacation rentals to creating graphic art for a sign company. So what was it about biology that lured him in for good? The opportunity to trace a medical problem to its earliest stages – to understand the root of illness, not just the body’s response.

“You have to put the pieces together,” he commented. “And something is always wrong before you go to the doctor; nothing is caught in the act.”

Inspired by his professor’s timely suggestion to pursue research, Dr. Leone ended up working in a lab that studied viruses at the University of Calgary in Alberta for two summers. Then, after obtaining his PhD, he had the opportunity to travel around the world and present his research. At a seminar in Berlin, he met “some amazing scientists” whose work on cancer-causing viruses was the pivotal moment in uncovering his post-doctorate path. He ended up relocating to the United States, specifically Duke University, and delving deeper into the correlations between viruses and cancer.

“Three different kinds of viruses affect our cells and cause cancer,” he explained. “Those three are the papillomavirus, the polyomavirus and the adenovirus. And the first gene to be affected by this group of viruses was the RB gene, or Retinoblastoma. The viruses inactivate the gene and the cells start dividing in an unregulated manner.”

While some cell divisions are normal inside the human body – our tissues have to replenish and heal constantly – a mistake in the process, either due to a viral infection or cell damage from toxins, can result in the early stages of cancer. Moreover, discovering the intricate causes of uncontrolled cell division has helped medical professionals realize that cancer begins far before any symptoms reveal themselves.

“Cancer develops over several years, and you might not realize it,” Dr. Leone affirmed. “It may take over 10 or 20 years, in fact, for these mutations to accumulate.”

Rather than feeling despaired at this information like I assumed I would, I felt intrigued. Just four months ago, Dr. Leone took on his new role as the director of the Hollings Cancer Center at MUSC, and his optimism about what the center is poised to accomplish rubbed off on me.

“As you know, we humans are equipped with anti-cancers, also known as immune cells,” he said. “But if you don’t take care of yourself, your immunity army is not as good.”

That’s where Hollings comes in: One of the strengths of the cancer center is in developing novel immunity therapy. According to Dr. Leone, the two-pronged approach in bolstering the human immune system response is a combination of classic immune therapy aimed at blocking tumor cells from inactivating the immune system, which was discovered years ago, and newer approaches that attempt to directly strengthen the immune system.

“Cancer creates a wall that your immune system has to battle,” he said. “Classic immune therapy attempts to remove that wall so the immune system can fight the cancer again. But if someone’s immune system is in no shape to battle the cancer – even with the wall absent – then it doesn’t work very well. At that point you have to boost immunity as well as remove the wall, thus the two-pronged approach.”

Dr. Leone spoke highly of the Hollings Cancer Center as a whole, and said that the progress being made will change the future of Charleston for the better. In his view, it’s imperative for residents of the Lowcountry – as well as its millions of visitors – to understand that science and medicine are making great strides here.

“There’s a perception that we are a little ‘sleepy’ here, but my goal as director is to get MUSC and Hollings to the top tier of science in the world,” he said, adding that MUSC has “brilliant physicians” to aid in such a journey.

“There is phenomenal research going on right now that will go a long ways toward improving clinical care of cancer patients, and fighting cancer matters to people,” he continued.

“It’s good to know that our city has a health care system that will continue to strive to improve the health of our population.”