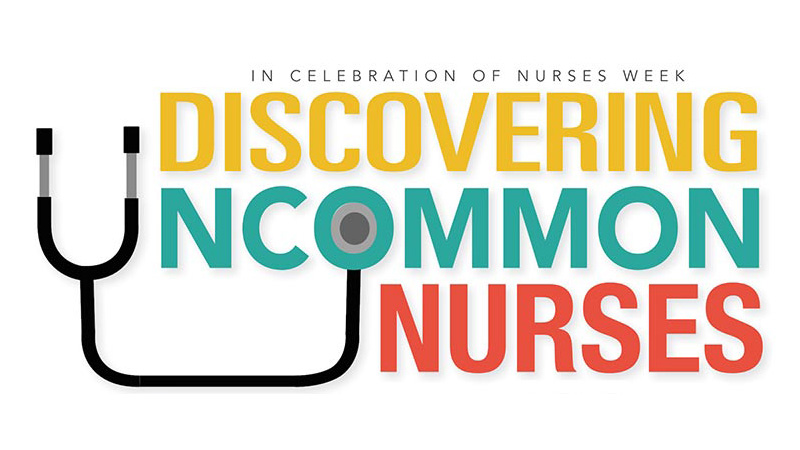 Nurses are all around us. We find them at our grandparents’ retirement homes; we find them taking care of our children at their school; and we find them in the office of every medical specialist, from cardiologists to plastic surgeons and from podiatrists to dermatologists. There’s always a nurse ready to assist you. We decided to highlight four nurses from fields that may seem a little out of the ordinary but that add a tremendous service to our community as a whole. 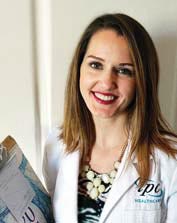 “Everyone tells you to do medical-surgical after nursing school. But I just knew that wasn’t going to work,” said Taylor Crews.

Psychiatric nursing stood out to Crews even in undergraduate school, and, by the time she did her first clinical rotation, she knew it was her calling. But it wasn’t until a serendipitous job offer brought her to rehab nursing that Crews realized the power of her psych nursing role.

“In a lot of nursing, you work more with the tubes and the machines and the drains. You’re still helping people, but it wasn’t the contact I craved,” she said.

Drawn to face-to-face interactions with patients and the complex balance of psychiatric medications, Crews called herself lucky to have landed a psych ward placement right after graduation.

“I was so passionate that they saw that and took a chance on me as a new graduate,” she said.

Crews’ passion led her to graduate school and her advanced practice registered nurse degree, through years at a county mental health clinic and, now, to a brave new world she never expected.

“Dementia is a totally different world,” said Crews, who took a leap of faith by accepting a rehab psych nurse job “out of the blue,” as she put it.

“They contacted me and told me how great the facilities were and how good the pay was. At first I thought, ‘This is too good to be true.’”

Crews not only stuck with rehab nursing, she progressed to be a psych nursing specialist who travels among Charleston’s many rehab centers. Connecting with an older demographic is even more rewarding than she expected psych nursing to be because it adds the often underestimated component of age.

“I was surprised at how little people know about dementia,” Crews commented. “It’s a little bit out of sight.”

Making sure psychological treatment doesn’t slip out of sight and mind is Crews’ passion now. She consults with nurses, doctors and families daily, visiting dozens of rehab rooms to bring psychiatric care to aging patients who might not have known they needed it and awareness to their entire health team.

“Psychiatrics shouldn’t be reactive, emergent or just urgent,” she said. “Treatment should start right away, before behaviors might get bad.”

“Seeing older patients suffering and untreated is the hardest part of rehab nursing,” said Crews. “It can be emotionally taxing if you don’t have the ability to separate yourself. If you can’t stop yourself from taking it home, you are not going to last.”

Crews’ passion for psych has lasted, though. Now, more than ever, she sees the results of her work, thanks to face-to-face treatment in the residential halls of Charleston’s rehab homes.

“You’ll see people change right before your eyes,” she said, echoing what drew her to psych nursing in the first place. “Someone who is completely psychotic one day will, a few days later, be clear and holding coherent conversation. I get to see that right in front of me.” 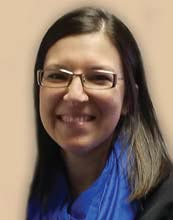 Being a school nurse was never Melinda Hamilton’s plan. A leukemia survivor, she knew from age 16 that a medical career was her calling, but she did not expect to be treating middle schoolers’ head trauma. Hamilton’s goal was adult oncology. When a school job fell into her lap right out of nursing school, though, she took it and hasn’t looked back.

“They called me at 5:30 one night to offer me the job, and I started the next morning,” Hamilton explained.

It’s all in the timing. For Hamilton, being a school nurse means her schedule aligns perfectly with that of her two school-age children, allowing her both family life and a full nursing career.

“This is the best option for me, and it did just fall in my lap,” she said.

Just after graduation, an acquaintance tipped her off about a job opening at the school her children attended. It’s rare for a new graduate to get a school nurse job, but Hamilton’s experience and family-oriented nature strengthened her application.

“I’ve been in the medical field since I was 16,” she explained. “I worked as a tech on the very floor I was cancer-diagnosed on and then as a medical assistant until I went to nursing school.”

Even her background and being a mother didn’t prepare Hamilton for what school nursing entails.

“People think it’s like ice and band-aids. Not at all,” she laughed. “If somebody is having an asthma attack, I can’t call pulmonary up. I don’t have that backup It’s just me.”

One nurse for nearly 1,100 students is a daunting ratio.

“I am the only medical professional in the building,” Hamilton said. “As an N1, you have a group to work with. I don’t have that.”

Charting, medications, calling parents and ambulances, and treating surprise head traumas all fall to Hamilton. She might not have the equipment of a hospital, but she plays all the roles of a full medical center – on a kid-sized scale. The most challenging aspect is not the technicalities or working alone though.

“Emotionally, it takes a bit of a toll,” she said. “If it were appropriate, I would adopt some of these kids. On the flip side, the best part is that we get to be a safe haven for them.”

Students come to her for their daily medicine or just to say hi, and she gets to see them grow through the grades.

“The kids know we’re there for them no matter what,” Hamilton commented. “We’re with them almost as much as their parents are.”

This responsibility is not right for everyone, she admitted.

“This was the right path for me, but I do believe that after medical school it’s a good idea to do two years of medical-surgical, for the experience.”

Being present for her own children makes Hamilton’s unconventional choice worth it for her. This way, she doesn’t have to choose between family, career and a regular schedule.

“Growing up, I either wanted to be a teacher or a nurse,” said Hamilton. “So I guess I get the best of both worlds.” 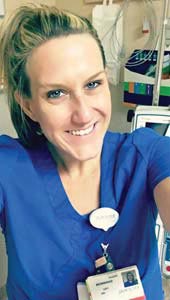 After nine years in the surgical intensive care unit and three years as charge nurse, Shannon Leigh-Ann determined that it was time for more sunshine.

“I decided, ‘Why not?’ You can always go home if it doesn’t work out,” she said of the day she chose to become a travel nurse.

“My days off I am at the beach. I’m going to see the manatees next week and super excited about that,” said Leigh-Ann. “I can always choose where I go next.”

From Nashville to Charleston and now Florida, Leigh-Ann is making her way along the East Coast. Three days of work and four days of what she calls “vacation” make for a flexible lifestyle and plenty of beach time.

Travel nursing is not all sunshine, though. Leigh-Ann recommended plenty of ICU experience to prepare for the challenges of assimilating to a foreign work environment.

“You have to have flexibility and the ability to walk into any new hospital, any unit and make it work while providing safe care to the patients,” she said. “ICU nurses have to know their stuff and have good time management. Ventilators, sedation, medications – you cannot afford to make mistakes.”

Leigh-Ann told herself she could always come back home. Sometimes, the familiarity of Nashville is enticing, especially when she’s trying to “show up as part of the team” at a completely new hospital with close-knit nurses and different computer systems.

“I miss afternoon patio time, country music and concerts in Nashville,” she said.

Trading consistency for constant challenge is rewarding enough to keep Leigh-Ann traveling though.

“A majority of my friends have gotten their masters and are now nurse practitioners or anesthesiologists, but I chose to hit the road and be a traveler. I like variety, new experiences, new people and new cities,” she explained. “And new food!” 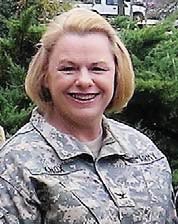 Technical terms are nothing new to nurses, but for Col. Marguerite Knox, medical commander for the South Carolina National Guard, there is an added layer of complexity. You won’t hear any nurse in a city hospital reference MEDCOM or MRC4, and Knox’s nursing practically revolves around MRC4.

Next month marks 28 years of service for Knox, who spends her days alternating between her nurse practitioner role and overseeing the entire South Carolina MEDCOM program, which is dedicated to ensuring the health of soldiers. Over the years, she’s come to understand the complexity of being a military nurse.

“Working for the military is much like working in the civilian world. Instead of taking care of civilians, you are taking care of soldiers and their families,” she said. “But nurses must remember that we are soldiers first and then nurses.”

Knox was raised with the soldier-first mentality, imparted to her by her father, a Navy and Air Force veteran who served in both World War II and the Korean War. Growing up, Knox heard her father speak about life on the battleship Missouri in WW II and as an air traffic controller in Korea, but what especially stuck was the benefit of the Guard.

“He taught me that I could work one weekend a month and two weeks out of the year and still earn a retirement through the National Guard,” she said.

Recent graduates can have their student loans paid off and be reimbursed for the money they spend on graduate degrees, which is a huge draw for many military nurses. Beyond that, Knox finds an inexplicable sense of fulfillment from working with soldiers who are volunteering their lives.

“Nurses who serve in a combat zone will see injuries and pathologies that other nurses will never witness even in a Level I trauma center,” said Knox. “Deployments and conflicts of war provide great learning experiences but can also leave some indelible memories.”

That is where MRC4 comes in. Medical Readiness Category 4 is a term applied to soldiers who are medically unable to serve, including those who are simply overdue for an annual checkup or dental visit. A high level of MRC4 soldiers can be devastating, and the task of ensuring a healthy military falls directly to nurses like Knox. Thanks to Knox and her MEDCOM unit, the number of soldiers unable to serve for medical reasons continues to decrease. Achieving that landmark is something Knox – and her father – can be proud of.