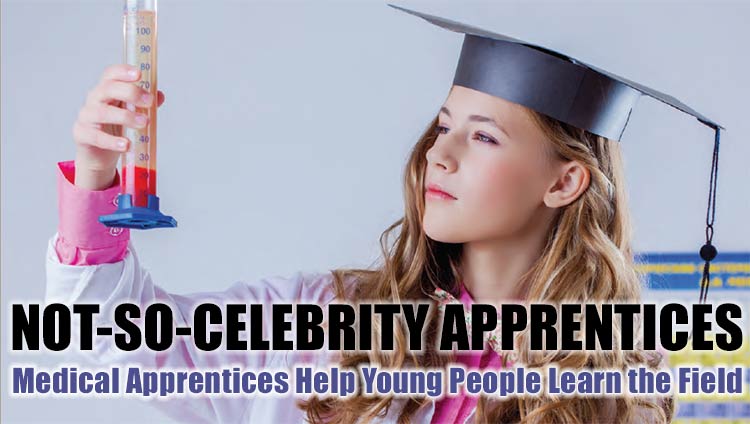 Every day, Charleston adds 45 new residents. Someone’s got to take care of all these people, which may be why the latest study shows that medicine is going to be among the hottest professions in the next few years.

According to the 2016 update to the Talent Demand Study sponsored by the Charleston Metro Chamber of Commerce and Charleston Regional Development Alliance, medical jobs will grow by 11.6 percent, one of the top sectors in the region. And, the study says, colleges can’t keep up with the projected demand for college graduates in those fields.

“Given that, you’d have to feel almost obligated to augment or increase the health science teachings,” said Richard Gordon, executive director of career and technology education for the Charleston County School District. “We have to offer something that is rigorous but relevant to real-world stuff.”

The problem is that not everyone has the money or the time to earn a medical degree.

Some colleges, such as the Medical University of South Carolina and Clemson University, are responding with accelerated degree programs that can get those medical experts out into the community more quickly.

But even in Charleston area high schools, some students are getting what is, in essence, a “quick pass” to a medical career, thanks to an innovative partnership among the high schools, the Chamber of Commerce, the medical community and Trident Technical College.

Back in 2014, Mitchell Harp, dean of apprenticeships at Trident Technical College, was approached by a German manufacturing company about starting an apprentice program in Charleston. At first, companies were reluctant.

After meeting with several local companies, Harp was eventually able to find six employers willing to hire young people. Now, the apprentice program has more than 122 employers in the Charleston area, and this year medical apprenticeships have been added to fill those gaps.

“Everything we do is employer-driven,” said Melissa Stowasser, Trident’s dean of School and Community Initiatives, which includes its dual-credit program.

The apprentice program is available to youngsters from 26 different Charleston-area high schools, as well as those who attend private schools or who are home-schooled. Rising juniors, rising seniors and even recent high school graduates are eligible.

On the medical side, Roper St. Francis, HealthSouth, East Cooper Regional Medical Center and Trident Health System are all taking medically-inclined students on board.

Students will be doing tasks directly related to their chosen field. Banish thoughts of interns languishing until someone needs a cup of coffee – these kids will be working.

While Harp finds the companies and Stowasser finds the students, it is really up to the employers to determine their needs and which student apprentices will best fill them.

The two-year apprenticeships are offered in areas including certified nursing assistant, pre-nursing, emergency medical technician and medical office assistant. All of the students work part-time during both academic years of the program and full-time during the summer.

The medical office assistant area focuses on administration, billing and some coding. Once the student finishes the apprenticeship, he or she ends up with a college certificate that is part of an associate degree and can continue taking courses leading to that degree.

“They’re working in an office and with insurance companies. There’s no contact of a clinical nature. It’s for students who are interested in the medical field but not interested in that contact. This is really geared toward physicians’ offices and clinics,” said Ellen Kaufman, Trident’s youth apprenticeship coordinator. “There are probably over 1,000 physicians’ offices in Charleston, so there’s plenty of work.”

The EMT track is open only to rising seniors and recent high school graduates because the minimum age for the licensing exam is 18, Kaufman pointed out.

“After the first year of classes, they’re ready to sit for their licensing exam in the spring, and then they spend the next summer as EMTs,” Kaufman said. “We’ve had them hired by fire departments in Charleston and North Charleston, and Roper hired two for Lifelink.”

“At the end of their second year, they’re an advanced EMT, and they can literally walk into the paramedic program if they want and go for the associates in applied sciences and paramedic science,” Harp said.

The pre-nursing students start with certified nursing aide and patient care technician course work through Trident’s Continuing Education program and then, in the spring of their first year, begin academic nursing prerequisites such as anatomy and physiology while working as part-time patient care technicians. Those academic courses earn them dual credits at the high school and at Trident.

“They’ll be doing EKGs, phlebotomy and patient care tech programs,” Harp said. “They get all those advanced in-hospital skills you would need to have if you were a patient care technician.”

Not only are all of the apprentices paid for their work, but the Chamber of Commerce ensures funding for the students’ tuition, fees and supplies such as scrubs or stethoscopes.

At the end of the apprenticeship, successful students will have earned not only their high school degrees but also two years of paid employment and mentoring from someone in their chosen field; a year of college credit from Trident that can be applied to an associate degree; and a national credential from the United States Department of Labor.

For those wanting to go on to a nursing degree, the apprenticeship allows them to head directly into the nursing program at Trident, Kaufman said, adding that the program normally has a waiting list.

Still, it’s a full load, often meaning that students won’t have time for “normal” high school extracurricular activities. The apprenticeship program is not for everyone.

“I actually did have a nursing candidate’s family ask me what will they be expected to do – will they be bathing men? The answer is yes, that is what nurses do,” Kaufman said. “This is not a special course made softer because they are high school students.”

Stowasser said Trident works carefully with the high school to make sure the students are OK and added, “Ellen mothers them to death. She follows up with students, makes sure they’re registered with classes, checks on their progress with faculty and calls the high schools when they’re having issues so counselors can pull them in and talk with them.”

Kaufman laughed when she heard this assessment but admitted that she does take care of the apprentices.

“The demands are significant, but so are the rewards.” Stowasser agreed about the rewards.

“These students are being paid to learn,” she said. “This is so much better for you than a burger joint or pushing carts out of a parking lot in a grocery store. They obtain a skill set that makes them immediately employable in high-demand careers in our region.” 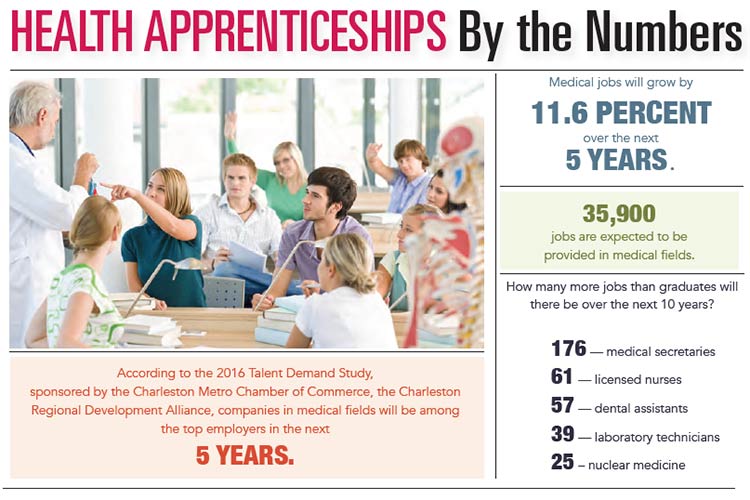