There are times when something as simple as peace of mind can go a long way toward making life a little more enjoyable, a little less stressful and a whole lot easier. Such was the case for Massachusetts resident Frank Gabriau, who attended the recent Charleston Health & Wellness Expo and found out how important a brief screening can be. 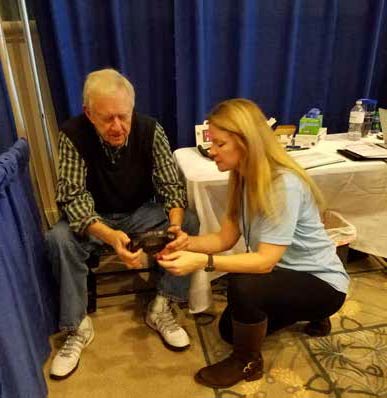 Gabriau and his wife, Debbie, were visiting Charleston when they heard about the Expo, held Jan. 9 and Jan. 10 at the Gaillard Center. Debbie wanted to check it out; Frank was less enthusiastic about spending part of his vacation learning how to establish a healthier lifestyle.

Though he recently had a major operation back home in Shrewsbury, Massachusetts, he was feeling fine – until his wife talked him into having his blood pressure checked at one of the MUSC booths. The numbers were “off the charts,” in the 201/101 neighborhood, Frank remembered.

The Gabriaus left Charleston and headed out to the Isle of Palms, where their daughter and son-in-law have a home, and took a walk on the beach. The next day, they decided to return to the Expo because Frank was a little concerned about a sore on his forearm. An MUSC doctor took a look at it and determined that it wasn’t melanoma. But Debbie, still worried about her husband’s blood pressure, convinced him to have it checked again. It was still much higher than it should have been, even though Frank was already on blood pressure medication.

With the numbers still way higher than normal, Frank called his doctor in Massachusetts, who arranged for him to start taking a more powerful dose of his blood pressure drug.

“The more I think about it, I’m actually glad I went to the Expo,” said Frank, who is 68 years old and had never been to a health fair before. “I’m happy I did because it probably saved me from having a stroke, which scares me more than dying.”

The Expo, in its first year, was produced by the Cooper River Bridge Run, HealthLinks Charleston magazine and the city of Charleston. The presenting sponsor was MUSC.

According to Charleston Mayor John Tecklenburg, “Our goal is to increase health awareness by providing health screenings, activities, materials, demonstrations and information. And to motivate our citizens to make positive health behavior changes.”

Janis Newton, director of the MUSC Wellness Center, is confident that the Expo exceeded its goal.

“It was a great success,” Newton said. “It was very professionally done. It was a first-time event, so the main thing is that people know about it, and I think Julian Smith, director of the Cooper River Bridge Run, did an excellent job on that. I’ve talked to a lot of people who wanted to go but didn’t make it this year.”

And what did the more than 2,500 people who attended and interacted with 90 vendors get out of the Expo?

“They got the motivation to make a change in their life and the ability to look a little closer at themselves and see where they are right now and where they should be,” Newton added.

Michele Hensel of Lowcountry Beauty and Wellness Spa in Mount Pleasant was a vendor who also appeared during the Expo on “Lowcountry Live,” the ABC News 4 television program. Noting that around 1,000 people visited her booth during the two-day event, she agreed that the Expo was a success.

“The people who came out really wanted to learn about what different businesses had to offer for their health and wellness,” Hensel remarked. “Having ‘Lowcountry Live’ there was a big deal. We had people coming up to us who saw us on TV and came out just because of that.”

She added that the live demonstrations available at the Lowcountry Beauty and Wellness Spa booth also were a big draw for Expo attendees, and she said she is looking forward to having a booth at next year’s show.

Local businessman John Winthrop was impressed with the Expo as well, so much so that he wrote a check to help make sure the event returns for a sequel in 2018.

“It was a wonderful extension of MUSC’s efforts and a winwin situation,” he said. “I spent two days there, so I thought I should give back a little bit.”

Smith, the Bridge Run director, is confident that the Charleston Health & Wellness Expo will be bigger and better in 2018.

“The participants and vendors were very happy with the whole thing. It was really good to have all the practitioners in the area come out and offer their services to the community,” Smith said. “Next year, we’ll grow the numbers. We had a very short window to promote the event. Next year it will be a lot bigger.”