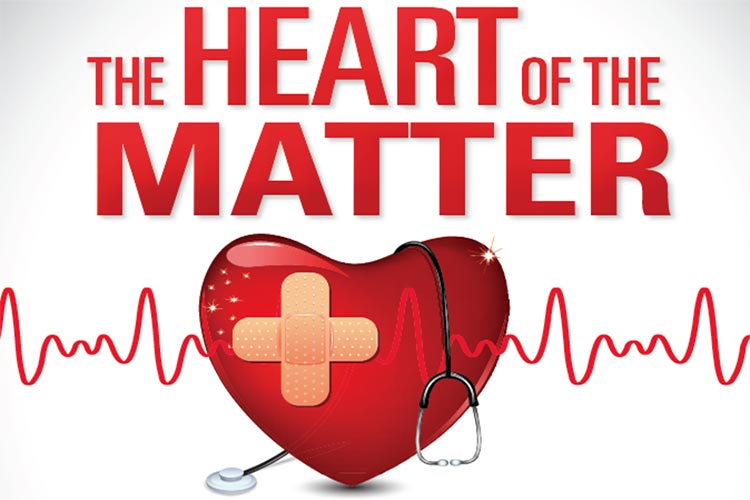 “It’s the big one, Elizabeth!”

It was the running joke on the old sitcom “Sanford and Son.” Redd Foxx would clutch his chest as though he was having a heart attack. In the show, it was comic relief. In real life, heart disease can be deadly.

Cardiovascular disease can occur at any stage of life but becomes increasingly common as we age. It is the number one cause of death for both men and women. More lives are lost to heart disease than all forms of cancer. Survivors of stroke and heart disease number more than 86 million in the United States alone.

The statistics are staggering. Many people die prematurely, but it takes a heavy toll on the millions of survivors who deal with issues such as lifelong medical care, high medical bills and loss of income. These diseases are so overwhelming, affecting relationships and increasing the incidence of psychological problems such as depression.

Heart disease is a general term that covers a variety of problems with the heart itself and with vessels that carry blood to every part of the body. Atherosclerosis is a common condition that occurs when plaque builds up, causing narrowing of the arteries, which decreases the flow of blood. Plaque is a combination of cholesterol, fat and other substances that stick together. If a piece of this plaque breaks off, a clot can form, stopping the blood flow, which can cause a heart attack or a stroke.

Heart Attack: As blood flows through the body, it brings oxygen to the organs. When a clot stops the normal flow to the heart, it starves the heart of oxygen – this is called ischemia – resulting in a myocardial infarction, which is, in lay terms, a heart attack. The longer the heart goes without oxygen, the greater the damage.

Heart Failure: Congestive heart failure occurs when the heart continues to pump but at a slower rate, leading to a lack of oxygen and blood.

Arrhythmia: This is a condition where the heart beats too slowly or too quickly.

Heart Valve Problems: These include heart murmurs, which can be harmless or a precursor to a more serious problem, such as stenosis, regurgitation, prolapse or atresia. Valves may be too narrow or leaky or malformed to allow for proper blood flow.

Cardiac Arrest: Cardiac arrest differs from a heart attack in that it is not a blood-flow problem but rather an electrical issue that causes the heart to stop beating. Any heart issue is an emergency, but cardiac arrest can cause death within minutes without immediate medical attention.

Stroke: There are two types of stroke. An ischemic stroke occurs when a blood clot stops the blood flow to the brain. The longer the brain is starved of blood and lifesaving oxygen, the greater the damage. Transient ischemic attacks, also known as a TIA or mini-stroke, are temporary blockages of a vessel that last a few minutes with no permanent damage. Hemorrhagic stroke happens when a blood vessel ruptures and causes bleeding in the brain. There are two types of hemorrhagic strokes: aneurysms, when a balloon in a weakened vessel ruptures, and arteriovenous malformation, which is when abnormal vessels rupture.

Do I have heart disease?

If you have a family history of heart disease, you probably worry about the risk of a heart attack or stroke. How can you find out?

“If you have high cholesterol, high blood pressure, diabetes, are overweight and smoke and drink too much, the CT scan is an easy way to learn your cardiac score,” Dr. Olofsson said.

The computed tomography (CT) scan records images of the heart and the surrounding arteries. The coronary arteries carry blood to the heart, and if calcium buildup is seen in these arteries, it is an indicator of possible heart disease. The lower the cardiac calcium score, the better.

“The risk is stratified,” Dr. Olofsson said, adding that a moderate to high score might suggest that lifestyle changes can help lower the risk of future heart problems.

Cardiac calcium scores start at zero and can be more than 400. People with very low scores – the closer to zero, the better – are considered to have a low risk of heart attack. Those who receive a score of 100 to 400 have a medium risk of having a heart attack within five years. People who have the risk factors and are severely overweight and sedentary will generally have a score of 400 and up, putting them in a high-risk category.

The calcium scan is not a routine test and is generally used when physical exams and other tests indicate the need.

How can I save myself?

Start with your primary care physician, who can assess your risk and offer advice on lifestyle changes, which include:

Those who have high blood pressure or high cholesterol may require medication in addition to lifestyle changes.