“There is no clear way to tell when or if it will surface in an individual. What we do know is that risk increases with age, particularly in the population over 60 years old.”
One half of all chickenpox cases occur in children ages 5 through 9. Conditions such as this last from two to three weeks, and, when it’s all over, the only evidence of its red, itchy sores might be a small scar or two. Almost everyone gets chickenpox; it has been estimated that only 10 percent of Americans over the age of 15 have never suffered through the symptoms of this illness. 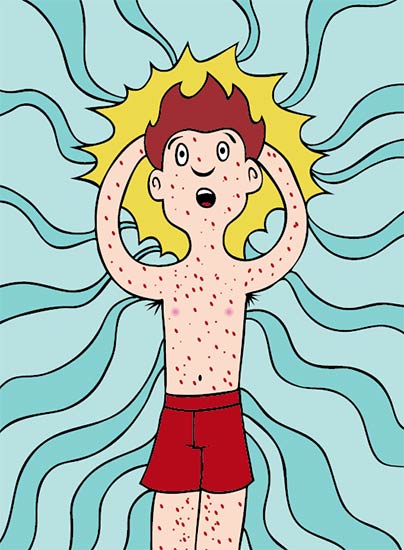 Does that mean that the same fate awaits almost everyone in adulthood? Is shingles really chickenpox, round 2? What’s the association between shingles and chickenpox?

“Not everyone who had chickenpox will get shingles,” according to Todd E. Schlesinger, MD, FAAD, medical director of the Dermatology & Laser Center of Charleston and a board-certified dermatologist.

“There is no clear way to tell when or if it will surface in an individual. What we do know is that risk increases with age, particularly in the population over 60 years old.”

Some studies show that the way the body assimilated the chickenpox virus will determine an individual’s immunity to shingles. There is evidence that if you did not have a full-blown case of chickenpox, the virus reactivates later in life as varicella zoster, also known as shingles. So where do shingles hang out all these years?

“Shingles lay dormant in the cell structure and may erupt decades later, brought on by known and unknown variables,” Dr. Schlesinger explained.

“Shingles appears usually as a band of blisters that ooze and itch on one side of the body, most likely the trunk and extending upward across the back. It may have one band or several zebra-like bands. Shingles can be quite painful as well,” he said.

The most common ways to treat shingles are with antiviral medications, steroids and topical agents. Medications that act on the nervous system to reduce the post-shingles pain are also used. Shingles typically lasts for three to five weeks, and the severity and duration can be significantly reduced with early treatment.

Dr. Schlesinger pointed out that there is a vaccine for Shingles. “The varicella zoster vaccine – Zostavax – produced by Merck, has been approved by the Food and Drug Administration for adults age 50 and older but is most often recommended for those 60 and older. Research has shown that giving older adults the vaccine reduced the expected number of later cases of shingles by half,” he said.

He added that severity and complications are dramatically reduced for people who receive the vaccine but still get shingles.

Dr. Schlesinger said some people should not take the vaccine – “Those with a weakened immune system, allergic to the components of the vaccine’s administration (gelatin) or allergy to neomycin.”

According to Dr. Schlesinger, a million people are diagnosed annually with shingles. He said 1 percent to 6 percent of patients who have had shingles might get it again.