Will WestEdge be a magnet for innovative companies that find it convenient to be within shouting distance of downtown Charleston’s Medical District? Is it destined to create a vibrant urban environment where residents can live, work, eat, shop and enjoy an active and healthy lifestyle? Is it going to have the potential to keep talented college graduates from having to choose between a lucrative salary and the quality of life offered in the Lowcountry? 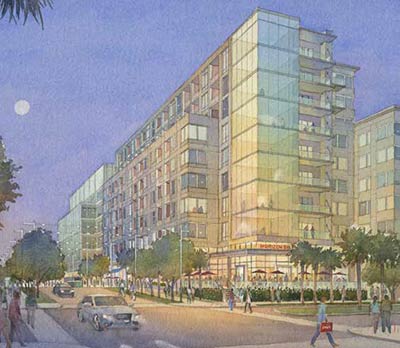 It will be all of the above, according to Michael Maher, chief executive officer of the WestEdge Foundation, a nonprofit organization established in 2011.

“The vision is to create a biotech research district, an urban place to live, learn and earn,” said Maher, an architect who has been in his current job since 2013.

Work is already underway on the 15-year project, located just north of the Medical District. Three entities, the city of Charleston, MUSC and the MUSC Foundation, will have control of over 26 of the roughly 60 acres bounded by Lockwood, Fishburne, Hagood and the Septima Clark Parkway. The sector is already home to the Harborview Office Tower, a Holiday Inn Express, a Marriott hotel and a city municipal complex.

All workplaces will have a bias toward biotech and research, according to Maher, and “all who want to be in that environment will have a place in WestEdge.” He pointed out that even though MUSC might recruit companies to set up shop in West- Edge, it won’t be an extension of the nearby MUSC campus.

“It won’t be just medical research,” Maher said. “Lots of innovation in health care is actually in software development. The future of medical research is not just a white-coated researcher in a lab.”

The idea to develop the area near the Medical District was first discussed in 1998 in a comprehensive plan for downtown Charleston, but it was 16 years before the master plan for WestEdge was put together. 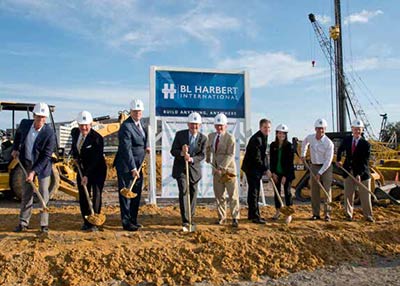 Ground was broken on the first project in March 2016. When it is completed, probably in October 2017, 99 WestEdge will include 230 apartments, 25,000 square feet of retail and restaurants on the ground floor and a 950-car parking deck. At 10 WestEdge, started in October 2016 and slated for completion in October 2018, there will be 350 apartments, a 900-space parking garage and a 45,000-square-foot Publix grocery store, along with another 25,000 square feet of retail and restaurants.

Construction was scheduled to get underway this spring at 22 WestEdge. MUSC probably will be one of the tenants in the office building, which will also have street-level retail and restaurant space. It is expected to be completed in the second quarter of 2018.

Maher said when all of WestEdge is finished in 15 years or so, around half the complex, in the neighborhood of 2,000 apartments, will be residential, while a third will be offices and the rest retail and places to eat.

Maher pointed out that many WestEdge residents will be able to walk or bicycle to work, to the grocery store and to a wealth of restaurants and retail establishments. Meanwhile, Brittlebank Park, Hampton Park, Harmon Field, the Ashley River and Joe Riley Park, home of minor league baseball’s Charleston RiverDogs, also are nearby. 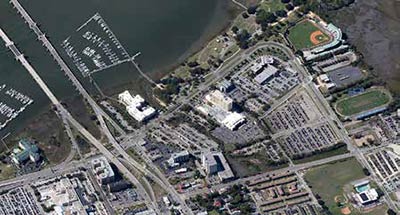 “It’s about people living a healthy lifestyle and creating an environment that supports that,” Maher commented. “Proximity really supports a healthy way of life. If you aren’t stuck in traffic, that’s psychologically healthier.”

“Living close to work, restaurants and retail is a more desirable way of life. WestEdge will be a vital urban place. Up until now, the area hasn’t developed like the rest of the city has,” he added.

Being able to walk instead of drive is certainly a plus for those who choose to live, work and shop in WestEdge, but, according to Maher, the success of the project might be judged by whether it spawns the high-paying jobs that keep talented college graduates from leaving the Lowcountry for greener – as in money – pastures.

“The most important thing to me is its economic development power,” Maher remarked, pointing out that WestEdge will be a public/private partnership, with private companies investing in the neighborhood. “We have created a place that’s desirable to live, particularly for young people. But as attractive as we are to that talent, we don’t have the career challenges. People come to the College of Charleston, for example, and stay here, but they’re not finding career challenges. They don’t see their long-term future in Charleston.”

“Those who come here for the lifestyle don’t have the ability to stay here for a challenging and economically successful career,” he added. “They can’t earn the kind of wages their talent should provide for them. We shouldn’t lose the talent that comes to Charleston for the quality of life because we can’t challenge them with equally high-quality career opportunities.” 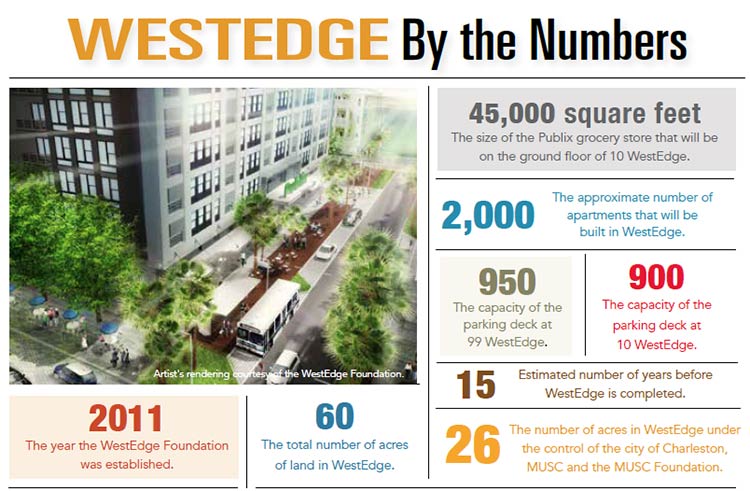