A variety of things come to mind when you hear the words inhaler, heaving, gasp and wheezing. Many people think of asthma as a problem that primarily affects children. But, in fact, asthma is a chronic disease that plagues both children and adults, and its symptoms or triggers are so varied that some people don’t even realize they have it. Meanwhile, many others are commonly misdiagnosed with the condition.

“Some common symptoms are coughing at night or coughing with exercise. More severe symptoms — wheezy breathing, tightness in the chest, feeling short of breath or feeling pain or irritation in the airways when you breathe — can be good indicators of asthma, but many people do not exhibit those symptoms. Sometimes a simple cough that won’t go away is the only symptom,” explained Dr. Meredith L. Moore, an allergist and immunologist with Charleston Allergy & Asthma. “Symptoms can be intermittent and vary in severity, triggered by exposure to cigarette smoke or a virus like the flu or even by activities like exercise. Other people with persistent asthma struggle every day but have worse symptoms when they’re exposed to those triggers.”

Children can develop asthma that is triggered by respiratory illnesses as simple as a cold, with persistent coughing or wheezing afterward that can last for weeks or longer, depending on the severity. 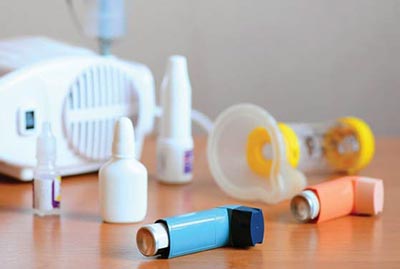 “For young children with asthma, we often see some improvement when they are school-aged. As they get bigger, their immune system improves. Typically, the kids who have asthma that gets better generally do not have other allergies,” Dr. Moore continued. “If the child has eczema, food allergies or a family history of asthma, it’s less likely the asthma will improve.”

While asthma affects between 9 and 10 percent of children, it is less common in adults, affecting about 8 percent of the adult population. Adult asthma rarely completely resolves.

There are many other diseases that can masquerade as asthma based on initial symptoms:

GASTROESOPHAGEAL REFLUX DISEASE
Also known as heartburn or acid reflux, GERD can cause asthma symptoms – particularly coughing – when stomach acid travels up the esophagus and irritates the airways of the lungs.
CYSTIC FIBROSIS
An inherited disorder that affects several organs – especially the lungs and pancreas – by clogging them with thick, sticky mucus which causes shortness of breath, a chronic cough and repeated chest infections.
ALPHA-1-ANTITRYPSIN DEFICIENCY
An inherited disorder that can cause lung disease and liver disease, usually diagnosed between the ages of 20 and 50. Early symptoms are shortness of breath following mild activity, a reduced ability to exercise and wheezing.
VOCAL CORD DYSFUNCTION
An abnormal closing of the vocal cords when breathing. It can be triggered by lung irritants or exercising and is common in athletes.

The chronic disease can be treated with medication and also by avoiding triggers. Albuterol inhalers help open the airways when symptoms occur, while other inhaled steroids are used daily to prevent symptoms from occurring.

Because the majority of patients with asthma also suffer from allergies, which often can trigger an asthma attack, allergy shots are used in some cases to relieve the symptoms of asthma.

If you experience persistent coughing or any of the more severe symptoms, Dr. Moore suggested consulting a specialist for a lung function test. The coughing, she said, does not need to be limiting but can be unusual, such as coughing for 10 to 15 days rather than just a day or so following a cold.

“In recent years, studies have shown that about 50 percent of children and 30 percent of adults who were told they suffer from asthma were actually misdiagnosed. In primary care, lung function testing is not immediately available, and asthma can be overdiagnosed,” she said. “There are a number of lung function tests that can be done in an office that specializes in asthma by looking at the patient baseline, doing a treadmill test that focuses on lung function. Patients as young as two can be tested.”

Patients who do have asthma should see their doctor regularly to continuously work toward the best and most effective treatment for their unique triggers and condition.

“Your asthma specialist should want to see when it flares up to have a good idea of exacerbations and direct treatment. They also want to see when it’s under control to make sure everything is fine. We rely on symptoms to suggest that asthma exists, but it’s important to have an objective measure. Spirometry is a measure of air flow through the lungs, and following this measure over time helps us know how well your asthma is controlled,” Dr. Moore pointed out.

If you suspect you have asthma, contact an asthma specialist for a lung function test and start breathing a sigh of relief. Proper treatment can significantly improve your quality of life.