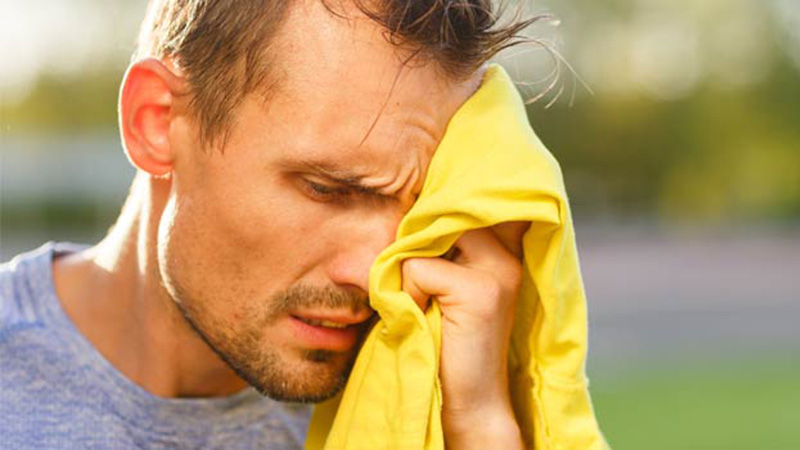 With obesity rates and related diseases on the rise, how could too much exercise be bad, given the number of people who aren’t exercising at all? It is possible to have too much of a good thing – even when it comes to physical fitness?

Not giving your body a chance to rest and recover, skipping stretching or working the same muscle groups daily can contribute to overexercising, which can lead to muscle strain or stress fractures.

When Don Oswalt was training for the Ironman Triathlon World Championship last October, he enlisted the help of a coach to ensure he wasn’t pushing himself too hard. She regularly asked how he was feeling or if he was doing too much.

You can really break your body down if you don’t give it time to rest and recover so you can go hard the next time, he said.

Oswalt ramped up his Ironman training in March 2016 – about seven months before the competition. In the final month leading up to the race, he was training 20 hours a week, resting only on Sunday. It was a part-time job, he said.

Some workouts were more intense – a six-hour bike ride on a Saturday – and others were active recovery days with shorter swims, bike rides or runs, along with some lighter strength training.

“I was still doing something, but I was not tearing my body down,” said Oswalt, who works in sales at Nelson Printing.

Gearing up for a competition like the Ironman, with hours of ocean swimming, biking and running ahead of him, Oswalt took his training seriously, but he also recognized the importance of listening to his body and getting extra rest when he needed it.

“You know your body,” he said. “You can sense when you’re tired or not into a workout. It won’t kill you to skip a workout.”

Oswalt’s total Ironman time was 10 hours, 42 minutes – placing him 52nd among 200 competitors. He hopes to tackle the Ironman again but for now is doing some shorter races and staying active by hitting the gym, swimming and biking on the weekends.

KEEP UP THE CROSS TRAINING

The kind of cross training Oswalt incorporates into his fitness regimen is key to avoiding the injury that often comes with getting too focused on a singular sport, doctors say.

“Athletes who only run or play tennis, for example, need to mix up their routine to ward off repetitive motion injuries,” said Dr. Todd Lansford, a spine surgeon at South Carolina Sports Medicine & Orthopaedic Center. “Activities like yoga, strength training, rowing and swimming are all great ways to get in physical activity and vary the routine.”

He also suggested adding in isometric exercises like planks that strengthen the core without a repetitive motion.

Dr. Bright McConnell III with Charleston Sports Medicine said people just starting exercise might suffer injuries because they did a movement the wrong way or they are working out too intensely and not giving themselves time to rest.

“Overtraining syndrome tends to occur among people who are accustomed to exercising and have increased their workout intensity either for a competitive event or it’s just in their DNA,” Dr. McConnell said. “When planning workouts, think about frequency, intervals and time between sessions. Varying exercising and training methods while giving the body and muscles time to rest between workouts is most important.”

KNOWING WHEN TO SCALE BACK 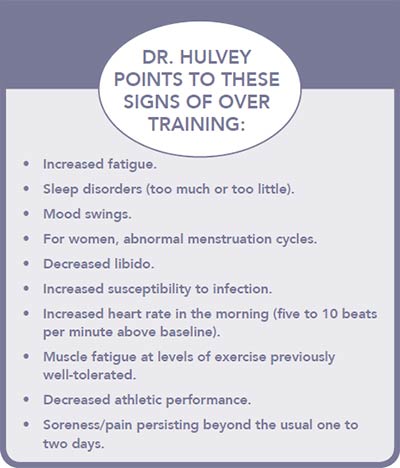 Dr. Hulvey tells his patients who are experienced runners that 25 miles a week is the threshold. Beyond that, he sees more overuse injuries such as stress fractures.

“Seven days a week of vigorous exercise is hard on the body,” he said. “So a good rule of thumb is two days of exercise, one recovery day with a lighter workout and then two more days of exercise.”

Dr. Hulvey also recommended not repeating a specific workout without at least 48 hours in between.

“For example, run on Sunday, resistance training Monday, run Tuesday, rowing machine Wednesday, resistance Thursday, etc.,” he noted. “The more variety you can get into your routines, the better off you’ll be.”

It’s not uncommon to feel sore after working a new set of muscles or feel tired after a longer training session. But symptoms that persist could indicate that you’re overexercising.

Dr. Matthew Murrin, a sports chiropractor and exercise physiologist at ChiropraticUSA in Mount Pleasant, said that the rule of thumb is to give it 72 hours. If you are still experiencing pain, not just soreness, it is time for a long overdue rest.

“If you aren’t sleeping well as a result of overtraining or you are experiencing anxiety and/or decreased cognitive function, that’s a telltale sign you are doing too much and need some recuperation time,” Dr. Murrin said.

Dr. Lansford said a muscular injury typically will resolve itself in 48 hours. But nerve pain, shooting pain down the arm or leg, is cause for concern. Any weakness associated with pain should be checked out by a physician.

“If you injure a muscle, especially in the back, keep moving,” he said. “You don’t need to exercise but do stretch so the muscles don’t tighten and feel worse. A chiropractic consult will identify if it’s a nerve issue or muscle issue and what course of care is best for you for fastest recovery.”

Dr. Murrin has seen many patients at his chiropractic office who are seeing the effects of overtraining.

“You have to rest. The body may need two solid weeks of rest depending on how hard the athlete pushed themselves and for how long,” he said. “They will notice that their body is not benefiting but actually losing muscle and getting weaker.”

“We’ve developed a sequence to help you get a deeper stretch than you can get on your own,” he said.

“Stretching allows the muscle to repair itself,” he added. Isaacson’s customers are professional athletes and non-athletes of any age. After a few sessions, many are reporting improvements – a better marathon time or a heavier squat.

While the benefits of regular physical activity can’t be disputed, it’s important to focus on varying the exercise, building in recovery time and stretching exercises to keep your body in peak condition and avoid an injury that could derail your workout routine. Finding the appropriate blend is something Ironman competitor Oswalt learned in his training season.

“I think I found a good balance of not overtraining,” Oswalt said. “It’s about listening to your body and making sure if you need to slow down, you slow down. It’s hard, especially if you’re competing at a high level.”

The trick, he said, is keeping it all in perspective: “It’s not my career. You find a balance as with everything in life.” 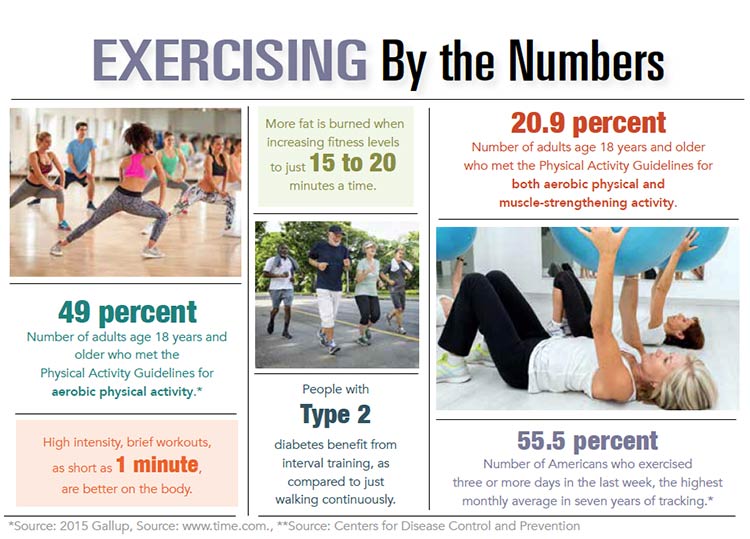