Stephen Porter has been earning his living in the health care industry since 1995, but he readily admits that he doesn’t have all the answers when it comes to dealing with the many issues facing the ever-changing health system. He is certain, however, that the problems currently being discussed, debated and deliberated in Washington, D.C., and across the country won’t be completely solved without input from all parties involved in what has been a lengthy and contentious exchange of ideas. 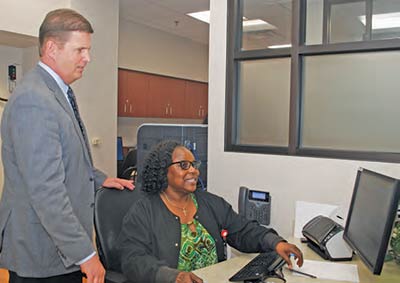 “We all have to come together and look at all aspects of the situation – physicians, hospitals, politicians and patients,” said Porter, who started his new job as chief executive officer at Bon Secours St. Francis Hospital in Charleston in July.

“Decisions have to be made that will change the way health care is provided. It’s not a Democrat or a Republican issue,” said Porter, who moved to the Lowcountry after serving as corporate vice president of the Northern Virginia Region at Sentara Healthcare and president of Sentara North Virginia Medical Center.

Porter pointed out that all hospital systems in the United States face similar challenges, including providing access to high-quality health care to uninsured and underinsured patients and dealing with government programs such as Medicaid and Medicare that have a limited amount of money to spend. 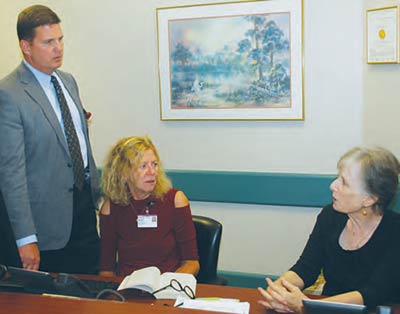 The new CEO estimated that 50 to 60 percent of the business of most hospitals is tied to government programs. He said that number is probably 45 to 55 percent at Bon Secours St. Francis. Regardless, he said an important goal is to increase the number of people who have access to some type of health insurance.

“The more people who are covered, the better it is for the communities we serve and support,” Porter said. “The question is, how do you create value with the dollars that are available? We need to improve efficiency, embrace technology and provide the right care at the right place at the right time.”

Porter, who earned a bachelor’s in Business Administration at James Madison University and a master’s in Health Care Administration at the Medical College of Virginia, said both the demographics of the American population and the way health care is delivered have changed since he landed his first job in the industry. He said 60 percent of health care dollars are now spent on people 55 and older, while the technology now common in pharmacy, genetics, robotics and other areas is “incredible.”

“We were paying physicians to manage populations. We didn’t have the information or the technology we have today. There was no coordination between components of the health care system,” he said. “Now we’re back to the fee-for-service model. From what I’ve seen, we’re coming back to kind of where we were 20 years ago.”

He added that there is now a focus on satisfaction, rather than simply concentrating on treating the patient’s symptoms.

“In the past, health care was less patient-centric,” he said. “It used to be treat the patient. Now it’s deliver great quality and the best experience possible.”

Porter pointed out that obesity, cardiac issues and mental health are the three most pressing health care issues, adding that these and other health problems need to be addressed by providing access to quality care.

“It’s not a hospital issue alone. We must partner with others,” he said.

Along those lines, the system of which Bon Secours St. Francis Hospital is part of recently opened a facility in North Charleston that will offer non-emergency care to patients who otherwise would visit local emergency rooms. The services available at Roper St. Francis Rivers Avenue will be provided by referral and appointment only.

In addition to connecting local residents with preventive care, social services and routine medical needs, the facility will provide access to hot showers, a computer lab so they can apply for jobs and clothes suitable for job interviews.

All this is part of an effort to provide the best health care possible, within the financial parameters of today’s health care system.

“We do need changes; we always have to reinvent ourselves,” Porter said. “That’s how we become better providers of health care. We’re always striving to be the best.”

“I’m extremely impressed with everyone here at Bon Secours St. Francis,” he concluded. “It’s a great environment. Our goal is to continue to lead and to make sure we’re here doing the same thing 50 to 100 years from now.”