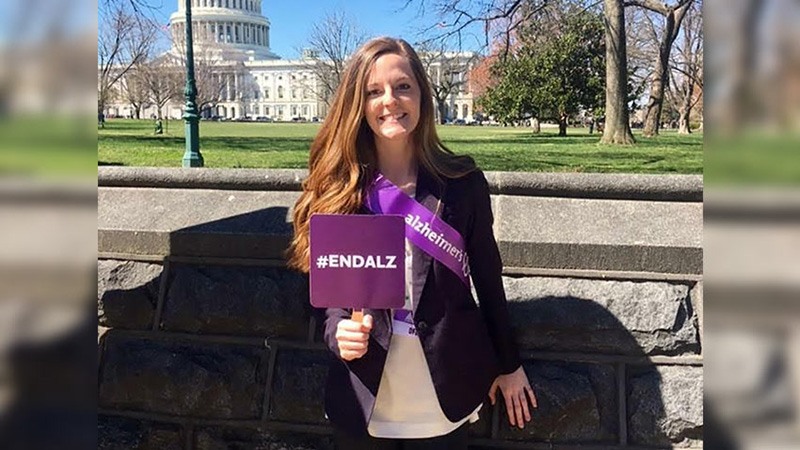 How the Alzheimer’s Association Can Help

Zoe Watkins saw the effects of Alzheimer’s disease on a loved one when she was just 17 years old.

She had finished high school a year early and delayed college to help care for her grandmother, who had Alzheimer’s, the most common form of dementia. Her grandmother’s memory was failing, and she had fallen and injured herself. She could no longer live alone, but she did not want to leave her home.

Alzheimer’s disease does not just take away a person’s health and ability to care for themselves, Watkins said.

“It strips them of who they are,” she said. “We work our entire lives making memories and building a life with the people we love. No disease should ever take that away.”

Watkins has joined the Alzheimer’s Association in its mission to eliminate Alzheimer’s disease through the advancement of research, to provide and enhance care and support for those affected, and to reduce the risk of dementia through the promotion of brain health.

Dementia refers to the loss of memory and other cognitive functions. Alzheimer’s disease accounts for 60 to 80 percent of dementia cases, according to the Alzheimer’s Association.

Alzheimer’s is the sixth-leading cause of death in the United States, and there is no known cure. South Carolina has the second highest mortality rate from Alzheimer’s disease, at 45.3 percent, according to 2016 data from the Centers for Disease Control and Prevention.

Watkins’ commitment to the Alzheimer’s Association recently took her to Capitol Hill to ask legislators for additional money to help fight this debilitating disease.

“We need research funding to help establish better treatments, early detection and to raise awareness that this is not a normal part of aging and doesn’t just impact ‘old people,’” Watkins said.

Last fiscal year, the Alzheimer’s Association made research grants totaling more than $28 million to nearly 130 scientific investigations. Since 1982, it has invested more than $405 million in more than 2,600 projects.

Along with raising money for research, the Alzheimer’s Association offers support and resources for people dealing with the disease. Last year, the Alzheimer’s Association provided care and support to 3.6 million people across the country, according to its annual report. Resources include a 24/7 helpline, clinician courses and a free online community for people with dementia and their caregivers.

An estimated 16 million people in the United States are caregivers to individuals living with Alzheimer’s and other dementias, according to the Association.

The Alzheimer’s Association invites the community to register for the Charleston Walk to End Alzheimer’s on Sept. 15. All are welcome at the event kickoff party – caregivers, those who have lost loved ones to the disease, families, businesses, faith-based organizations, civic organizations and anyone wanting to join the movement to end Alzheimer’s. Register at alz.org/walk.

For more information on the Alzheimer’s Association, visit www.alz.org.