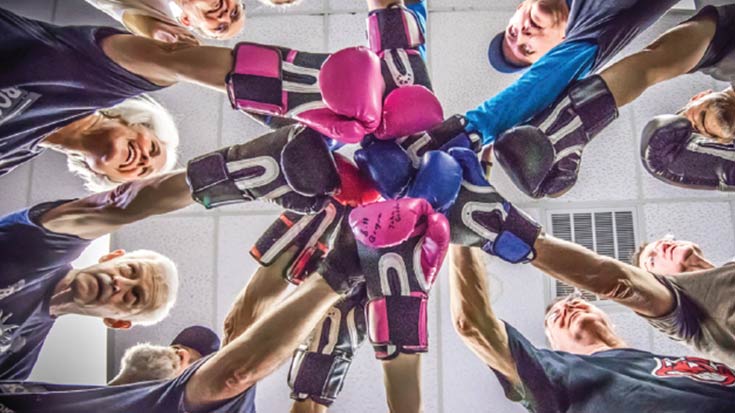 The Medical University of South Carolina Wellness Center is now offering Rock Steady Boxing – a program that gives hope to those with Parkinson’s disease through a non-contact, boxing-based fitness curriculum. The program, which the Wellness Center adopted in August, is open to people with all stages of Parkinson’s. This activity is specifically designed not only to combat the symptoms of the disease but also to offer support through friendships developed with other participants.Janis Newton, director of the MUSC Wellness Center, spoke of Rock Steady Boxing’s early success: “When the program opened in August, many of the participants were doing one-on-one personal training with a disease management trainer, so they had already been doing balance training and working on Parkinson’s symptoms. The participants embraced the Rock Steady Boxing workout, and they love the camaraderie that is built into the program.”

Like many other types of exercise, boxing can ease a range of symptoms. Participants are assessed before they start classes to determine their progression with Parkinson’s disease as well as their physical ability. With careful guidance from instructors, this class tests the agility, balance and hand-eye coordination of the participants. These classes are not just for boxing – they are also designed to improve manual dexterity and voice activation. Some say that grunting or yelling while punching not only can work to improve vocal projection but can also offer an outlet for frustration at the disease and its symptoms.

Rock Steady Boxing is not unique to the Charleston area. People with Parkinson’s disease are participating across the country. The MUSC Wellness Center is equipped with six trained Rock Steady Boxing coaches, and each has completed an intensive training and certification program on understanding Parkinson’s and the benefits of this boxing method. As a member of the Rock Steady Boxing affiliate program, coaches receive ongoing continuing education about the treatment of Parkinson’s disease symptoms through non-contact, forced intense exercise and access to symptom-specific consulting, which addresses individual challenges.

The MUSC Wellness Center is focusing on the importance of getting the word out about Rock Steady Boxing.

“Awareness of this program is important, since it offers another opportunity to fight back,” said Newton. “Our participants leave feeling empowered. They always leave feeling better than when they walked in the building. I think they are surprised at how successful they are at boxing and how much fun it is to exercise with the group. They notice a difference both mentally and physically with an improvement in balance, reaction time and coordination, which is so important to them.”

Newton shared the story of one participant who had lost the ability to write because of symptoms associated with Parkinson’s disease. Because of his physician’s health care plan, which includes Rock Steady Boxing, he is now successful in writing his name. Newton has received many heartfelt words of thanks for offering the class and having so many coaches dedicated to the boxing experience.

Classes at the MUSC Wellness Center are available on Tuesday and Friday mornings and Tuesday and Thursday evenings. Saturday classes will be added soon.