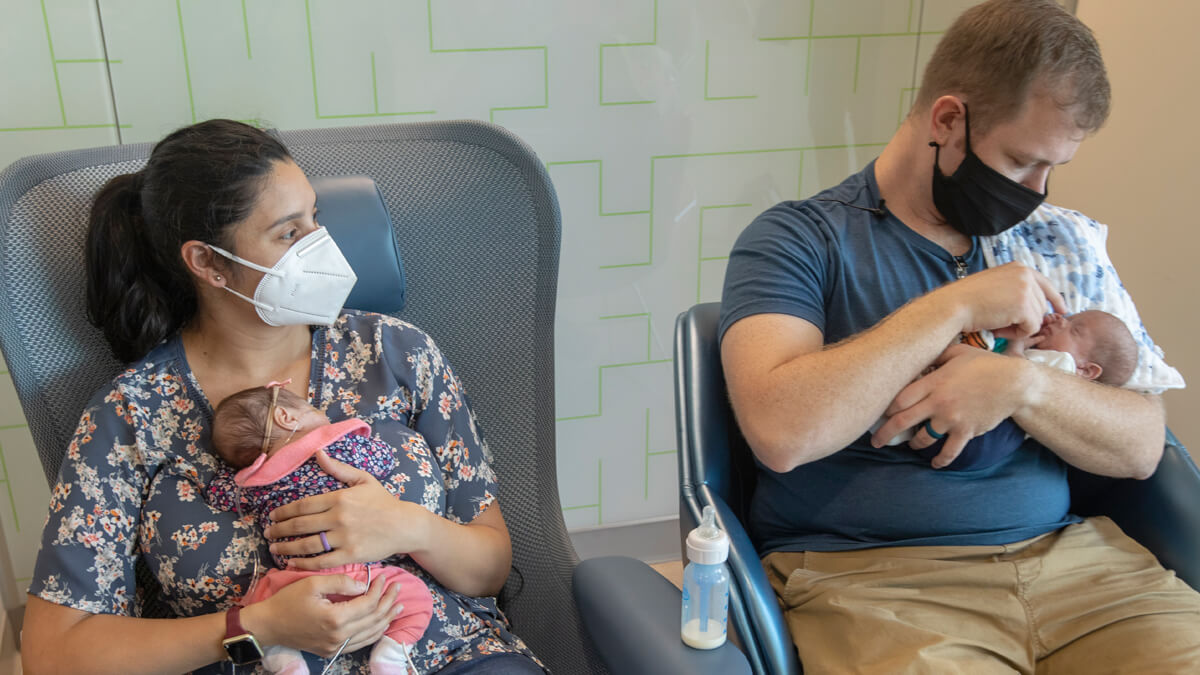 One plus one will almost always equal two, but a very rare exception happened this past summer for Ally and Justin Hampton, who experienced the birth of quadruplets.

And along with their 3½-year-old daughter Payton, the Charleston parents suddenly found themselves with five children, all under the age of 5.

“The quad births were a first for us,” said Sallyann Koontz, director of marketing and communications at the Medical University of South Carolina Children’s and Women’s Health. “And we were thrilled the Hamptons’ babies delivered in our facility.”

“Mrs. Hampton was very healthy before and during her pregnancy, and I saw her for her initial high risk OB appointment at around nine weeks gestation,” said Dr. Rebecca Wineland, whose specialty at MUSC is OB/GYN maternal fetal medicine. “Also, she and her family had an amazing and positive attitude.”

When asked what he thought of being a dad to quadruplets, Justin said, “So many diapers!”

Daughter Payton added that she loves the babies and wants to help with everything except “the gross stuff like diapers or spit up!”

And mom Ally said the levity of having five children has sometimes extended to people they don’t even know.

“We made a family trip to Costco, and several times people gave us some funny looks, like we were on a hidden camera show,” she said.

“I think we’ve normalized the fact that we seriously had four kids at once. We spend a lot of time in the house caring for the babies, so it’s easy to forget how remarkable it is.”

So remarkable that even though quadruplet births are more common than they were 60 years ago, they are still rare. The organization Mothers of Super Twins estimates the odds are 1 in 571,787 pregnancies.

“Higher order multiple gestations are associated with significantly increased risks of maternal and neonatal morbidity compared with twin and singleton gestations,” Dr. Wineland said. “Pre-term delivery is the most common cause of poor outcome in triplet and quadruplet gestations. But each of the babies had their own placentas and amniotic sacs, which likely contributed to the good outcome.”

Of course, there have been other quadruplet births in South Carolina; the Mathias girls, born in Lexington in February 2000, are a notable example.

But the Hampton babies are the first set of quadruplets to be delivered at MUSC’s Shawn Jenkins Children’s Hospital. Their births also came on the heels of the first set of triplets born in the hospital earlier last year.

And, the births occurred just before the Hamptons were to proceed with a military transfer from South Carolina to Washington.

“We were scheduled to move at the beginning of the year,” said Justin, now in his eighth year with the U.S. Air Force and currently serving as a loadmaster. “But we’re still planning on moving. We’re very excited to see a new part of the country.”

And a new approach to parenting. Already, Justin and Ally, and even Payton, are tightening up their running shoes – because if 2021 is any indication, the family’s dynamic may change even faster and more dramatically in ways that none of them ever knew existed before.

“We thought we were as prepared as we could be before the kids got here and figured we had a few months to prepare while the babies were in the neonatal intensive care unit,” Justin said. “But they came home so quickly that it was still a scramble to get things ready. So dialing in our budget has been the biggest adjustment so far. I’m sure there will be more crockpot meals and fewer nights out. More hand-me-downs and fewer shopping sprees. Things may get interesting when they get older and have different activities at the same time. And we may have to get creative to make some things work. But we don’t mind as long as we have five healthy children.”