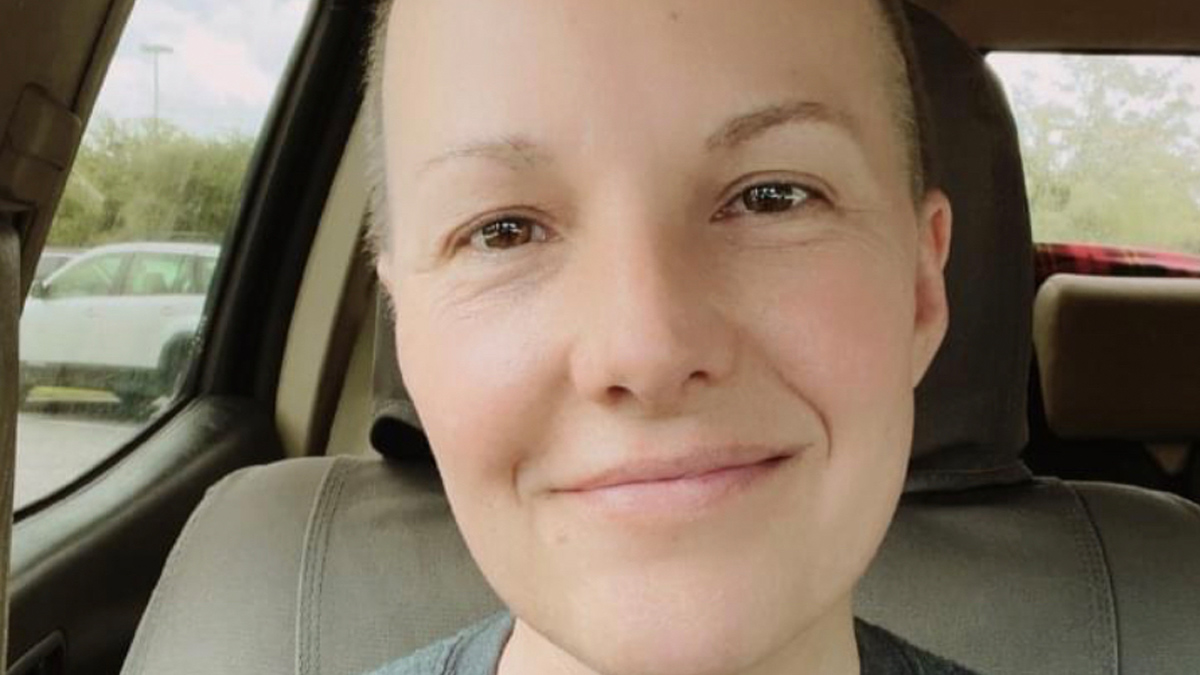 In recognition of Breast Cancer Awareness Month, HealthLinks celebrates South Carolina women who beat breast cancer and are now thriving in their own unique ways. The celebration unfolds in an October series titled Fearless. We believe the unique fortitude and resilience of these women will inspire others who face breast cancer and similar diagnoses. You can learn about other Fearless Women at https://www.charlestonphysicians.com/breastcancer/

When Amy Gesell learned that she had breast cancer, she envisioned herself facing it with positivity, glamour and grace. She pictured herself wearing wigs and scarves like a movie star and accepting her fate with the perfect blend of composure and poise.

“I’m going to handle it this way,” she remembers telling herself. But “the cancer highway is littered with good intentions,” she notes now.

“Oh, I planned on handling everything like Audrey Hepburn, but I ended up feeling like Brad Pitt in the movie ‘Fight Club.’ Pretty wigs? Nope, I was barfing on the couch with a what looked like a hacky sack on my head,” Gesell joked. “It was not pretty. But those ugly beanies were the only comfort as my body temperature constantly vacillated.”

Gesell, 48, learned in January 2021 that she had breast cancer that had reached her lymph nodes but not anywhere else. May 2022 marks the one-year anniversary that her chemotherapy ended.

“Telling people you have cancer and seeing their reaction are two of the hardest parts about dealing with it,” Gesell explained. “I sat alone with the news for eight hours before I could even tell my husband.”

Gesell talks about a time she met her father for lunch and willed herself to sit as still as possible so her chemo hair wouldn’t fall out; she wasn’t ready to share cancer details.

Her father, D. Franklin “Butch” Fritz, was a Green Beret in Vietnam, and he lost his own mother to breast cancer. Stoicism is his default emotion. Mainly because the effects of chemo were so obvious that afternoon, Gesell told father.

“‘You be strong’ he told me, almost crying. ‘And when you get scared, get mad,’” Gesell recalled.

“When you have cancer, people don’t always say the right things because they just don’t know what to say,” Gesell noted. “One thing I learned throughout the process: You have to overlook the specific words and feel the intentions.” (See What to Say 101)

In addition to her go-to doctors – Dr. Gunther Rencken (Walterboro), Dr. Jennifer Beatty (The Breast Place) and Dr. Yanis Bellil (Charleston) – Gesell credits the Charleston and Ehrhardt community of family and friends for lifting her up every time she felt down.

Anyone who knows Gesell wouldn’t be surprised that her first example of that community support is tied to her hair. When it comes to personal attributes, Gesell was all about her hair before cancer.

“My hair was down to my butt,” she explained. “I would highlight it, turn it blond; I just had a lot of fun.”

Gesell would visit the Willow Salon in Charleston every six weeks for hair care and transformations. She became, and remains, close friends with Jade Young Bessent, who now runs Jae Space Salon & Bodega in Riverland Terrace.

She leaned on Jade as chemo treatments progressed.

“Everybody goes through the whole hair thing differently,” Gesell said. “Initially, I imagined putting flowers in my hair to make cancer look as pretty as possible. I asked Jade to cut my hair in stages, eventually as Mia Farrow short as possible. Her cuts were adorable.”

When her hair started to fall out in clumps, Gesell’s intentions gave way to the reality; it was time to shave her head. She did that on her own, at home, in the privacy of her bathroom.

“It’s easier to shave your head than you think,” Gesell quipped. “Years of clipping horses’ hair during the winters has given me a good handle on the finer points of clippers.”

Every person faces cancer differently, especially in the way they push back the fear of its possible return.

“Some people exercise more; others eat less meat. Some people take cancer as a challenge to live like there could be no tomorrow. We all do what we can to protect ourselves from reoccurrence,” Gesell noted.

As a result of knowing people who took all these approaches, Gesell found hers.

“I constantly seek comfort, joy and balance,” she said.

Today, Gesell lives in Ehrhardt, South Carolina, with her husband, Tommy, a professional horseman and an avid hunter. Because of the “deer-dodging” one-hour-and-45-minute commute, she shifted away from her paralegal job in Charleston to become a groom for her husband’s horses.

“I care for horses and bird dogs who have the Taj Mahal of dog care,” she explained.

Relatively new to remission, she confided that longing to be who she was before cancer never goes away.

“I accept who I am and the direction I’m going,” she added. “I’m so glad that I had a feeling of invincibility for as long as I had it. I’m more cautious now.”

“I liked my hair before,” she confided. “But it grew back curly, and it’s really bugging me.”

Throughout her fight against cancer, Amy Gesell discovered that not everyone knew what to say.

“If you haven’t had a terrifying diagnosis, it has to be hard to find the right words,” she explained. “Plus, like many cancer survivors, I’m a very private and self-sufficient person. That makes it even harder to get the words right.”

Gesell learned to focus on people’s intentions more than their actual words of support or condolences. She suggests that friends and love ones make themselves available in earnest ways. Rather than say, “Let me know what I can do for you – because most people don’t like to ask – offer to do a specific task.”

Other words she believes most cancer patients would like to hear:

Since she is a cancer survivor, Gesell found these words to be comforting to others:

How long in remission: This September will be one year.