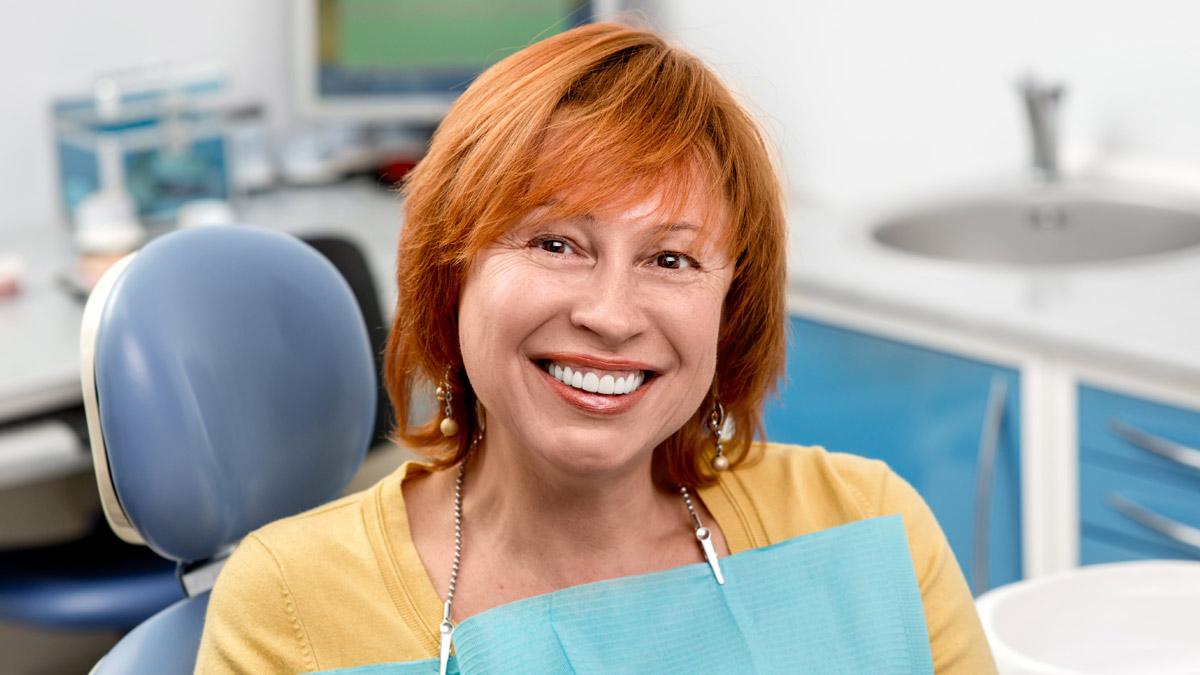 ‘All on 4’ offers a permanent solution for dental patients needing a full prosthetic arch – an entire set of upper or lower teeth.

I blushed with pride upon hearing my new dentist tell me, “You have the gums of a 20-year-old.” The obsessive flossing I’d started 10 years ago, in my late 40s, was paying off. But with his next remark, the self-righteous glow of my rosy cheeks turned a shameful hue of remorseful red.

“However, you have the teeth of a 90-year-old,” he continued.

Although I was acutely aware that my teeth were, shall we say, less-than-pristine, I shuddered at the thought of a glass perched on my bedside table, holding my dentures. Forget about outliving my money. My goal now shifted to outliving my teeth.

Thankfully, a relatively new option exists for anyone who has reached the end of the line with their natural teeth. Bye-bye, dentures. “All on 4” offers a permanent solution for dental patients needing a full prosthetic arch – an entire set of upper or lower teeth. Oral and Maxillofacial Surgery of the Lowcountry has been transforming lives with this procedure for nearly 20 years.

Developed in Sweden during the late 1960s, root form dental implants didn’t become mainstream until the 1990s. The success rate and patient satisfaction remains high, and further development has allowed shorter healing times and even immediate loading in certain situations. One of the more recent ways of utilizing immediate loading of implants is a hybrid type prosthesis or bridge, which is permanently attached to four to six implants nicknamed “All on 4.” It was developed as an efficient and cost-effective way of replacing all the teeth in one or both jaws.

Dr. Matt Dillard explained: “All on 4 or 6 has provided an excellent alternative to dentures for people who have reached the endpoint with their teeth. Since dentures are removable, they do not feel natural, and it’s impossible to generate the same chewing forces as natural teeth. However, with the fixed All on 4 treatment, bite forces can improve up to 300 percent. Implants also help preserve jawbone structure. When teeth are removed, the surrounding bone begins to atrophy or resorb. Longtime denture wearers have often lost more than 50 percent of their original jaw structure, which not only affects their function but also their facial appearance.

The procedure is typically performed under IV sedation and is painless and relatively quick. The initial process takes a few hours, with the surgery first. Once the implants are placed, a temporary bridge is fabricated, attached to the implants and worn until the implants have fully healed in the jawbone. Typically the recovery is easy, with only mild discomfort. Once the implants are ready, the final restoration – custom designed for each patient – is completed by the dentist.

While Dr. Dillard admitted the All on 4 prosthesis is initially “a big expense, in the long run, it’s extremely cost-effective.” The result is a permanent solution that is much less expensive than individual crowns and bridges and easier to maintain – not to mention the self-esteem that comes with a confident smile.