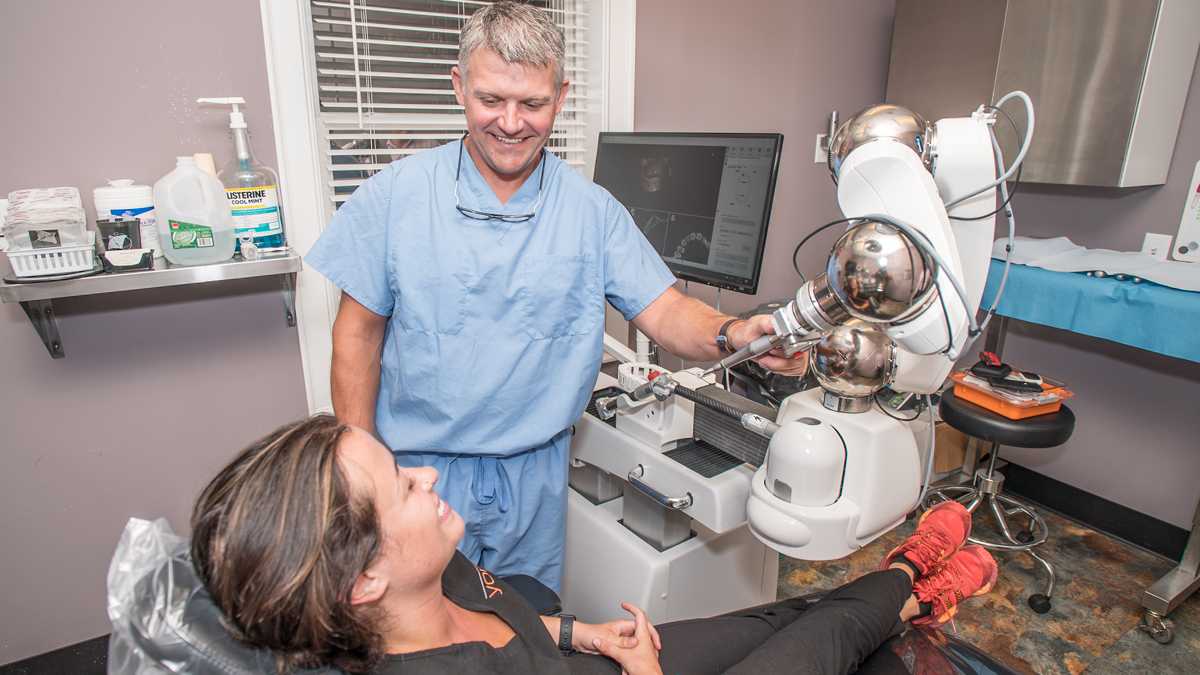 There’s only one reason Dr. Jason Hehr jumped in early on the Yomi, the first robotic surgery tool specifically for dental procedures. Although he considers himself to be an innovator, it’s not the cool new tech that drew him in. It is the “patient experience” – a phrase he repeats multiple times.

Dr. Hehr, a Charleston oral surgeon who’s been in private practice since 2009, knows the pitfalls and the possibilities of being in on the ground floor of new technology.

“Some people are wowed by it,” he explained. “But it’s still in its fetal stages. It is really going to change the game.”

The game right now is dental implants and full mouth reconstruction, two of the procedures the Food and Drug Administration has approved for the Yomi – the latter just gaining final approval in early August.

The Yomi became available in early 2019, and Dr. Hehr got his in late spring of that year. 2020 has been a roller coaster year for health care professionals like Dr. Hehr. The state’s stay-at-home order kept his practice shuttered for six weeks in the spring. Reopening was going strong in late spring when a patient with COVID infected a staff member, and the practice shut down for another two weeks. Now they’re back, but the robot won’t be front and center in many of Dr. Hehr’s procedures until he gets more of his team trained and up to speed.

The biggest use of the Yomi by volume is in placing dental implants.

“The robot exacts precision when placing dental implants,” Dr. Hehr explained. “It changes the game:. Patients, dentists and surgeons all work together to try and make a quality implant restoration that will last the patient a lifetime. The more precise we can be, the better chance that implant and crown have of the longevity we expect.”

The Yomi falls into a category of medical robotics called “assistive guide.” The robot assists but does not take over for the surgeon. Yomi utilizes haptics, a technology that stimulates the senses of touch and motion and can provide sensory cues in a procedure such as a hard-stop when a programmed drilling depth is reached. But haptics also gives the surgeon a great deal of control. Dr. Hehr has had instances where he’s changed the plan on the fly.

“I stop, switch the robot into manual mode and place the implant myself,” he explained.

On occasion, he has changed into hybrid mode, stopped, realigned manually and then using the robot to drill to the desired depth.

The Yomi isn’t the only dental tech in Dr. Hehr’s office; a 3D CT scanner is a critical piece as well. A full digital scan of the patient’s jaw is part of the pre-op planning. The robot reads the scan’s map of bone, nerves and tissue, a key aspect of developing the surgical plan. Because the Yomi knows where the bone is, Dr. Hehr doesn’t need to cut a flap of the gum to reveal the bone. That means faster healing, no guesswork and less discomfort for the patient following the operation. Once the implant is placed, the final scan can be digitally transmitted to the lab and the general practitioner, and, together, they can immediately begin manufacturing the crown.

But, like any tool, the robot isn’t always the right option for the patient. Sometimes, using the robot could make the surgery more complex or take longer.

“A big part of the practice is knowing when to use the technology. For us, it is all about the patient experience,” Dr. Hehr explained.

One area where the Yomi will play a significant role is in full-mouth reconstruction – the procedure just approved by the FDA. Dr. Hehr expects this to be a significant part of his practice. Patients who have had bone loss from medication or disease or who have had dentures for years can’t have conventional implants.

“We can do all the preplanning on the robot. It’s quicker and it’s very precise. We can work with the labs so they’re more prepared. Something that might have taken two hours before can take 30 minutes now,” Dr. Hehr said.

The bottom line, he said, is that “it’s really improving the patient experience. That’s what we’ve learned.”

The Company That Started it All

• Neocis is a health care robotics company focused on the dental surgical market.
• Alon Mozes, the son of an endodontist and a biomedical engineer, conceived the idea for dental surgical robotics in 2009.
• Neocis was founded by Mozes and partner Juan Salcedo in 2012 after they received funding to start on the proof-of-concept path.
• Neocis hired its first employee in 2013 and today has 75 staffers.
• The company completed a successful clinical study of its core technology in 2016, which led to market clearance from the Food and Drug Administration.
• Neocis brought the first Yomi to market. It raised $30 million from institutional investment partners, adding that to $20 million raised in earlier rounds.
• The company is headquartered in Miami.
Sources: Refresh Miami and Boston University.