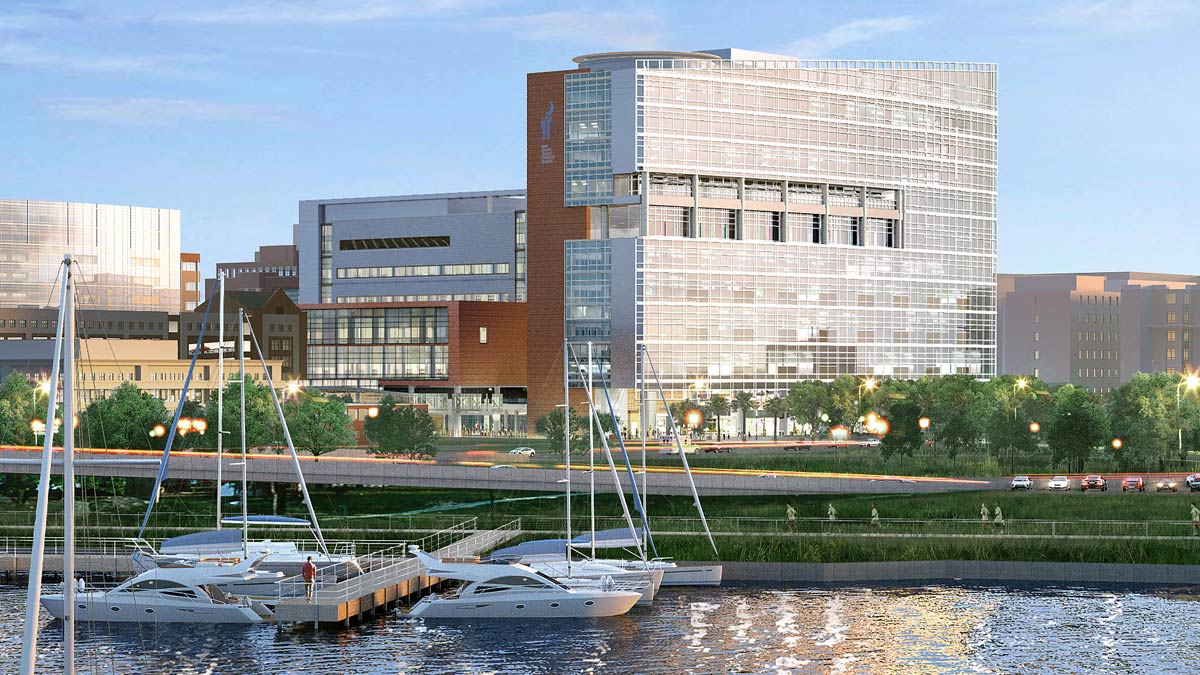 MUSC Children’s Health is less than a year away from officially opening the doors to its state-of-the-art children’s hospital at Calhoun and Courtenay streets in downtown Charleston, a 10-story, 625,000-square-foot facility that promises to provide vital medical services unavailable anywhere else in the Palmetto State. By the time they are operational, probably in October of 2019, the MUSC Shawn Jenkins Children’s Hospital and Pearl Tourville Women’s Pavilion will have cost $400 million to construct, equip and furnish.

Though the building’s lead architect is Perkins+Will, a firm with offices in four continents, the layout of the hospital is based substantially on input from medical professionals, support personnel and family members of patients who have been treated at MUSC Children’s Health – 26 teams, led by a physician and a nurse, that met regularly with the architects for 18 months before the first dirt was turned.

“It’s much more about how we wanted to deliver care and how we wanted to make families feel than it was about square footage and space,” said Mark Scheurer, MD, the hospital’s chief medical officer and the clinical lead for the project. “We were offered the chance of a lifetime to try to design care that would long outlive any of our individual input. It was one huge opportunity, and we had to make some hard decisions.”

One of those difficult decisions concerned the cardiac intensive care unit. Currently, open bays allow doctors and nurses to keep an eye on four or five critically ill babies at the same time.

“We had a discussion early on about having four or so open bays for the most critically ill babies,” Dr. Scheurer explained. “There was a strong feeling from providers that this was the best care model, and we were well down that path when one of the family members wrote a letter saying that ‘she would have given anything to be able to close the door and have 30 minutes alone with her baby.’ There was no more discussion about private rooms.”

“I’m very proud of the way people had open and transparent conversations that focused on patients and families,” Dr. Scheurer added.

John Sion, the hospital’s senior project manager, pointed out that for both safety and efficiency reasons, architects and engineers need input from the professionals who will be working in the building.

“I might look at a floor and put one medication closet in the middle, but maybe we really need two medication rooms because having one nearby might save a life. The entire decision about how this hospital looks and feels is 100-percent led by our clinicians. It’s common to get input, but not so common to get the kind of input we got,” he said.

Sion cited another example of why “guys like me” shouldn’t be designing children’s hospitals. In the beginning, he thought the “stork elevator,” which will be used by women leaving the hospital with their newborns, should be small because it wouldn’t be used all that much. But after discussion about what the elevator might actually be carrying – maybe a car seat, a wheelchair and gift baskets, not to mention a dad and possibly one or two other small children – the architects produced a 3D rendering to make certain the elevator would be large enough.

“We really have to take our lead from the clinicians to make sure we get it right,” Sion noted.

The Shawn Jenkins Children’s Hospital is different in other ways as well. Because the top 35 feet of a building offers the best views – the hospital overlooks the Ashley River – the mechanical equipment for the heating and air conditioning was moved closer to the center of the building rather than on the top floor, which, Sion said, is also a more energy-efficient plan anyway. And instead of putting the cafeteria on the ground floor, which is common in most hospitals, it’s on the seventh floor so parents can be closer to their kids.

The seventh floor also features the 3,200-square-foot Jerry and Anita Zucker Family Atrium, where children and their families can relax, paint, read and play games, and the outdoor play area, which includes a movie screen and a bike-riding area and was made possible by a donation from Boeing.

The hospital, which will be nearly twice the size of MUSC’s current children’s hospital, will have 250 beds and eight pediatric operating rooms. In Labor and Delivery, there will be 29 mother/baby postpartum and five antepartum rooms, as well as seven couplet care rooms where mothers and their newborns will be able to recover together.

On the roof is a helipad that will be able to accommodate large helicopters.

Sion said the hospital’s namesake, the founder of Benefitfocus, did more than just donate $25 million to the project. Jenkins visits the construction site regularly and has held several breakfasts and lunches for the construction workers – by the time the project is finished, more than 4,000 of them will have loaned their talent and expertise to the project. Former and current patients and their families also have shown their appreciation for the people who are building the hospital, at an ice cream social and when they put together a slide show telling their stories, just to remind workers that “what they are doing is special and important,” Sion said.

How important is the MUSC Shawn Jenkins Children’s Hospital?

“A children’s hospital is a community’s hospital,” Dr. Scheurer said. “I hope it will be the cornerstone of service to the community. It’s available when you have a child with complex needs or if your child is otherwise healthy and has an accident or a typical childhood illness. Every community needs that.”

“We are serving more and more kids in the state and in the region, and the level of illnesses we are treating is getting more complex, so we need more comprehensive care teams. The hospital we’re moving out of is not conducive for continued growth in that direction,” Dr. Scheurer added.

Work on the hospital is scheduled for completion by the end of April 2019. Six months later, when all the equipment and furniture is in place, MUSC Shawn Jenkins Children’s Hospital will begin serving the simple and complicated medical needs of youngsters in the Lowcountry and beyond.

Hoping for a better and longer life, young patients with rare birth defects from around the country and across the globe traveled to New York to seek help and inspiration from Dr. Shumyle Alam. But he didn’t hesitate when he saw the chance to leave The Big Apple, move his world-renowned pediatric urology practice to the Charleston area and “get in on the ground floor” at the soon-to-be-completed Shawn Jenkins Children’s Hospital at the Medical University of South Carolina.

“It was an opportunity I couldn’t pass up,” said Dr. Alam, who arrived in the Lowcountry in September 2018. “It’s super exciting to be a part of the new hospital. It’s a privilege.”

Dr. Alam, who also has practiced in Cincinnati, insisted that his nurse come with him, and Lisa Creelman and her husband also relocated to the Charleston area.

“It got to a point where we’d reached our ceiling in New York,” Dr. Alam said. “And New York poses some logistical challenges for families that must travel there from outside the city.”

Dr. Alam treats children with rare birth defects that usually aren’t in the realm of other pediatric urologists – anorectal malformations, for example, where the child is born without an anus, and other abnormalities. In many cases, multiple organs are affected by these conditions.

He explained that the majority of his work is second, third, fourth and fifth opinions and re-operations. Unlike most physicians, his patients rarely are sent to him from other doctors; most of his referrals come from the families of patients he has treated.

Dr. Alam, a native of Kentucky, left New York for coastal South Carolina in part because of the opportunity to help open the new MUSC Shawn Jenkins Children’s Hospital, but he’s also impressed with the work ethic of the people who serve MUSC’s young patients.

“Everyone here is so vested in the care of children,” he said. “People really enjoy what they’re doing. It’s an open, understanding environment.”