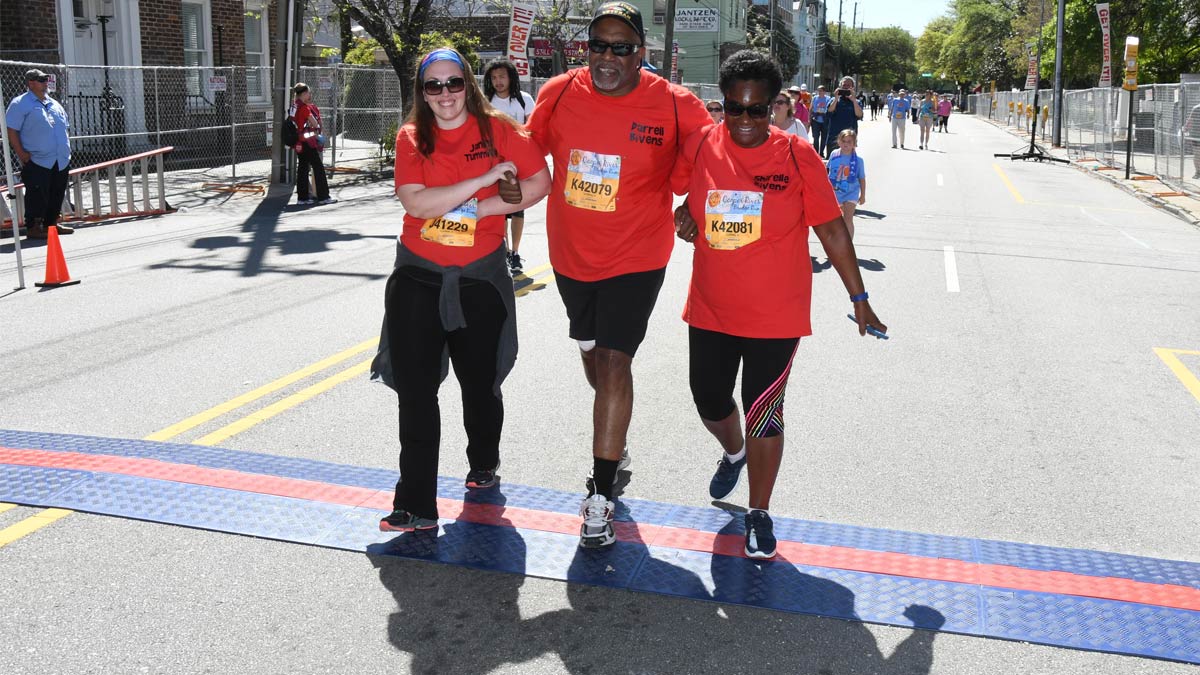 VA Physical Therapist Inspires Amputees to ‘Get Over It’

For Janine Tumminia, a physical therapist at the Ralph H. Johnson VA Medical Center in Charleston, finishing the Cooper River Bridge Run was never as fulfilling as it was when she finished it with her client, Darrell Bivens, in 2017. Though the bridge was actually re-opened before they even finished and Tumminia had to use her GPS to route out the finish line, she said the feeling of completing the race, no matter how much time it took, was one of the greatest accomplishments she has made with a client.

Bivens, an Army veteran, lost his leg due to complications with diabetes in early 2016.

“I thought my life was over when I lost my leg,” he said. “I thought I would never walk again.”

With the help of prosthetics, Bivens was able to walk again and he began physical therapy with Tumminia in August 2016.

“He was joking with me when he mentioned doing the Cooper River Bridge Run. But I took it seriously, much to his dismay at first,” she joked.

His training consisted of help with agility and working out on training machines and treadmills at the VA’s physical therapy center. He said he also walked at home around his neighborhood to get in shape for the race.

“I went from lying in a bed and thinking that I couldn’t do anything at the age of 50 and then a year later walking six miles over a bridge,” he said. “It was incredible. Life wasn’t over by any means. It felt great and gave me hope.”

Tumminia also trained Jerry Nelson, another Army veteran who completed his first Cooper River Bridge Run with her assistance in 2015. He has completed the race every year since and plans to participate in 2018 as well.

“I never even thought to run the race before I lost my leg,” Nelson said. “Janine (Tumminia) gave me the push I needed to believe in myself that I could do it. Now I walk just about every day. She gave me the foundation I needed. She is remarkable.”

Tumminia said, “It’s a tremendous accomplishment to say you finished the Cooper River Bridge Run, which is one of the most popular races in the country. Most able-bodied people can’t do it, so for people who have lost a limb, this is incredible.”

The Cooper River Bridge Run has been a catalyst for these men to continue to live a healthy lifestyle despite their disability, and they both remain active to this day.

Tumminia said she is looking for her next “contestant” to coach in “getting over it” — the Cooper River Bridge Run’s slogan.

“I think I have one guy right now who is interested. I just got to get him to believe in himself that he can do it and remain focused on that goal of finishing,” she said. “I just want people to believe that just because they suffered a devastating injury that their life is not over. You can still be active. It will just be in a different way, but it is not in any way less rewarding. I have done the bridge run. I trained and finished with a good time, but the sentiment and emotions I felt when I finished myself versus when I finish it with my clients is no comparison. I cannot begin to tell you how proud of them I am.”