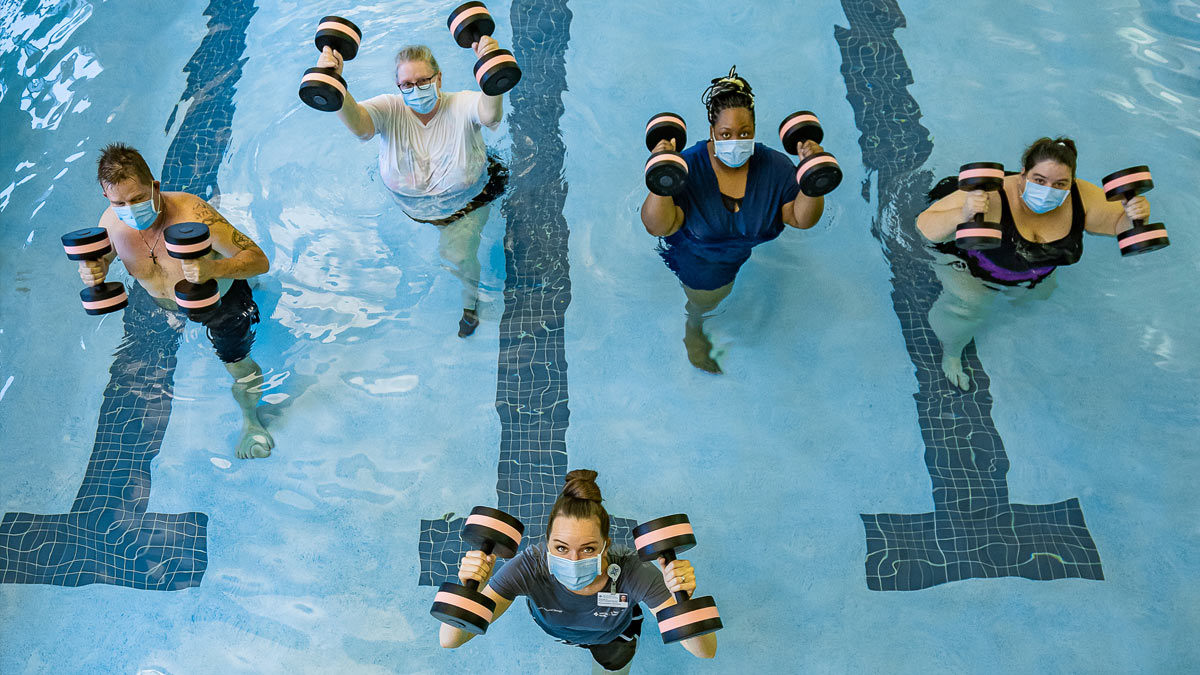 Mobility is a great equalizer. The loss of it can prematurely age and affect the overall health of young people, while retaining it vastly improves the physical and emotional lives of aging seniors.

Aquatic therapy is a key part of an exercise regimen for both ends of that spectrum. It can take many forms, including exercise classes at the local YMCA, athletes soaking in ice baths and running on underwater treadmills, immersion tanks and more.

For David Pattison, wellness director at Summit Hills, a continuing care community in Spartanburg, it’s an alternative for seniors who can’t – or won’t – exercise on land to gain or retain mobility and the confidence it brings.

Tracy Strickland, a fitness coach who works with clients at the North Charleston Aquatic Center, sees an opportunity to find new and fun ways to engage “active agers.” While for Travis Dewyea, manager of outpatient orthopedics at Spartanburg Regional, it’s aiding recovery by building strength in the pool that can transition back to the land.

Still, few have the same intimate relationship with water as Charleston’s Kathleen Wilson.

A world-renowned marathon swimmer who swam the English Channel, circumnavigated the Charleston peninsula in record time and was inducted into the South Carolina Athletic Hall of Fame, Wilson is also the resident swim professional at the MUSC Wellness Center. Her interest in aquatic therapy comes, in part, from her own recovery from “massive tears in both rotator cuffs.” Following surgery, she took her rehab to the water.

“I took everything I was doing on land and transferred it to the water. It was so much easier, and my recovery was faster,” she said.

Wilson attained certification and is currently leading a once-a-week arthritis class at the Wellness Center, but that’s just a toe in the water.

“My hope would be to see aquatic physical therapy and rehab become much more mainstream. Let’s use the water to its potential,” she said.

At Summit Hills, the part-saltwater pool is kept at a balmy 93 degrees, which Pattison said “loosens up the muscles so you can do more than you can on land.” The salt water also adds buoyancy so “people who can’t walk on land feel more weightless in the water, and it’s easier to do more difficult leg movements.”

For many seniors, the fear of falling is self-fulfilling, preventing them from essential exercise that will strengthen their core and improve their stability.

“Working in the pool alleviates the fall risk,” Pattison explained. “A lot of exercising is a confidence thing. Most seniors are afraid to fall so they hold back. The pool builds their confidence.”

Aquatic therapy is not only accepted therapy for orthopedic surgery rehab but also an important element for patients with neurological disorders such as Parkinson’s disease, autism, depression or stroke. Studies supported by the National Institutes of Health have shown that aquatic therapy significantly improves balance and functional mobility for stroke patients – either alone or in conjunction with traditional land-based therapies.

According to Pattison, some promising studies suggest that exercising muscles atrophied by stroke can even “stimulate reconnections” with a patient’s neurological systems.

A typical senior class with Strickland is both fun and a real workout. She ticks off a list of goals: building endurance, pushing your heart rate, strengthening core muscles to improve stability, increasing range of motion. Jumping jacks, cross country movements and rocking exercises are designed to push you to a “working” heart rate – then come core movements using noodle floats, hand weights and the wall for tricep dips.

Strickland, who found aquatics when she was pregnant and suffering severe sciatica, disputes the stereotype that aquatic fitness is only for seniors.

“You can simulate all the modalities of a boot camp in the water,” she pointed out, explaining that tire drills, battle ropes, even hurdles, can all be done in the water.

Spartanburg Regional works in partnership with the Thomas C. Hannah YMCA where there’s 15,000 square feet of rehab space, including a pool that includes an integrated bench and a separate channel with a resistant water current so patients can walk with the current to help their mobility or against it to improve their strength.

Dewyea described the average aquatic therapy patient as “struggling with knee and back pain and who isn’t comfortable exercising.” The general goal of the aquatics, he explained, is to “build them up to the point where they are tolerating more exercise” and then “transition them from the pool to land-based therapy.”

Once in the pool, therapists such as Honshell take over. She talked about the hydrostatic pressure of the water improving circulation and the buoyancy of the water enabling balance, but her real passion is the people. She described her work as “helping them take ownership of their own health” and spoke excitedly about seeing “the light bulb go off” when they realize: “I can do this.”

“It’s a gentle introduction to exercising and gives people confidence to keep going,” she said.

So even for those who started out rehabbing from a knee replacement or back injury, “they realize it’s attainable for me to make small changes that eventually can lead to bigger changes.”

As these advocates for aquatics achieve ongoing successes and aquatic therapy gains ground with patients, it will face a potentially limiting problem: access.

“In Charleston, we’re starved for pool space,” Wilson said, noting that she doesn’t see any push for health care or fitness facilities to add pools. “They are financial drains. It’s hard to make a pool run in the black,” she conceded.

But the “payback” is worth it, she added.

Running in the Pool vs. Land

Aquatic fitness is not just for seniors. There are a lot of things you can do in the water. Veterans, for example, regain balance and strength navigating an aquatic obstacle course. Some pools have underwater hurdles, bicycles and even treadmills. In fact, running in the pool is a stronger conditioning workout than on land. Here’s why:

1. The water reduces the weight you are carrying by at least 50% and up to 90%. So if you’re a 150-pound runner, you are only carrying 15 pounds of that in the water – less weight, less stress, fewer injuries.

2. The force of your foot striking the ground and stressing your muscles and ligaments is reduced. That increases your stamina so you can run longer.

3. You are pushing against the force of the water, thus strengthening muscles you are not using when you jog on land. It’s a more complete full-body workout, adding to your core strength.

5. Water’s additional resistance means you’re working harder with less injury risk and fatigue. So you can go longer and gain more – or lose more. Some studies have found that a minute jogging in the pool burns three more calories than jogging on land. You do the math.