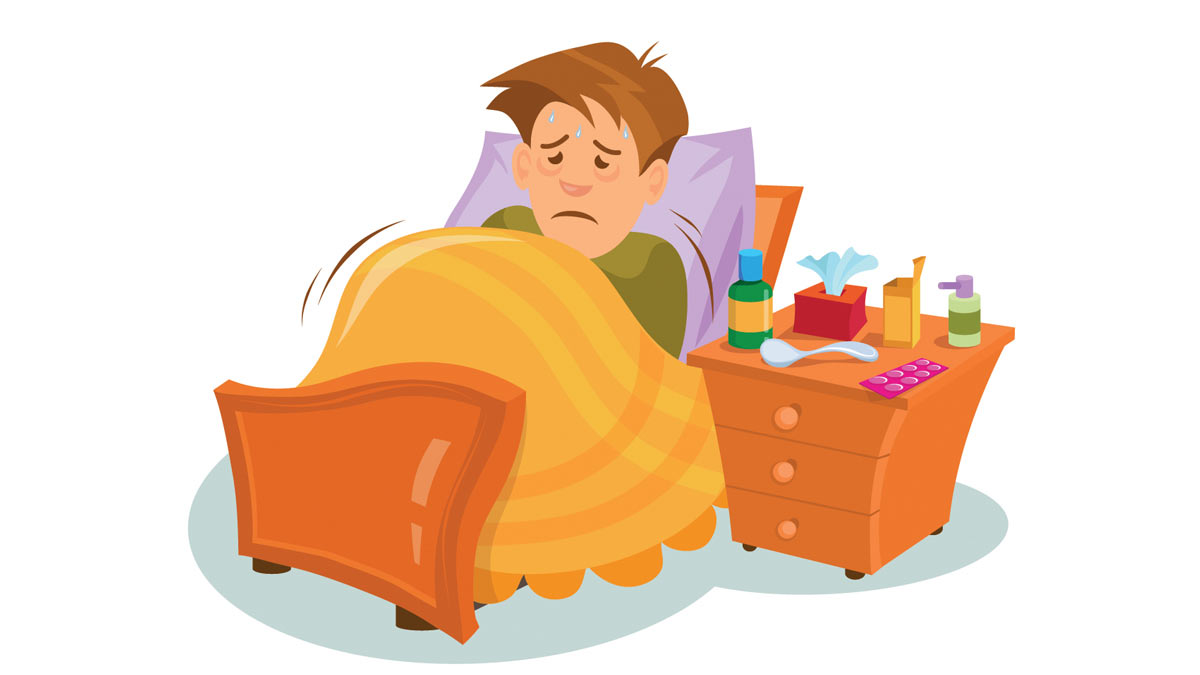 There’s a chill in the air and a chill in your bones. As you get cozy on the couch under a blanket, bring the tissues. You’re going to need them. It’s that time of year again – cold and flu season.
Are you determined not to catch those pesky viruses this year? The ones your co-worker likes to spread around the office each winter? Or the ones your children bring home from school? We talked with Dr. Robert T. Ball Jr. MD, MPH, FACP, adjunct professor of infectious diseases and public health at MUSC, to find out how you can stay healthy during this very sick time of year.

HealthLinks: What can you tell us about the strain of the flu this season? Any predictions on that?
Dr. Ball: “Influenza viruses circulate among people globally 24/7/365, just more in colder (indoor) months, hence the misuse of the term ‘season.’ The top four major strains amongst us are 2 type A and 2 type B, which are again in this year’s vaccines. Influenza viruses mutate constantly, even during any given year, which is why predicting (from Southern Hemisphere strains) what will happen later in the Northern Hemisphere (to develop three- or four-strain vaccines about five months in advance) sometimes results in subsequent suboptimal vaccine efficacy in the United States and Europe.”

HealthLinks: What are some ways that people can be proactive with remaining healthy this season? Is the flu shot the way to go? Any other tips?
Dr. Ball: “Standard public health recommendations for years are that people over 6 months old should routinely get the influenza vaccination annually, usually around the beginning of October. Duration of protection averages about six months (or longer after repeated annual vaccinations). Repeat immunizations in the spring/summer are not standardly recommended but may be requested or advised by some specialists. Further, folks with any type of ‘seasonal’ head cold symptoms (upper respiratory infection) should not go to work or school from the onset of symptoms for about three days. Additionally, ‘cough/cold etiquette’ is a must (coughing or sneezing into your elbow or handy tissue, not into your hand). Also advised is frequent soap and running water hand washing (plan B is frequent use of hand sanitizers). Hugging is OK, but shaking hands potentially contaminated with viruses should be replaced by the ‘fist/elbow bump’ during flu season.”

HealthLinks: If you think you have it, what should you do? See a doctor? Get Tamiflu?
Dr. Ball: “Influenza symptoms vary widely, from minimal to severe. Onset is subtle, often like a common cold, but may rapidly progress to systemic (total body) with cough, fever, headache, body aches and even intestinal symptoms (nausea, vomiting, etc.). Primary influenza pneumonia usually occurs within the first week, but secondary (bacterial) pneumonia onset may also occur (later or overlap in time). These and other complications often result in hospitalization (especially in children, pregnant women, immunocompromised patients and the elderly, which is why these groups are particularly in need of vaccination). Death may occur within the first or second weeks, and the CDC reported at least 36,000 U.S. deaths for the 2017-2018 season (with about 40 million influenza illnesses, 20 million medical visits and 600,000 hospitalizations).”

HealthLinks: How does Tamiflu help? Any other medications that can help once you have it? Or do you just treat the symptoms?
Dr. Ball: “FDA-approved anti-influenza-specific medications (now four) should be prescribed to patients whenever influenza-like symptoms first appear, regardless of an official office visit or any presumptive testing (much less waiting on test results). Even phoning-in (per an office protocol) Tamiflu 75mg treatment (twice daily for five to seven days) in lieu of exposing other patients in your waiting room is acceptable. The old theory of ‘only within the first two days of symptom onset’ has been replaced with ‘as early as possible, but no cutoff.’ These specific influenza-virus-killer meds have been shown to reduce the severity and duration of patient symptoms, the chance of passing the virus to others and, more importantly, the likelihood of complications such as hospitalization, pneumonia and even death. There are minimal side effects of these meds. These antiviral meds should also be prescribed once daily for five to seven days for all direct/household contacts as post-exposure prophylaxis (per CDC recommendations). Also, many over-the-counter meds may help reduce symptoms such as cough, body aches, GI symptoms, etc.”

HealthLinks: How long should you avoid others if you have the flu? What can you do if you live with someone else to avoid passing it on?
Dr. Ball: “Folks with influenza are contagious from one to two days prior to the onset of symptoms to three to five days post-onset, although population variability accounts for contagiousness for up to about 10 days. Few patients ever get an ‘official diagnosis,’ as many influenza symptoms mimic other winter viral illnesses, and most office visitors seldom get testing (but should get presumptive treatment).”