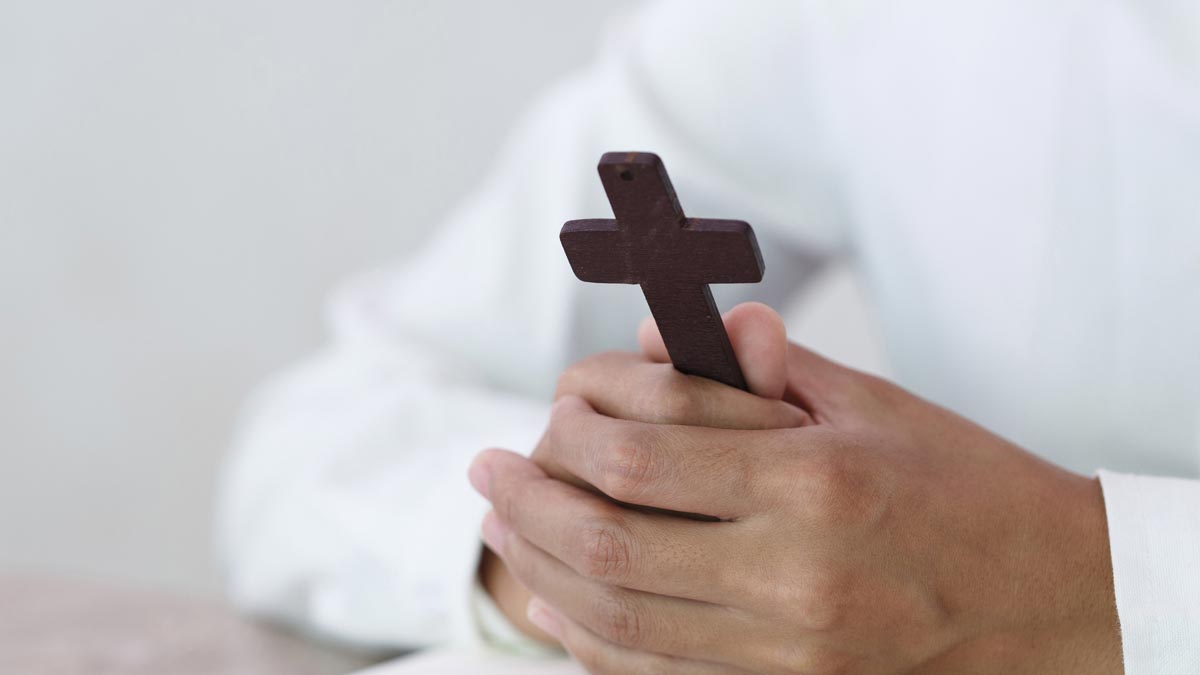 No two days are alike for the Rev. JohnBosco Ikemeh. From the minute he arrives at the Medical University of South Carolina in the early morning until the day is done, he’s running from task to task, filling in wherever he’s needed. Whether he’s celebrating mass, blessing the hands of the medical staff, being with families, taking confessions or giving the dying their last rites, Ikemeh feels his role is to provide calm for those in crisis and hope when there is fear.

“I want to be a symbol that God is present when people feel like they need his guidance and hope the most,” said Ikemeh.

And although MUSC is undoubtedly lucky to have him, Ikemeh never planned to be a hospital chaplain. In fact, he never planned to be a priest. Still, it’s the path that he feels God has laid out for him, and he said he’s blessed to fill this ever-important need within the medical community.

Born in Port Harcourt in Southern Nigeria in the midst of a civil war, Ikemeh was one of 10 children. Though his family had been comfortable before the war broke out, once his city was blockaded, their luck dried up. They barely had enough to eat, let alone go to school. By middle school, his parents wanted him to learn a trade so he could help support their large family, but instead he was encouraged and then supported by a visiting pastor – the Rev. Kevin Ikpah – to attend school. He later graduated from the University of Ibadan in Nigeria and obtained a graduate degree in systematic theology from the Jesuit School of Theology in Berkeley, California. He made his way to Charleston in 2005 to be the Catholic priest at Joint Base Charleston, where he served until 2011 before coming onboard at MUSC.

It’s been a long journey, but each day is an adventure for Ikemeh. If patients are in need of sacraments, he’s there. If the medical staff needs a boost, he can do that, too. He tries to be a shining light of support. Whatever the calling, he’s happy to serve.

Like Ikemeh, the Rev. Jonathan Duncan also wears many hats as director of spiritual care at Bon Secours St. Francis in Greenville. He’s a chaplain who also oversees the work of the other chaplains. Having grown up in Arkansas, he attended Sewanee: The University of The South and served at churches in Texas before making his way to Greenville and becoming an ordained Catholic priest. But of all the roles he fills, some of his most important work is in the morning when his team of chaplains gets together to pray and read.

“It’s a time to set prayer intentions and to pray for those in need,” said Duncan.

Inside the hospital chapel is a place where patients, visitors and medical staff can write down particular prayer intentions, and, when the chaplains come together in the morning, it’s a time to meet those specific needs. He balances the more ordinary tasks of checking emails and running events with his spiritual role as a support system for the sick and dying.

During the COVID-19 pandemic, that role became even more crucial to ailing patients and a sometimes frightened medical staff. He didn’t want any COVID patients to die alone, even if that meant putting his own life at risk. Donning a hazmat suit, he ventured into the rooms of the sickest patients to support them when they were at their most vulnerable.

One of Duncan’s most memorable COVID encounters was with Kyan Barnes, a young mom who grew so sick from the virus that she was forced to deliver her tiny baby prematurely at 33 weeks so doctors could attempt to save her life using more aggressive means in the intensive care unit. When Barnes feared she might die, she vowed she would see her new baby again. That’s when Duncan suited up so that he and Barnes could participate in virtual visits with baby Zoey.

To this day, Barnes credits those visits with giving her the motivation to fight for her life. Each day she worked hard to breathe on her own because she wanted to be there for her baby. Thankfully, both mom and baby now are doing just fine.

For Duncan, it was just another day on the job. “It’s just what you do; it’s why you’re here,” he said.

THE REV. JOHNBOSCO IKEMEH’S PURPOSE AND DEVOTION TO NIGERIA

A few years ago, the Rev. JohnBosco Ikemeh was visiting Abakaliki, a poor city in Southeastern Nigeria. He was taken by all of the children “hawking” or selling items on the street rather than attending school. Families in the area live on just $3 a day and cannot afford to send their children to school. It brought him back to his younger days when his parents also couldn’t afford his education. If not for the generosity of a visiting pastor, the Rev. Kevin Ikpah, who invited him to live in the church with other children and attend school, he, too, would have been hawking just to make ends meet. That’s when Ikemeh decided to build a school in the area for children to attend free of charge – and that’s just what he did.

“We spend about $2,000 a year to keep a student in school, including room and board, tuition, books and school wears,” said Ikemeh. “We want to break the circle of poverty by giving these children some education that will enable them to compete in our world.”

The land was acquired, construction is underway and a bridge to the school has been built. But there’s still much more to be done, and you can help.

Tax-free donations can be made at www.africaneducationoutreach.org; [email protected]; or write a check payable to African Education Outreach, P.O. Box 1066, Ladson, South Carolina 29456.