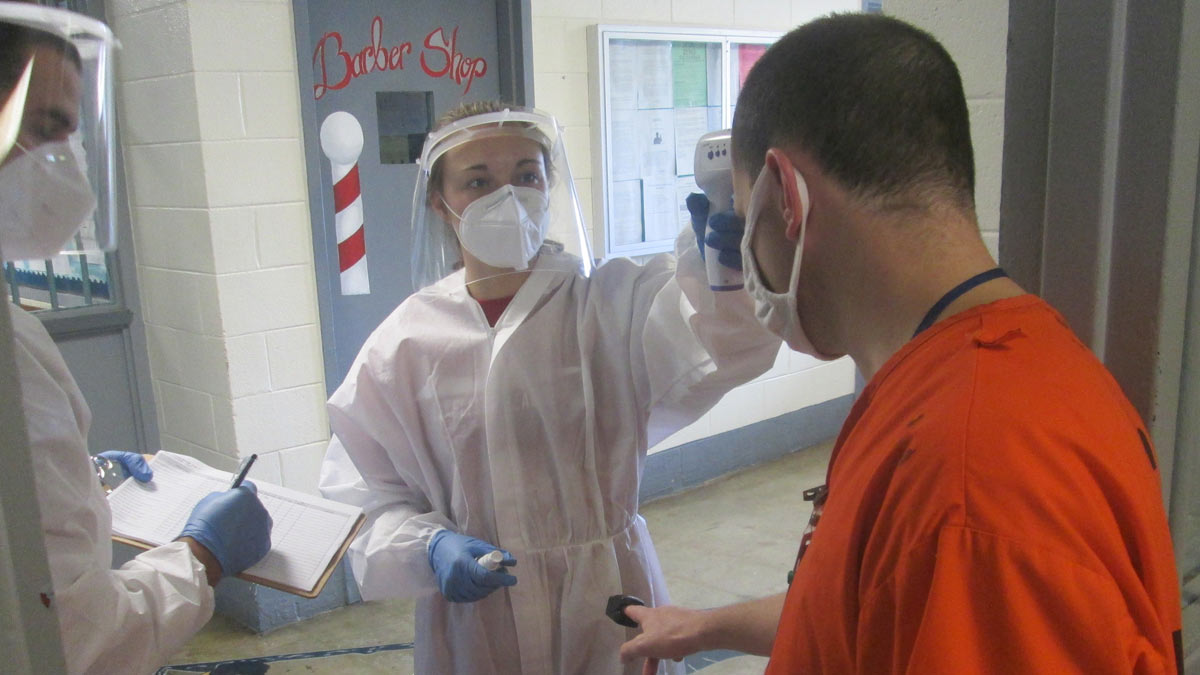 Have you ever wondered how prisoners in South Carolina receive health care? For most of us, it’s not something we’ve considered. For the 17,000 inmates and thousands of people employed by the South Carolina prison system, the focus on health care came crashing to the forefront of their consciousness earlier this year as it became clear that a pandemic was on the horizon.

“We started thinking about the coronavirus in mid-January,” said April Clarke, M.D., who serves as the chief medical officer for the South Carolina Department of Corrections. “I remember when the director came in and started planting the seeds so we could start wrapping our heads around it. A lot of the early preparation set the stage for us.”

The early strategies set in place by the dedicated team at the SCDOC worked. It was two months before anyone in the 21 South Carolina prisons returned a positive test for COVID-19.

“We were one of the first states to shut down visitation and volunteers,” said SCDOC Director Bryan Stirling. “It’s tough. Everybody wants to see their family members and their loved ones. So we gave out free phone calls a couple times a week, and we’re looking at some other ways to use technology to try to connect them with their families.”

The reason for the move to completely eliminate outside visitors was partly due to how visitation works in South Carolina. In movies, inmates sit behind a plexiglass divider, talking to their loved ones on a telephone. In reality – at least in South Carolina – it’s different. Inmates are able to hug and connect with those they love.

“That’s the way it’s always been. And we want to keep that bond, that support system, so that, hopefully, it will be there when they get out,” Stirling said.

Although the precautions set in place by the team were effective, they knew a positive test was inevitable.

“Because of the nature of the virus, meaning there are so many people that can be asymptomatic carriers, we knew it was only matter of time before coronavirus entered our facilities,” said Dr. Clarke.

So what happens when an inmate tests positive for coronavirus?

“Once we have identified someone as coronavirus positive, we isolate them from their home housing environment and that unit or dorm goes on quarantine. Everyone in that dorm has to stay inside that dorm. Temperature, blood pressure, oxygen saturation and vital signs are monitored as well as symptom checks twice a day,” said Dr. Clarke. “We do that for 14 days to try to identify any other individuals who are positive. If we have more positive individuals, that 14 days resets, but eventually what happens is we get to that last person that possibly has it. And then we count from that 14 days and the quarantine time period is lifted. Then it’s back to normalcy.”

As of August 2020, an estimated 3% of the prison population had contracted the virus.

“One of the things we’re finding interesting is, if we secure people in their cell, the virus seems to move around in a dorm. The air conditioning system must have some kind of impact on that because it can jump around. We know these folks have not had contact with each other. There are a couple dorms we just can’t get clear, and that’s one of our theories,” said Stirling.

There is so much we still don’t know about coronavirus, and the challenge of containing a pandemic in the outside world has been magnified in the correctional setting. When you add in the already difficult job of providing health care to 17,000 inmates, many with substance abuse and mental health issues, it speaks to the dedication and power of the volunteers and employees serving in the Department of Corrections.

Layer in the fact that 85% of inmates are back in the community within five years, and you can see how the focus on quality care is an important but often misunderstood and ignored contributor to the health of society as a whole.

Mental health and substance abuse also are priorities for those working to improve health care in the South Carolina prison system.

“If you asked me what is the most important component to prison health care, I would definitely say it’s mental health,” said Edward O’Bryan M.D., executive director of MUSC Health Solutions. “People who are incarcerated have a higher percentage of mental health problems, and they can be very serious. Schizophrenia, bipolar, all the way down to the fact that being in prison itself can cause mental issues like depression and anxiety. You’ve got to make sure people are healthy. These are citizens of our state and our country, just like we are.”

Concerning substance abuse, there is a growing consensus that incarcerating people does more harm than good, especially when you factor in collateral damage such as the devastation of breaking up families for low level offenses like marijuana possession.

“Many people do get on substances and commit criminal acts. I don’t think that’s necessarily excused. However, I do think it’s possible to treat substance abuse differently,” said Dr. O’Bryan.

The war on drugs of the 1980s and 1990s has contributed to much of the way punitive measures are approached today, but that is shifting as well.

“It was lock them up and throw away the key, and that led to an increase in prison population. We are seeing the reversal of that now, with a lot of folks trying to help people divert from prison to drug courts, veterans court and mental health courts,” said Stirling. “But, also, when they did away with state-run mental health institutions, there was not a place for people that had severe mental health issues to get proper treatment, to be stabilized and go on about their lives. So where do they end up? Well, they end up in prison.”

“Prisons, detention centers and jails are the largest mental health providers in the country, and that’s not the way it should be,” he added.

Providing health care to inmates is by no means an easy job. Speaking with Drs. Clarke and O’Bryan, and Stirling shows how much those working in the prison system care about making an impact on inmates’ lives.

“I would like to ask for health care professionals to look at working at the Department of Corrections. It’s an underserved population and is vitally important. We need help. We need mental health professionals; we need medical professionals; nursing is big. If you went into this business with the idea of helping people, I can’t think of a better place to really make an impact, not only in the Department of Corrections but in your community,” Stirling said. “You can really turn someone’s life around.”

Across the country, 67% of men released from prison are re-arrested within three years. The Turning Leaf Project works daily to lower this appalling rate of recidivism.

Located in North Charleston and started in 2014 by Amy Barch, the Turning Leaf Project is a nonprofit organization with two main focuses: keeping men out of prison and running a successful screen-printing business. The two go hand-in-hand. Men enrolled in Turning Leaf engage in intensive group therapy sessions each morning which follow a proprietary curriculum of cognitive-based therapy. They work in the screen-printing shop each afternoon. Together, the 150 hours of therapy plus real-time work experience, along with job placement services that ensure graduates permanent full-time employment with a livable wage, are working. Turning Leaf students stay out of prison upon their release, and 80% of graduates are never re-arrested.

It costs roughly $10,000 to put a student through Turning Leaf, which can sound daunting. However, said Barch, “No matter which way you look at it, investing in people returning home from prison is the right thing to do. Keeping people out of prison saves money, makes our communities safer and transforms lives and families.”

After all, it costs taxpayers upwards of $31,000 per year per prisoner in the U.S. prison system. Turning Leaf saves taxpayer dollars.

Students come to Turning Leaf from a variety of avenues. Some are contacted by an outreach coordinator and others apply for the program while staying in area halfway houses. Almost all have a history of violence to shed. In some cases, the men hired by Turning Leaf have never known a life off the streets. Their parents sold drugs, as did their grandparents, aunts and uncles. For most, Turning Leaf can break the generational chains of reliance on drug sales and violence.

The program fills in gaps left by traditional re-entry systems.

“Unfortunately,” said Barch, “when most men are released from prison, we’re relying on an old charity model of re-entry that just isn’t working. Providing bus passes, clothing and food does nothing to impact a person’s ability to stay out of prison. It’s time we developed a more sophisticated model of re-entry that invests in transformational change. Turning Leaf is pioneering this new type of re-entry organization.”

Barch said she hopes to open a Turning Leaf branch in the Upstate. For more information on Turning Leaf, its students and how you can buy a shirt that helps keep men out of prison, visit www.turningleafproject.com.