Most young people sigh sentimentally when they see an elderly couple walking hand-in-hand. Just don’t ask them to envision anything more overt between people old enough to be their parents or grandparents.

But the truth is, love, romance and even sex can (and should be) still very much a part of later life. There is a love life for seniors – just don’t call them seniors, said Dr. Dorree Lynn, a psychotherapist and relationship expert.

“Senior is not a word I use,” Dr. Lynn said. “I’m an advocate for pro-aging and the issue around seniors is nobody knows what a senior is. We need to reframe aging and continue to find different words that mean different ages. I tend to use the word sage or elder.”

Whatever you call them, they’re still looking for love if they’re alone, she said.

“A Northern metropolitan woman might say, ‘I want a friend with benefits,’ or ‘I just want a nice relationship,'” she said. “In the South, marriage tends to be the more acceptable option. The statistics show that if people have had a good marriage, that’s what they look for again. If they’ve had a rough time, they’re generally afraid to date altogether for a while and afraid of marriage.”

Still, older folks might hesitate to put themselves out there for fear that they are too old. They compare themselves to what they used to look like when they first started to date, and the reflection in the mirror might give them pause.

“Everyone has aged and everyone thinks no one else has aged,” Dr. Lynn said. “They think, ‘I’ve put on a few extra pounds or extra wrinkles, and who’s going to want me?’ I think fear keeps people from dating.”

Dr. Lynn said that even when someone gets over fear that they are too old, a big hurdle for people later in life is figuring out how to meet someone. Many are uncomfortable with online dating and hope that they will meet someone at church or synagogue, or that a friend will introduce them to someone. Too passive, she said.

“Dating smart is an education,” Dr. Lynn said. “How does one learn to pick out the good fish. How do you learn what you want and still keep an open enough mind so that you might expect the unexpected. People who are looking to start dating again don’t think of themselves as a commodity. I say dating is like shopping, except you have the control. Of course, it’s also scary. It’s like shopping with your heart on your sleeve.”

And that shopping trip can often include sex, although Dr. Lynn said we could use sex education for the older population.

“There is no three-date rule at this age that you have to sleep with somebody or not sleep with somebody,” she said. “We need as much sexual education for this population as we need for young people. Because it’s a myth that people are no longer interested in sex.”

She said that the sex is different at this age.

“Look, you’re not going to have 16 orgasms a night. Nobody is still a bunny bouncing around. Unfortunately, women and men have this image that they are not sexual because sex is not the same,” Dr. Lynn said. “The truth is, the last time I looked, sex has no expiration like it’s on a milk bottle. Sex is something that, as long as people are healthy, they can have until the end of their life.”

That difference can actually make for a better sex life than people had when they were younger, she said.

“Sex can actually be better because everything has slowed down and people slow down, so they can take their time and learn how to touch and caress,” she said. “If one slows down, one starts to feel. And many people in mid-life or older have forgotten how to feel because they’ve been too busy. The nice thing about being older is you can learn a whole new way to be in connection, including a lot more touch. When sex is motivated strictly by hormones, as it often is when we are young, you don’t have to bother thinking about anything. As you get older, you do have to think.”

And, despite the stereotype, men as well as women are looking for meaningful connection, she said, although men may seem to recover more quickly from the loss of a partner.

“The old adage says – and I believe it holds true – that men replace and women mourn. Women carry the dreams of what our past relationships were and weren’t. Men can blot out things much faster. Women are more complex,” Dr. Lynn said.

And, she said women don’t need to compete with lovely, firm 20-somethings, despite messages from our youth-oriented society.

“Women and men – maybe more so women – forget that they are a find, that they are worthwhile. They really do think that because of our very youth-oriented society, they have no value and that no one is going to want them. Women forget that men at this age have man boobs and pot bellies and that maybe what they want at this age is not what they used to have. Maybe they are ready for a different kind of person.”

Dr. Lynn said the most important thing to remember is that love, desire and intimacy are possible at any age, but that they have to be sought.

“Fear is a factor, but you have to remember that everyone is a spotted pony – no one is perfect,” Dr. Lynn said. “If they sit at home and do nothing, Mr. or Mrs. Charming is not going to be knocking at their door.” 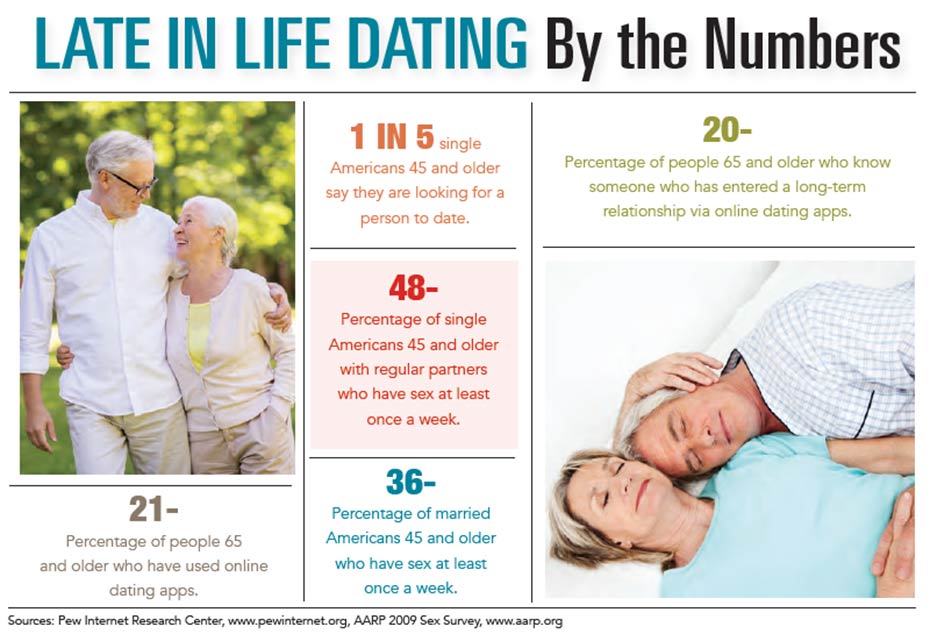