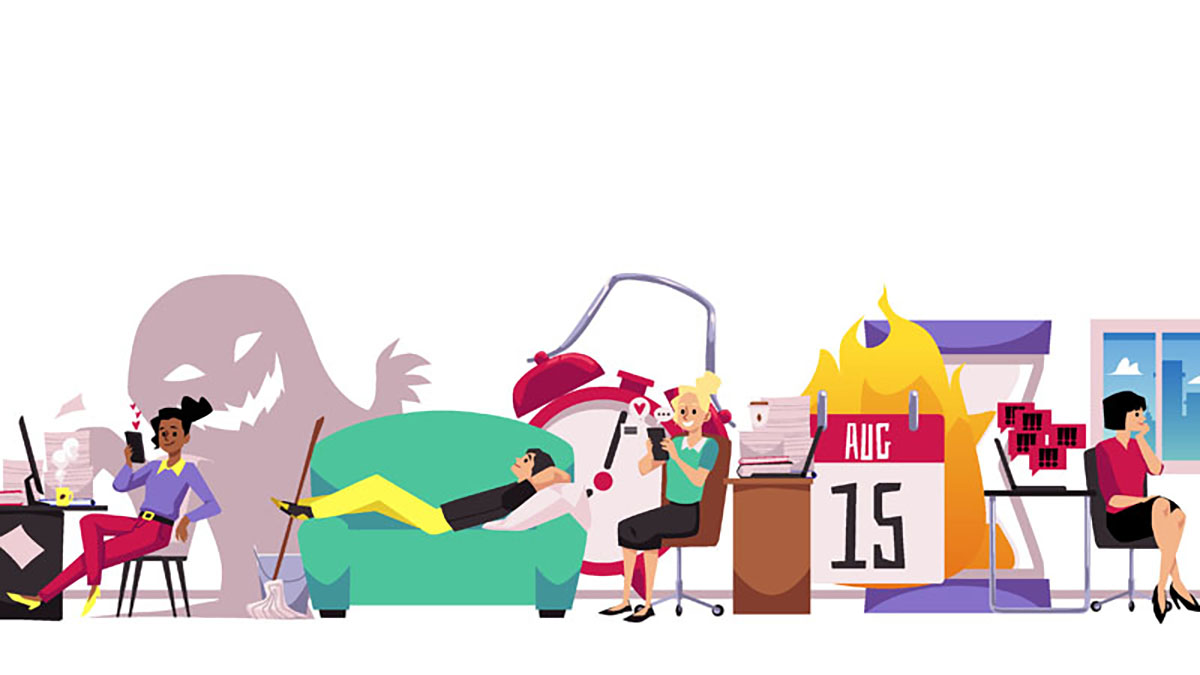 “Procrastination is like a credit card: It’s a lot of fun until you get the bill,” English actor Christopher Parker once said.

Most procrastinators, and the family and friends who surround them, would probably agree. Deep down, people know that postponing work is a bad plan and often hazardous to good results; yet they do it. That short emotional lift that comes with putting off a project is rewarding and deceives procrastinators into believing they have everything under control – that is, until nagging guilt, increased anxiety or a boss snaps them back to reality. The project still remains.

So why do people knowingly – and repeatedly – procrastinate?

Several local and state therapists weigh in on the answers and offer some of their best suggestions for curbing this self-sabotaging behavior. All agree that chronic procrastination is a much more complex issue than a simple matter of laziness, poor time management, disabilities or character flaws.

“I find people who procrastinate are generally self-aware and usually understand at least some of the reasons they do it,” explained Brian Sullivan, Psy.D., a licensed clinical psychologist in Charleston who is in his 28th year of practice. “Research points to several root causes and contributors, two of which are anxiety and depression.”

Dr. Sullivan shares a three-fold approach with his clients:

When depression or an anxiety disorder is linked to procrastination, he addresses those issues as well.

Greenville’s Lorry G. May, LISW-CP, recognizes a link between an ADHD diagnosis, anxiety and dopamine deficiency.

“When people with ADHD postpone tasks that seem overwhelming, their brain releases a pleasant reward of dopamine. Then, during the last-minute rush to complete a delayed activity, another dose of dopamine activates the adrenal glands to provide extra energy for the task at hand,” May explained. “Unless addressed, the immediate chemical rewards for procrastinating tend to win over the long-term goals for achievement and success.”

May believes there may be a genetic factor at play, especially in cases where a client has ADHD symptoms. Procrastination could also be an adaptive behavior or learned as the result of living in a home with other procrastinators.

May teaches her clients how to implement structure in their lives through calendars, planners, phone applications and any other tools they are willing to try. Creating schedules and to-do lists, using Post-it notes and sharing their efforts for positive feedback are also some of her helpful strategies.

According to Katelyn Campbell, Psy.D., another of Charleston’s private practice therapists, “If a certain task involves high levels of concentration, any sort of difficult emotion or isn’t engaging/exciting enough, clients may avoid feelings of anxiety, dread or boredom by postponing the task.”

“Gradually, these people become accustomed to only working under time-pressure conditions and the increased level of adrenaline/stress associated with meeting a deadline,” Dr. Campbell adds. “Working without the stress of the time crunch becomes difficult.”

Dr. Campbell considers perfectionism another root cause of procrastination. Those who fear failure or disappointing results from their efforts may be willing to be judged as lazy underachievers rather than risk being viewed as less than perfect. She incorporates anxiety-reducing strategies and therapy to help her clients let go of the unrealistic self-demands of perfectionism.

Greenville family therapist Kelly Roseberry, Ed.S., LMFTS, CSOTS, opened her practice, All About Change, “to try to keep struggling kids out of facilities by addressing family issues within the home before things spiral out of control.”

While procrastinating may be only one piece of the relationship concerns, she recognizes the negative ripple effects of living or working with a habitual procrastinator.

“I find that helping clients learn to follow a daily agenda, plan for projects and avoid last-minute overscheduling reduces stress, not just for the individuals but for their loved ones and co-workers,” Roseberry said. “Finding balance is the key.”

The Anatomy of Procrastination

Scientists have discovered that when stress and anxiety arise, the brain’s automatic limbic system – where mood control is the priority – races against the amygdala in the prefrontal cortex – where thinking and decision-making are conscious efforts – to reduce the perceived immediate danger and its accompanying anxiety.

If the limbic system wins, people push the negative feelings away by postponing the stressor and are subsequently rewarded with a burst of the feel-good neurotransmitter – dopamine.

Curb Procrastination With These Tips