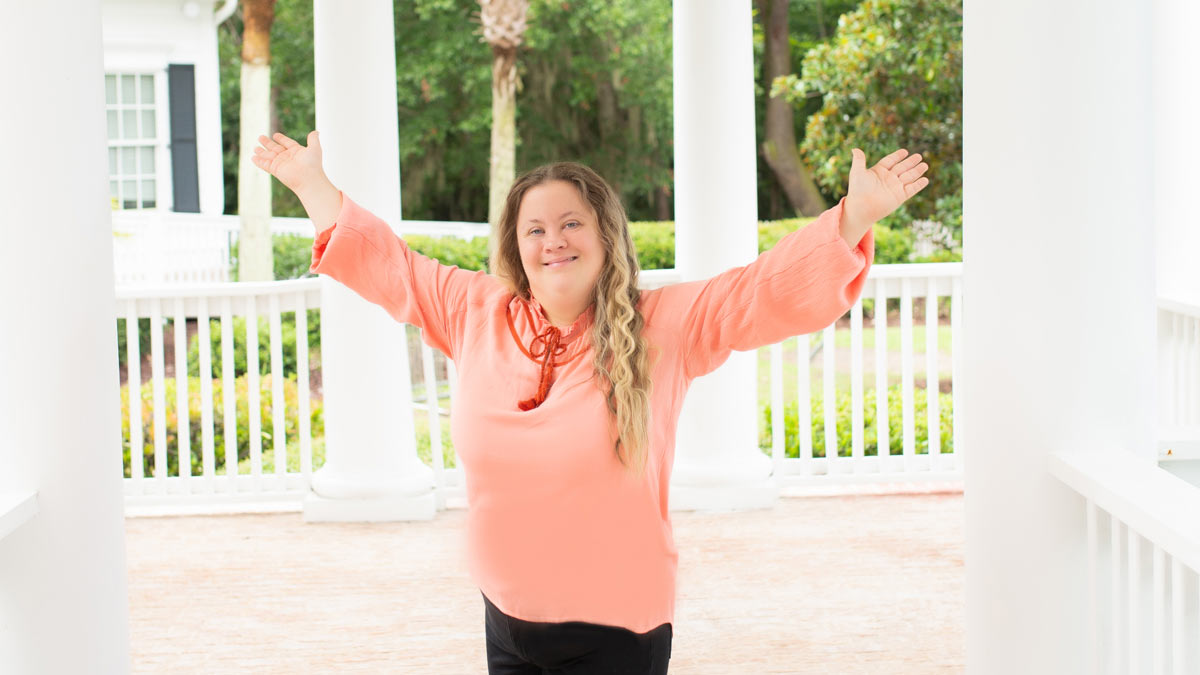 For her entire life, Trista Kutcher has reached for the stars.

At only 32 years old, she owns her own company, Trista’s Sunshine Company. Her hand-sewn products are sold in multiple stores in the Charleston area, in Colorado and online, and she’s looking to expand.

She has more than 50,000 Instagram (@tristathebarista) followers, and she helped open Bitty and Beau’s coffee shop in Charleston. The first barista hired, Trista eventually became the shop’s Charleston community relations director. She’s a two-time gymnastics gold medalist and was one of the top-scoring qualifiers on her high school cheerleading squad.

Trista has accomplished more than many people her age, and she does it all with Down syndrome, a genetic condition that can cause intellectual and developmental disabilities. Her parents never believed her disability would keep her from living up to her potential.

“The geneticists came in to confirm the diagnosis two days after Trista was born,” said her mom, Rebecca Kutcher. “I was breast-feeding, and it was not going very well. I was struggling, which is typical when you have a baby with Down syndrome. They can have a hard time latching because of low muscle tone. The geneticist who was sent to confirm her diagnosis came in and walked across the room, very nonchalantly, and just took her right out of my arms. He looked her over and said she definitely had Down syndrome.”

“He handed her back, and, when I struggled to breast-feed, he told me to not worry and that we would just do bottle feeding. But as soon as he walked out of the room, she latched on and didn’t stop. It was such a great symbolic moment for us that we should never put limits on what she would be able to do. We offer her experiences and never expect that she won’t be able to do anything,” Kutcher added.

According to the Mayo Clinic, Down syndrome is caused by abnormal cell division, which results in a full or partial extra 21st chromosome. The symptoms of Down syndrome vary greatly depending on the individual, but some of the more common traits include a flattened face, upward slanting eyelids or a short height. People with Down syndrome also often have increased flexibility in their joints, poor muscle tone and mild to moderate cognitive impairment, especially affecting short- and long-term memory.

But the disabilities that come with Down syndrome often aren’t completely limiting. Cognitive impairment isn’t severe and life span expectancy has dramatically increased over the past 30 to 40 years. With a strong community surrounding them, quality education and a supportive home environment, people with Down syndrome will have no problem with school, work or significant relationships.

Trista and her mother will be some of the first to tell you that a Down syndrome diagnosis hasn’t kept Trista from pursuing the activities she enjoys. In 2003, Trista competed as a gymnast in the Special Olympics World Games and won two gold medals.

“It was so awesome,” said Trista. “I learned so much. I’m very flexible and strong, and it’s really hard to compete.”

When she returned home, she decided she wanted to try out for her high school cheerleading team. The tryout process was intense; her school has a very selective and competitive cheerleading squad. But she blew the judges away, earning the sixth highest score of all of the girls who made it onto the team.

Trista kept up with her athletic endeavors after graduating from high school by taking hip-hop dance classes and competing in Special Olympics basketball.

“It’s so much fun. I can meet new friends, and I try to make my coach happy,” she said. “I lead stretches and I challenge my team to do sit-ups, push-ups and jumping jacks. And I help out with the little kids. I love to work with kids.”

Today, Trista runs Trista’s Sunshine Company. She was inspired to start sewing by her grandmother, who was a talented seamstress, and Craig Conover, owner of Sewing Down South and one of the stars of Bravo’s “Southern Charm.”

She began sewing as a hobby in 2019, starting with dog bandanas, gift bags and ornaments, expanding her product line as her business grew. She now sells items such as tote bags, headbands, scrunchies and baby burp cloths online and in stores across the Charleston area and in Colorado. She encourages parents of children with Down syndrome to think positively about how fulfilling their children’s lives could be.

“I would tell them ‘don’t be scared,’” she said. “They can do whatever they want to do. I have a small business, I’ve had a lot of jobs. I’ve modeled. They just need to get out there and get excited and believe in themselves. Don’t stop.”

Rebecca said Trista has provided her with new perspectives and that she can’t imagine she’d be the person she is today without her daughter. She understands that parents of children with Down syndrome may want to be overprotective and tend to think about what their children won’t be able to do, but her advice would be to avoid limiting their expectations.

“Trista wasn’t off the charts with her abilities, but when you have the necessity or you’re expected to do something, you figure out how to do it,” she said. “Don’t limit them in any way, shape or form. Looking at 32 right now, what matters is that we know how to find things on a computer and research something. We know how to pay bills. We know how to make ourselves understandable. We know that we want to be independent and not depend on our parents all the time but that we can ask for help.”

The expectations her family has for Trista have helped push her to pursue her dreams, whether competing worldwide in gymnastics, making the high school cheerleading squad or running her own business. And, while she does all of that, she lives up to the name of her company by exuding sunshine.

“To make the world a better place, you have to tell people that you love them. I like to spread happiness, and I love helping people. I care about people, and if somebody is sad, I like to make them happy,” Trista said.

If your store is interested in carrying Trista’s products, visit tristasunco.com or email [email protected] for more information.