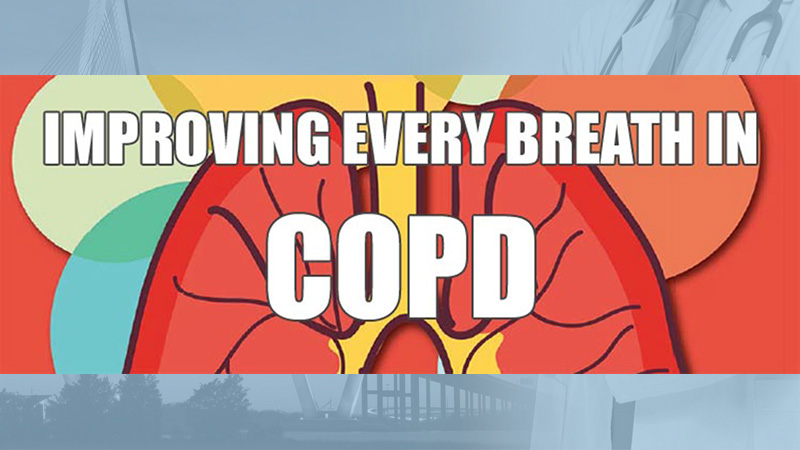 “But COPD is first and foremost a smoking-related lung disease. If cigarettes didn’t exist. I would literally be out of a job…”

Sting may have been thinking about a possessive lover when he wrote the hit, “Every Breath You Take.” But he might just as easily have been writing an anthem for pulmonologists. Their goal is helping to provide a better quality of life for patients whose every breath is impacted by chronic obstructive pulmonary disease – COPD.

An umbrella term that encompasses both emphysema and chronic bronchitis, COPD is a progressive disease with no known cure. Its symptoms, which include shortness of breath, particularly during athletic activities, wheezing and a chronic cough, can easily be written off by sufferers as signs of aging, fatigue or the after effects of a recent cold or bout with the flu. According to the COPD Foundation, an estimated 50 percent of people with this disease have these telltale symptoms without being diagnosed. While asthma is also an obstructive respiratory disease, it is not considered to be part of COPD. However, the most common misdiagnosis of COPD is asthma.

Dr. James J. Carswell, who practices in Mount Pleasant and downtown Charleston at Charleston Pulmonary Associates, has 20 years of hands-on experience treating COPD. In his view, of the two COPD components, chronic bronchitis is the more serious disorder.

“Chronic bronchitis creates more symptoms and is more distressing than emphysema,” he said.

Asked why he was drawn to a medical specialty focused on a disease that cannot yet be cured, Dr. Carswell said, “My original attraction to this field was that pulmonologists do intensive care work, and I both like that work and am drawn to solving problems and helping very sick people. It’s accurate to say that COPD has no known cure. However, even if medical science can’t make this disease go away, it can at the least make most of its symptoms more manageable.”

Dr. Carswell’s number one piece of advice to every patient is, “If you smoke, quit. If you don’t smoke, don’t start. Genetics can play a small part, as can some environmental factors. But COPD is first and foremost a smoking-related lung disease. If cigarettes didn’t exist. I would literally be out of a job, and that would be fine with me.”

Another expert in this field is Dr. Charlie B. Strange, professor of Pulmonary and Critical Care at the Medical University of South Carolina. He suggests that COPD can actually be considered a pediatric disease.

“For whatever reasons – heredity, smoking at an early age, exposure to second-hand smoke or other environmental factors – about half of the general population never achieves their optimum lung capacity, which should occur around age 20. And, if they don’t, the progression is steadily downhill until many COPD symptoms begin showing up at age 50 or 60,” Dr. Strange said.

With no cure in sight, what help can pulmonologists offer?

“It depends upon how serious the patient’s symptoms are,” Dr. Carswell said. “Some people might not need any ongoing treatment. They might be able to get by with a rescue inhaler, which gives immediate relief for an acute episode of coughing or wheezing. Others, with more severe and frequent symptoms, need daily management. Our principal tools for this are a range of medications delivered by inhalers that decrease inflammation in the airways, which reduces the risk of coughing and also opens the airways themselves.”

In extreme cases, surgery has been tried with some success. As Dr. Strange explained, “Emphysema gives you holes in your lungs. As you breathe in, your lungs hyperinflate. They get too big and press down on your diaphragm so that you can’t take deep breaths anymore. About 15 years ago, the idea of removing about a third of the lungs of a patient with extreme COPD was tested in a large study. The hypothesis was that the remaining healthy lung tissue would take over that portion’s function. It was a last resort measure, but it worked in that it increased COPD survival for the next seven years.”

Today, pulmonologists use a bronchoscope to collapse portions of the lung with emphysema. This allows the rest of the lung to get good air and better blood flow. If successful, the patient experiences fewer bouts of shortness of breath.

To that end, two medical equipment companies have developed one-way valves that can be inserted into the lungs using a bronchoscope. Inserted into the lobe of the lung with the most emphysema, these valves let air exit the lung but not flow back in. The lung then shrinks, the unaffected portion of the lung takes over, the diaphragm comes up to where it should be and the patient is no longer short of breath because his lungs are no longer hyperinflated.

But there’s a catch. While the one-way valve procedure has met all the criteria for testing set out by the Food and Drug Administration, the FDA rejected it on the basis of “not being adequately clinically effective.” At the same time, the one-way valve procedure has cleared the hurdles of the major European regulatory agencies and has become widely available on the other side of the Atlantic.

“It’s been a tortuous process trying to get this procedure approved by the FDA,” Dr. Strange noted. “We do not have a way to give a valve to a patient in the United States, but that patient can go abroad and get it and some of my patients do just that.”

Another endobronchial coil device, he said, shows additional promise and will be assessed by the FDA later this year.

What other hope lies ahead for COPD patients? One technique is cryo-ablation of the mucous glands so that the patient no longer brings up excessive mucous. Also, a number of drug companies are looking for new medications as well as experimenting with ways to actually grow new alveoli, the grape-like clusters of tissue within the lungs that are essential for the transfer of oxygen. They could actually improve lung function rather than simply slowing the progression of COPD.

Meanwhile, pulmonologists such as Dr. Carswell stress that COPD patients should keep up with all their vaccinations, especially pneumonia and influenza shots. He believes patients with a long smoking history should also be given regular low-dose screening CT scans to spot any cancers when they are small, limited and more easily treated.

“This is a new development in pulmonology and COPD care,” he said, “and it’s been very helpful over the last few years.”

For patients with COPD, maintaining respiratory health is an ongoing challenge, one that will continue to keep pulmonary medicine focused on them “with every breath they take.” 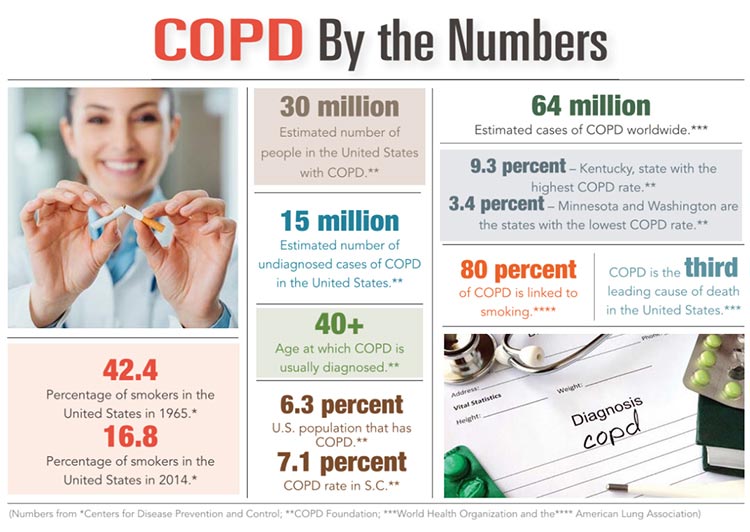