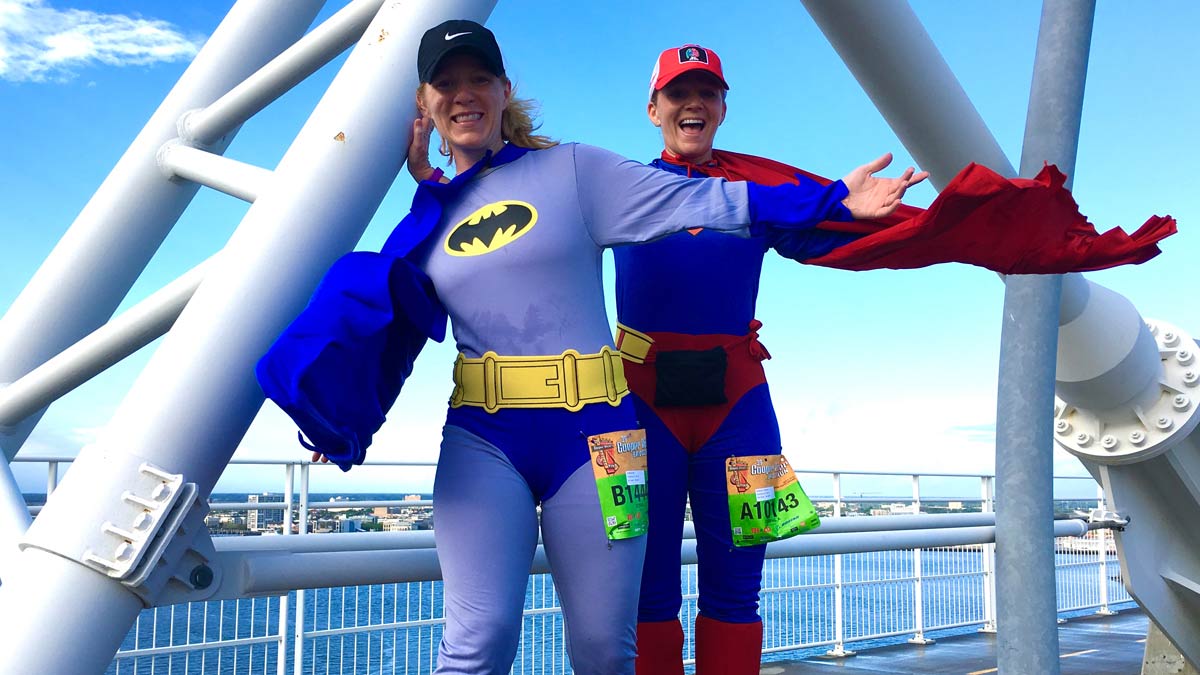 Ultramarathon runner Catherine Rubinstein said that of the 52 marathons and ultramarathons she has under her belt, one of her favorite races remains the Cooper River Bridge Run. She has run it so many times, she has lost count, having completed almost every single bridge run since the early 1990s.

But, back then, until 2008 to be exact, she was not an ultramarathon runner.

“I would run from January to April to get ready for the bridge run, and then I really wouldn’t run again until the following January. The bridge run was my race, I guess you could say,” she said.

When she was bitten by the running bug though, it was a pretty hefty bite. It was on her 40th birthday in 2008 that she decided to run more than just the Cooper River Bridge Run. That was the year that she signed up for her first marathon – the Marine Corp Marathon in Washington, D.C. And so her love affair with long-distance running began.

“My dad is buried in Arlington, and that is my parents’ hometown, so it meant so much to me to run that race,” she reminisced.

In fact, she ran it two more times – in 2009 and again in 2015. And she just kept on running. Many of the 52 marathons and ultramarathons she has run have taken her to exotic and adventurous places all over the world. She has run marathons on all seven continents, at places including the Great Wall of China; the Inca Trail in Peru; Antarctica; Rome; Cape Town, South Africa; and the Australian Outback. As a competitor in the Rim2Rim2Rim, she ran across the Grand Canyon and back in one day. She has completed one full Ironman and many ultramarathons, including a 100 miler in December of this past year, 100-kilometer races, 50 milers and 50Ks.

And, if you don’t think that is enough in just over 11 years, she is almost finished with the World Marathon Majors. She has completed four of them in New York, Chicago, Boston and Berlin and will complete Tokyo in March and London in April.

Rubenstein works full-time at the Medical University of South Carolina as a nurse practitioner in the pediatric cardiac surgical division, and she is married with two sons – ages 17 and 22. She wants people to know that it is never too late to get moving and to make health a priority. At 51, she is in the best shape of her life.

Rubenstein said she stays trained for a marathon at all times, running five to seven miles on Wednesdays and her long runs on Saturdays, usually 10 to 20 miles. She attends Boot Camp at the MUSC Wellness Center three mornings a week, and on Fridays she lifts weights.

“Sundays are my rest days,” she said.

When she is training for an ultramarathon, she can run up to 40 to 50 miles on a Saturday.

“The key with that is breaking it up. So you would do 20 miles in the morning and 20 that evening,” she explained, adding that she will also incorporate speed workouts when she feels she would rather “race” rather than just “run” one of the events.

“Go figure though. My three fastest marathons were the ones I did not plan to race,” she reluctantly admitted.

“No boxed food. I try to keep it as non-processed as possible,” she said, noting that she needs about 70 grams of protein in a day to stay strong.

Sleep is important as well. She said she can’t get by without at least six hours in the sack. She completes her workouts in the mornings so they don’t interfere with her family activities.

“I sometimes have to get up at 4 a.m., but I get it done and it feels good to get it out of the way in the morning before my day begins,” Rubenstein said.

She explained that lack of sleep leads to an increased risk of injuries.

“There’s a growth hormone that repairs your body at night while you sleep, and, if you don’t get enough sleep, your tissues can’t repair themselves,” she said.

Rubenstein doesn’t like to run on the treadmill, because just being outside is a big part of her routine.

“There is no such thing as bad weather, just bad clothes,” she said, adding that fluids are important, especially during the Lowcountry’s hot summer months. “That is key to running in the heat. You have to be hydrated.”

Rubenstein attributes her ability to remain relatively injury-free over the years to making sure she is in the right running shoe.

“Also, I recommend training correctly. You don’t want to sign up for a distance that you shouldn’t be running. That will cause an overuse injury,” she explained.

She also gives credit to her running partner, who she said she could not do any of this without.

“His name is Noah Moore. When we are out there running for hours, we can come up with some crazy things to do, and this has been the case for me in many of the races I have signed up for,” she commented.

As for Rubenstein’s inspiration, that comes from her cardiac patients and other children she has known.

“I think about them and everything they go through when I am having a moment of weakness. They get me through it,” she said.

For women, Rubenstein pointed out, the struggle is real. As a cardiac nurse, she pointed out that “one in four women die from heart disease. Working out is a way to steer clear from that.”

Traveling to a race is a huge part of her inspiration as well.

“Obviously, I love to travel,” she said. “There are certain things I want to do. I wanted to hold a baby panda, and I did that in China. Where else can you do that, really? And as for Antarctica? I wanted to go to a place with the smallest human footprint.”

Rubenstein is writing a book, “How to Run the World,” which will focus on how to prioritize running in your busy life and how to set goals. She also will write about “having that desire and realizing your potential to do it.”

In addition to her regular job, Rubenstein is also working part-time for Marathon Tours and Travel, a running travel agency.

“Using a travel agency is the best way to go for doing what I have done. They can help you find the hotels that are at the starting line or finish line, and they can help you with other logistics of the race,” she said.

Rubenstein has accomplished all of this in just over 11 years at the age of 51, but she said she still has to thank her local community and local races for igniting the interest that was probably always was there. As for the Cooper River Bridge Run, she has this to say: “That’s the race I always do. I love the community involvement and just the whole vibe and excitement. It is the race that started it all for me.”