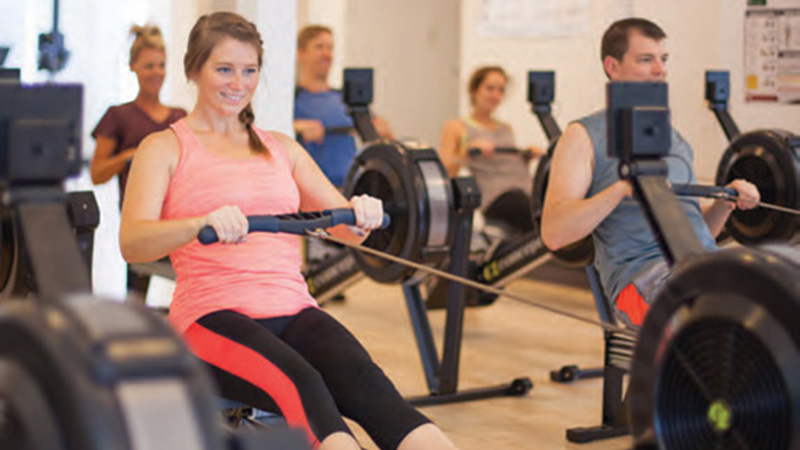 When it comes to physical fitness, who wouldn’t want to choose an exercise that gives you a full-body workout? What sport works all major muscle groups in the body at the same time? Few come to mind, except maybe swimming and cross-country skiing. What about rowing? According to the Coastal Rowing Studio, located in Mount Pleasant, rowing requires the use of 86% of the muscles in the body for each stroke.

“With every stroke, you are utilizing your legs, core and arms,” explained Cheryl Provost, one of the owners of Coastal Rowing Studio.

In fact, it is one of the only workouts you can do that in just one sitting provides strength and endurance and promotes weight loss and toning, all while remaining low impact on the body.

“It’s a continual motion, so there really is no impact on the body at all,” said Provost. “There is no strike or heavy loading on the joints.”

Rowing has also been proven to relieve stress and promote coordination.

Provost said she has taught rowing to people from age 5 to 90.

“It is especially great for older individuals because of the low impact on the body,” she said.

Provost also mentioned that many people seek out rowing because they are dealing with an injury but want to remain active.

“Rowing is perfect for that because we can make adaptations to still be able to row. We even had a client that continued rowing with a broken foot,” Provost said.

There is a class for everyone at Coastal Rowing Studio. PowerRow, which utilizes power to increase the intensity of your workout, is their basic course. EnduranceRow is all about the distance. In this class, participants row for longer distances at a consistent rate. They offer a Row + Go class for people who need to get their workout in just 30 minutes. FitRow incorporates shorter periods of rowing with alternating TRX-styled exercises off the rower. YogaRow is a class for anyone. Provost said they offer either a class that is split 30 minutes of rowing and then 30 minutes of yoga or intervals of about five to seven minutes of rowing with five to seven minutes of yoga.

Rowing 101 is another class they offer to introduce rowing to people.

She said that the beauty of rowing is that all fitness levels can be in the same class.

“We actually have to be in sync in the classes. They have to stay together as if they were rowing the same boat,” Provost said.

She also pointed out that rowing is something that people can find success with more quickly than many other sports that take more practice to master. And, she added, due to its low impact on the body, rowing is a great cross training tool for athletes.

“We know of one person that trained on the rower up until five weeks before her marathon, and she finished it competitively,” she explained. “It increases cardio but doesn’t put that extra mileage on the legs.”

Coastal Rowing Studio opened its doors in April of 2017. Provost said her husband had been scoping out similar businesses opening in the North.

“There wasn’t a rowing studio in our area, so we decided to open one,” she said.

She has been a personal trainer for about four years, and her husband worked for a power plant before opening the studio. His business sense and her fitness knowledge produced Coastal Rowing Studio.