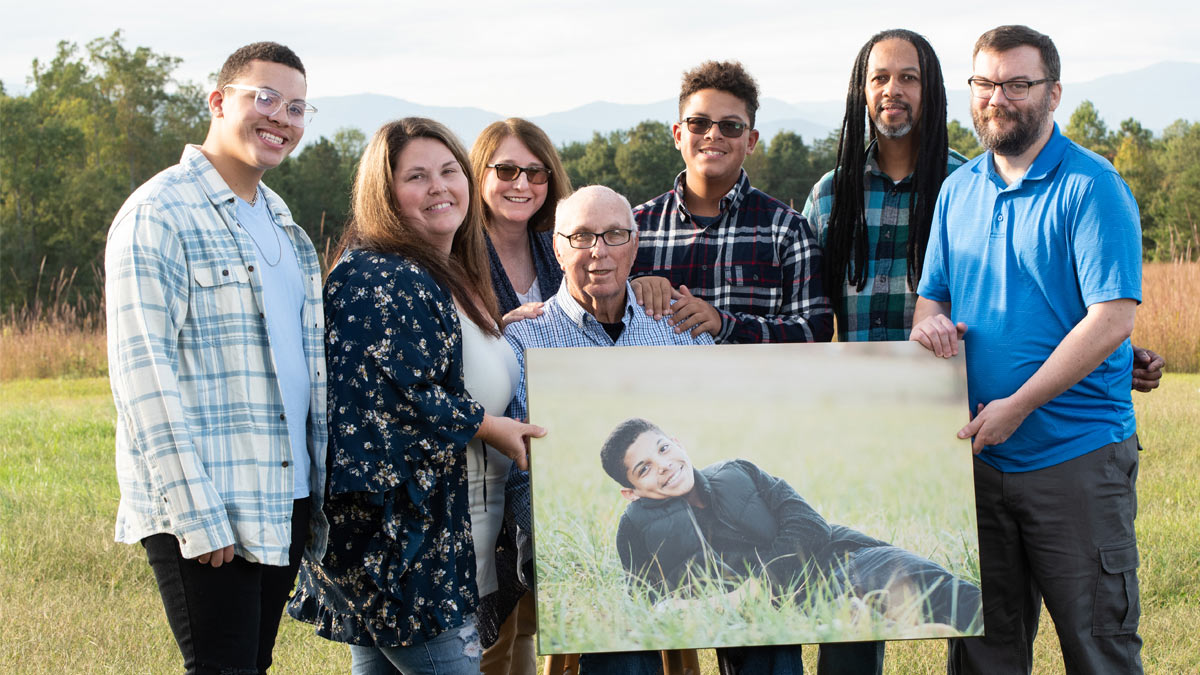 According to the Talmud, whoever saves one life saves the world entire.
If so, Keegan Johnson has saved the world at least three times over.

Keegan was only 17 when he made the choice to become an organ donor. He paid the donation and checked the box on his driver’s license, having no idea he’d be called upon so quickly to make good on that pledge. He simply knew a child who needed a kidney transplant and challenged his football teammates to all become donors. His mother, Allison Miller, remembers that moment: “He said, ‘What will I need them for?’ Four months to the day later, he was gone.”

The vibrant teenage athlete fell ill with what his doctor thought was a viral sinus infection. Within days he developed meningitis. Soon he was gone. His mother honored his wishes to become a donor.

“The minute that we knew God wouldn’t heal him on this side of heaven, we started praying,” said Miller, a devout Christian.

She didn’t know for whom she and her family prayed – for privacy purposes, donor families are not told anything about recipients at the time of transplant – but she was happy for them: “We imagined the phone calls they and their families were getting. Their organs were available. They were going to live and have a second chance. Our boy did that.”

Five of Keegan’s major organs were viable and were given to four separate recipients. His heart, his liver and both kidneys were all transplanted. Miller hoped to connect with the recipients.

These people were now family.

Three of the four recipients have found their way into Miller’s heart. They reached out through We Are Sharing Hope, South Carolina’s federally designated organ procurement organization, which facilitates lifesaving organ and life-enhancing tissue donation across the state.

A teenager named Joya was diagnosed with a rare disease when she was 2; she had numerous surgeries throughout her childhood and had been on the liver transplant list for two years by the time Keegan died.

A nurse, Kimberly, received Keegan’s right kidney. This is her second kidney transplant, and Miller has faith this one will take. Like Keegan, Kimberly is strong.

A man in his 50s received Keegan’s heart; they have yet to connect, but Miller remains hopeful that one day she will hear her son’s heartbeat again.

And then there’s John. He was diagnosed with diabetes when he was 17 and has struggled through the years to manage the disease. By the time John was 39, his eyesight had dimmed, and his kidneys were failing. Life on dialysis is neither easy nor permanent. Without a kidney transplant, he would die. The day John received Keegan’s kidney, he turned off his insulin pump. He has never turned it on again.

John was enthusiastic about getting to know Miller and the rest of Keegan’s family. In fact, he sent Miller a Facebook friend request shortly after they connected. Miller was wary – for her, Facebook was a safe space to talk about Keegan on both the good and the bad days.

“I never wanted anyone, especially an organ recipient, to think we regretted our decision,” she said.

But she took a leap of faith and accepted John’s request – “And then I started stalking.”

She scrolled down his page, taking in his photos and his posts about life and illness. Then she saw what he wrote on the day he returned home from his transplant.

“He posted a devotion that day,” she said. “And when I saw it, I panicked.”

Miller called her sister. “What was Keegan’s favorite Bible verse?” she asked. “I know what it is but I need you to tell me anyway.”

For Keegan’s celebration of life, Allison created baseball cards with his picture and his favorite Bible verse. Miller’s sister read from the card. “Hebrews 12:1. Therefore, since we are surrounded by such a great cloud of witnesses, let us throw off everything that hinders and the sin that so easily entangles. And let us run with perseverance the race marked out for us.”

That was the verse John posted.

“It was like Keegan was saying, through John, ‘Okay, Mama, I’m all right,’” said Miller. “And for the first time I could say, ‘God, he’s completely yours now. I can let him completely go to you.’ That felt like a weight lifted off.”

It was a gift.

John agreed: “I am truly humbled, grateful and honored to have received his gift,” he said. “Keegan saved my life, and three other people’s as well. In that sense, he has accomplished more in his short time than I ever have. He’s a hero – plain and simple. I think Keegan would have wanted all the readers to know he made the choice to demonstrate love to others.”

Most days, Miller knows that. Some days are still hard though. Keegan’s birthday is coming up, and it’ll be the first without him. But knowing her son lives on in the bodies of others gives Miller joy, and she clings to her faith. She knows Keegan would want her, John, and all the others to run with perseverance the race that is marked out for them.