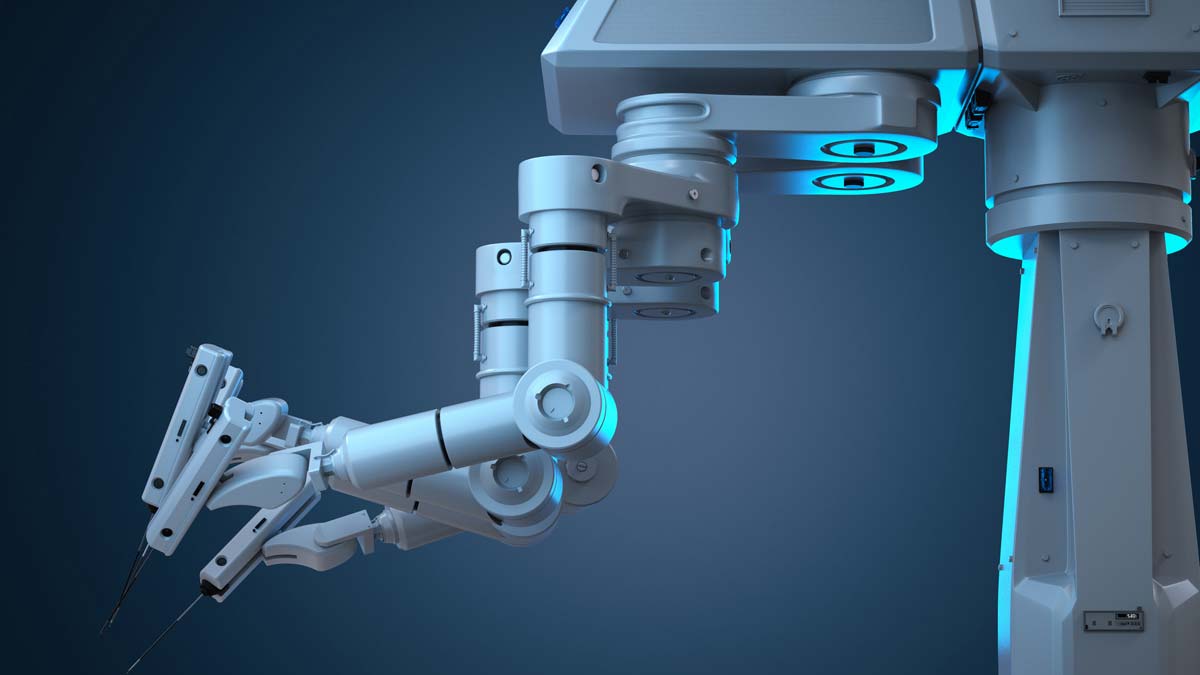 As medicine moves into the future along with other facets of life, patients expect technology to accomplish many tasks, from managing personal data to measuring vital signs. Yet technology is actually changing far more in the medical field than just these familiar things. Namely, surgery itself, which was always performed by the careful hand of a physician and is now becoming more sophisticated and better than ever, thanks to the precision of a computer.What exactly is robotic surgery, also known as robot-assisted surgery? Essentially, rather than having a surgeon stand at the patient’s bedside as he or she would in a traditional operation, the surgeon sits at the console of a special computer, controlling the maneuvers of a machine. It might sound odd at first, but because robot arms can reach trickier places in the body and perform more precise incisions, these surgeries are gaining credibility in a myriad of operations, from heart to bone to bladder. Physicians in the Lowcountry are using robotic surgery more and more and seeing better results, shorter recovery time and more satisfied patients.

Dr. Marc Katz, chief of cardiothoracic surgery at the Medical University of South Carolina, uses robotics for a number of operations, particularly those concerning the mitral valve. Whether a patient requires a valve repair or total replacement, the use of the robotic system is a powerful computer interface between the surgeon and patient, allowing precise movements through much smaller incisions or ports.

“I use it most commonly for mitral valve repairs. It allows remarkably better visualization of the valve and supporting structures, lending to more precise and effective repairs,” he noted. “Multiple studies have shown that repairing a mitral valve instead of replacing it results in lower rates of complications and better long-term results. Additionally, in cardiac surgery, the system is used to facilitate closure of holes in the heart, removal of masses and procedures for atrial fibrillation. Dr Lozonschi, one of my partners, uses it routinely for coronary bypass surgery.”

Meanwhile, Urologist Dr. Ted Brisson, who is on the medical staff at Trident Medical Center, uses robotic surgery for a number of operations pertaining to the bladder, uterus, prostate and kidneys – but said pelvic prolapse repair is now its most frequent use for him. Affecting many women the years after menopause, pelvic prolapse can make it difficult to empty the bladder completely or perform daily activities.

“We’re finding more and more applications for robotic surgery. We’ve done essentially every urological procedure we can do with it,” said Dr. Brisson. “Now women don’t have to live with pelvic prolapse issues at all; in an hour-and-a-half surgery, their prolapse can be completely corrected. The robot also allows us to operate safely and effectively on older patients – it is less stressful on the body.”

Even knee replacement surgery benefits from the help of a robot, according to Dr. Brodie McKoy and his partner, Dr. Harold Schutte, at Southern Orthopedics & Sports Medicine.

“The biggest advantage is being able to rotate the preoperative image 360 degrees to get the right fit,” Dr. McKoy said. “It’s like shoes – it has to be a perfect fit every time. The bone cuts are so precise, you don’t need cement, which means one fewer thing to fail later.”

“It’s not like robotic car-making because the surgeon is an intimate part of the procedure,” remarked Dr. Schutte. “The advantage is it allows you to more accurately position the implants of the knee both before and during the surgery so you have a more natural feeling knee and longer lasting.”

Yet, for all of a robot’s precise movements, the doctors assured me there is no way to leave the room during surgery and have the computer run on “autopilot” – an actual person must be present. In other words, a surgeon and a robot together make the perfect pair. The robotic system is a tool that allows the surgeon to translate his normal operative actions through tiny ports to minimize the invasiveness of the procedure. All activity is directly related to the movement of surgeons’ hands.

“There are techniques that I can absolutely do better with the improved visualization of the robotic system,” Dr. Katz said. “Avoiding splitting the breast bone, as we would do in traditional open heart surgery, is a tremendous advantage for patients, allowing shorter hospital stays, more rapid recovery and return to full activities.”

“The goal is to have a handcrafted product but with the computer offering guidelines and parameters. All of the decisions are still made by a human,” explained Dr. McKoy. “But the best surgeon cannot with his own hands and eyes outperform a robot.”

Though the doctors said they still discuss traditional surgery with the patient in order to cover all options, most patients end up choosing the robotic surgery, presenting numerous opportunities to perfect the craft. Another advantage for patients is the broad spectrum of options transcatheter and robotic procedures add.

“We use a multidisciplinary approach to find the best and least invasive option to help each patient achieve the optimal results,” Dr. Katz added.

“I had the third robot in the country back in 2001,” said Dr. Katz. “I was in Virginia at the time and have been using each new iteration of the system since.”

“What was once experimental is becoming the standard,” added Dr. Schutte. “But there is a learning curve, so it’s good to be an experienced surgeon before using the robot.”

Fewer complications and swifter recovery are the key reasons both surgeons and patients are choosing robotics as the better way to operate. The growing number of success stories in this area mean more patients have better, less invasive options to relieve their symptoms and rapidly regain their quality of life.

Trident Medical Center cardiothoracic surgeon Dr. Karen Gersch specializes in robotic heart and lung surgery. She said the technology has revolutionized her specialty and has also given new hope to patients who were once considered too sick to have lung surgery.

“Traditional lung surgery is very invasive. Often, multiple ribs are broken to get access to the lung, and the nerves that run along each rib are injured, causing permanent pain. In addition, the recovery for such a surgery takes months and months,” she said. “With minimally invasive robotic-assisted surgery, I can avoid the ribs to get access to the diseased area. Our data is pretty clear – robot technology provides excellent patient outcomes compared to traditional surgery. Most of my patients have surgery on Wednesday and are home on Friday.”

“A patient sent me a photo – she’s a 74-year-old woman, and the photo is of her on a jet ski,” Dr. Katz said. “With traditional open heart surgery, her recovery time would have taken three months. It was a mere three weeks after the procedure that she was back to activities that made her life more exhilarating and meaningful.”

“We’re convinced that the number of patients who aren’t happy with their standard knee replacement would be happy with a robot-assisted replacement,” said Dr. McKoy. “The risks are fewer with a robot. It’s definitely going to change the future.” 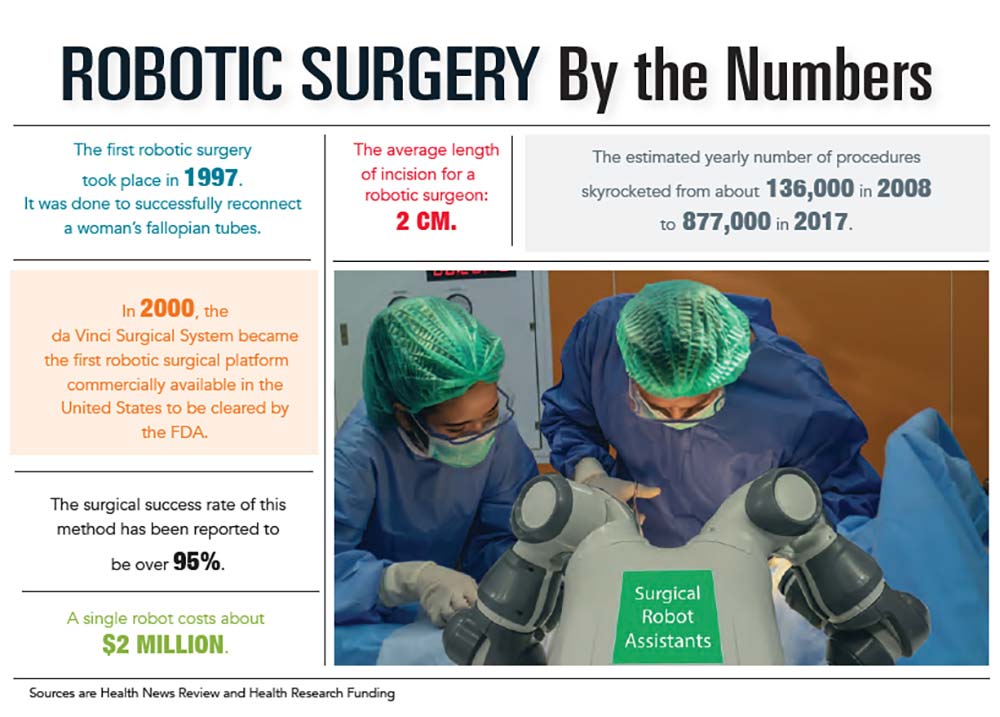