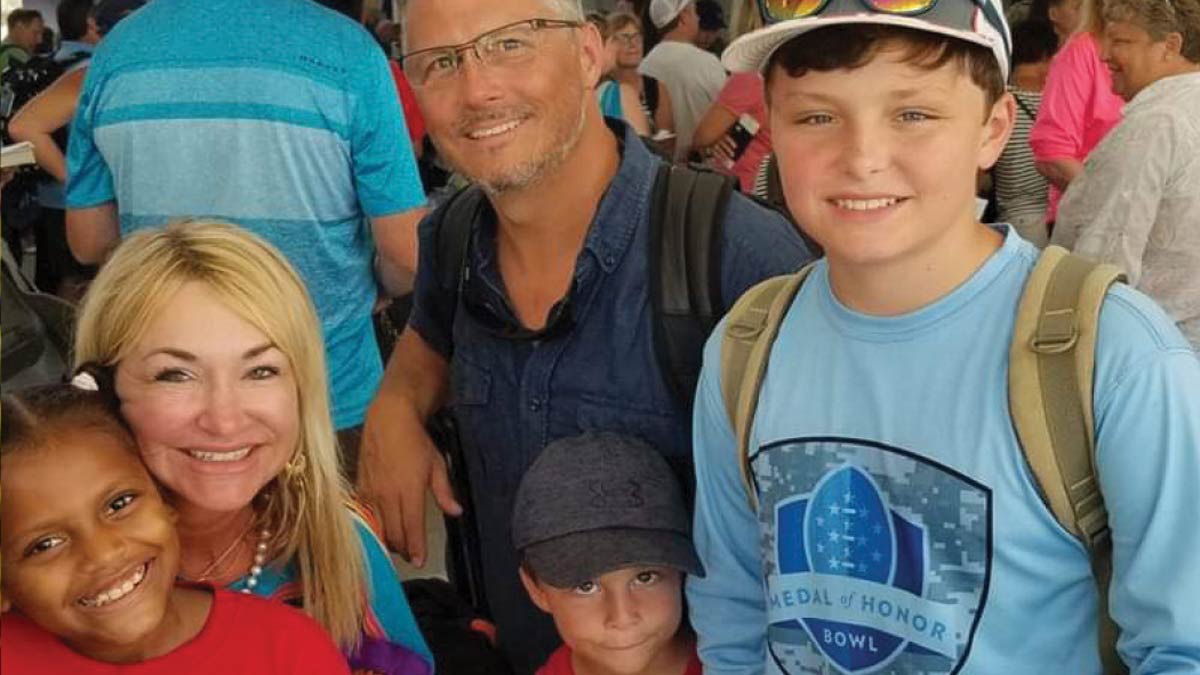 Roatan is a tiny island in the Caribbean, just off the coast of Honduras. Picture this: clear blue ocean, shore-side tiki bars and small cottages located directly on the beach, porches adorned with hammocks and vast ocean views. It’s paradise and a great place to vacation, especially when you have a reason to get away.

Michele Hensel of Mount Pleasant needed that vacation in October 2014. Her father had unexpectedly passed away and her best friend had been diagnosed with metastatic melanoma.
Hensel had actually been to Roatan before – earlier that year, in fact. She loved the island and its people so much that she and her husband went back again on Thanksgiving in 2014.

During those trips, Hensel, her husband – local Plastic Surgeon Dr. Jack Hensel – and their two sons became instant friends with Steven Hamilton, the guide who drove them to and from the airport. They also were Facebook friends, which allowed Hensel to keep in touch with him between trips.

It was the story about his daughter, Rihanny, that Hensel just couldn’t shake. At just 5 years old, she was very sick, and Hamilton said the doctors in Honduras didn’t know what was wrong with her.

The catalyst for Hensel was seeing Facebook photos that Hamilton posted of her in the hospital two years after she had first met them.

“We were back in Roatan in August of 2016 after a mission trip in Honduras. We found out that Rihanny had almost died twice before our trip. We took her to a doctor and had bloodwork done, and my husband determined that she had sickle cell anemia,” Hensel said. “We were told by her doctor there that the only way Rihanny could survive would be for her to get medical treatment in the United States.”

Hensel left Roatan not knowing what to do next. When she told the staff at Dr. Hensel’s plastic surgery practice about Rihanny, she found out that one of their patients was a sickle cell specialist. Not only that, but, at that time, she was the director of the Sickle Cell Department at MUSC.

“It was God’s work. That is all I can say,” Hensel commented.

At that point, she got the ball rolling on the paperwork to get Rihanny to the United States for medical treatment. She had a letter from her husband’s patient, the sickle cell specialist, stating that she, Hensel, would be her medical caregiver and that the Hensels would care for Rihanny financially. The child’s visa was approved that October, not long after their last visit. Later that month, Rihanny boarded a flight with Hensel to begin her new life in the United States. She has been living with the Hensels for almost four years now, and, since coming to the Lowcountry, she has had minimal disease-related complications.

“She is active and is able to participate in all the routine activities of a child her age,” Hensel said.

Dr. Julie Kanter Washko was Rihanny’s original doctor at MUSC. Dr. Washko has since left MUSC and is now the director of the sickle cell program at the University of Alabama-Birmingham.
She said, “Sickle cell is very heterogenous. There is no way to manage the disease for each person. In general, we recommend that individuals lead an overall healthy lifestyle. They need to drink a lot of water every day, avoid sugary beverages, which can dehydrate you, and eat a healthy, well-rounded diet. We also want to encourage some daily exercise. We used to think individuals with sickle cell should be limited, however, we know now that movement is good for everyone, and we want to encourage moderate daily exercise.”

Concerning medications, Dr. Washko said, “Individuals with sickle cell anemia are encouraged to start hydroxyurea, a disease-modifying medication that helps their bodies produce healthy, fetal hemoglobin and decreases their white blood count to reduce cellular adhesion. Adhesion occurs when the cells stick to the inside of the blood vessel. Picture the blood vessel like a busy street. Adhesion molecules are like orange barrels used during construction that can cause cars to stop or have to move around street problems. White blood cells are garbage trucks, which are important but can cause a ‘traffic jam.’ The red blood cells with sickle hemoglobin are more likely to stall and block the road. Hydroxyurea decreases the number of garbage trucks on the road and improves the function of the red blood cells so they are less likely to stall.”

Luckily, Rihanny has responded well to hydroxyurea. The drug, however, is quite costly, and Hensel has had a difficult time getting health insurance for Rihanny.

“It has been a nightmare, to say the least,” Hensel admitted. “She did get accepted for something called emergency Medicaid in 2019, but it was recently cut and I am dealing with that now. Her outpatient expenses are very high. Coupled with the medication, it is too expensive to cover her out-of-pocket.”

Dr. Washko said, “Sickle cell disease is a lifelong condition. It is important that individuals avoid unnecessary stress, as well as avoid smoking, alcohol use and obesity, which can worsen the complications. Symptoms do worsen with age, and ongoing disease management is needed, as well as close follow-up with a sickle cell specialist. Thankfully, we have had two new medications approved in 2019 that will add to the armory of ways we can decrease the complications of the disease. We are also continuing to work on new curative therapies like gene therapy. The future is very bright.”

A possible cure on the horizon is ideal for Rihanny because she cannot get adequate care back home in Roatan if she goes into a sickle cell crisis. Of course, she could get the medication sent there, but the cost is well beyond what Hamilton could handle.

“Luckily, she has not had to be admitted many times since she has lived in the United States, but, the last time she was admitted, it was for something called acute chest. The doctors told us that if she had been in Honduras with that, she would have died,” Hensel said.

With Rihanny being so young, the costs involved in getting cured without insurance and the fact that she is not a U.S. citizen makes things quite complicated.

“There are also so many risks involved, and receiving the curative treatments will not be easy on Rihanny,” Hensel said.

Hensel has started working part-time at her husband’s plastic surgery office because of all the insurance and paperwork she has had to maintain to keep Rihanny in the United States where she can receive medical care.

“We are currently trying to upgrade her visa so she can stay with us. It is lengthy, expensive and time-consuming,” Hensel explained.

Hamilton said he feels blessed to have met the Hensel family.

“Meeting Michele and her family was the best thing that ever happened for me and my daughter. I was in and out of the hospital with her in Honduras for years. It was four times and each time was for seven to eight days. Thank God for Michele and her family. If it wasn’t for them, Rihanny would not be here with us today,” he said.

Hensel never intended to bring another child into their family from another country. She said that it was all “God’s work.”

“When my dad was killed in October, there was so much grief because we were very close, but I think God had a plan in June before that even happened, which was when I first visited Roatan. Only he knew that I would lose my father that fall and my best friend the following year, so our meeting Rihanny and her father and then her coming to live with us has filled that void that needed to be filled,” Hensel said.

The Hensels are still dealing with the complications of Medicaid and getting Rihanny insured, as well as the paperwork and effort to keep her in the United States for as long as they can. At times, Hensel admitted she feels helpless with it all and just hopes for a miracle. She didn’t know the extent of the financial issues or of the red tape when Rihanny first arrived in the United States, but that isn’t to say she wouldn’t have done everything exactly the same.

Although Rihanny’s future is questionable in the United States, hope remains.

“When we went to Roatan for the first time, we found a happy place, and we fell in love with the island, but especially its people,” she said.

The Hensels take Rihanny back to see her father three times a year and still view Roatan as their “home away from home” and their “escape from reality.”

But since Rihanny entered their lives, Roatan means so much more.