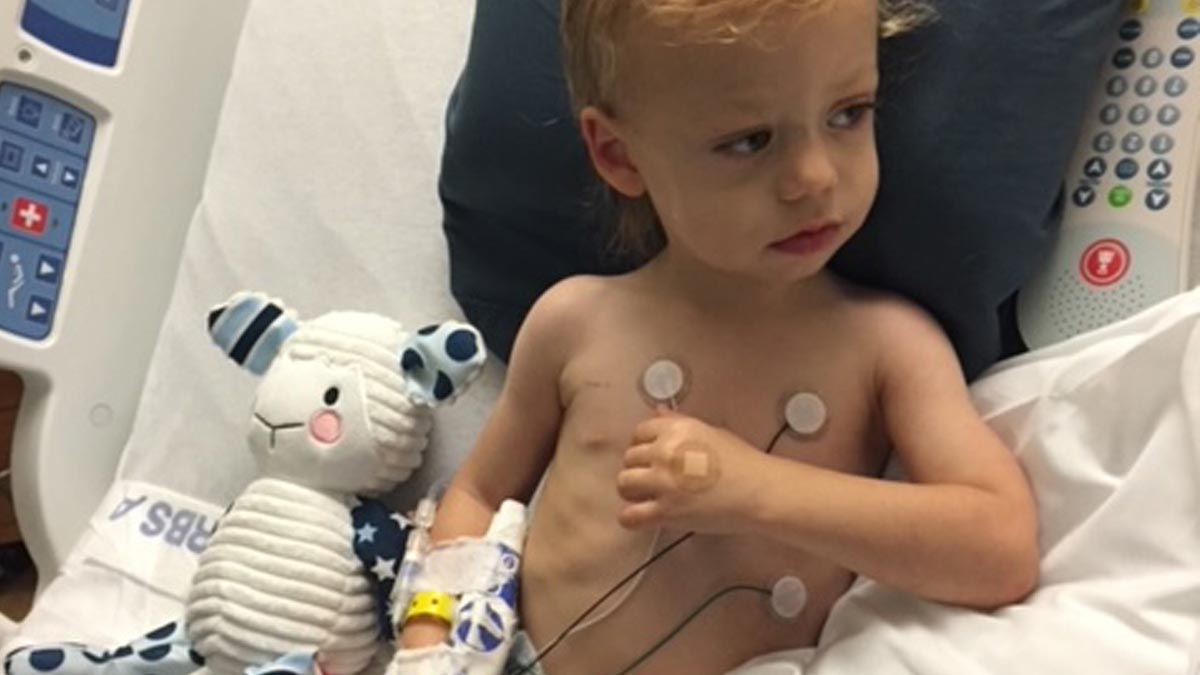 It all started when 15-month-old Toby Brauer took a few clumsy spills at day care. Because of his age, no one thought it was a big deal at first – he was learning to walk and maintain his balance, like many young toddlers. But when Toby’s falling continued to a greater degree than his peers, the day care staff nudged his mother, local dentist Dr. Nicole Dahlkemper, to have her son checked out. An appointment with Toby’s pediatrician did not produce answers, but the child’s grandmother refused to give up on learning more.

“She said I needed to dig further,” recalled Nicole. “So I kept pushing.”

Months later, Nicole was able to secure an appointment for Toby – almost 2 years old and in physical therapy at that point – with a pediatric neurologist at the Medical University of South Carolina. The neurologist ordered an MRI for Toby “just to rule things out.” Unfortunately, the test showed that the boy had a large tumor in his brain, specifically a ganglioglioma in the cerebellum, or brainstem.

Being nine months pregnant with her second child and a former biological neuroscience and psychology double major, Nicole became a strong, anxious presence while she waited for more news.

“I was this huge pregnant woman, going up to the desk and demanding to know what was wrong with my son,” she said, chuckling at the memory. “I was knowledgeable enough to be dangerous.”

Just 36 hours after her son’s MRI and diagnosis with the tumor, Nicole and her husband, also named Toby, were checking in their son for surgery. Mercifully, the tumor was still at stage 1, and the doctors’ plan of action was to attempt removal. The placement of the tumor in the back of Toby’s head meant that it could hinder functions such as coordination and breathing – it was imperative to remove as much as possible.

Nicole shared how they had the unwavering support and prayers of extended family, friends and community during her son’s time in the hospital.

“I don’t know how I would have gotten through that period without the support,” she admitted. “We had a chain of people praying for us. My mom had Catholic nuns praying for us; we have some Jewish friends who prayed for us. A lot of different beliefs, all on his behalf.”

She added that her husband’s brother, who passed away many years ago, seemed to be present as a form of a spiritual calmness inside her toddler at the time of his surgery. Both Nicole and her husband marveled when the boy called his father into the room and began patting him on the back, reassuring him everything would be OK.

The prediction was correct: A portion of the tumor was removed, and the surgery was successful. But young Toby would still require “close monitoring,” and he continues to have five or six different therapies each week – occupational, speech, physical and others – as well as semiannual MRIs.

Could the cancer come back? There’s a chance it could, but Nicole pointed out that she makes an effort to move forward for her son’s sake.

“I can’t live in fear of what might happen,” she declared. “I love him to pieces and I spoil him, but I also discipline him.”

Now 4 years old, Toby is a happy and intelligent child who will be starting preschool at Mount Pleasant Academy around the time you’re reading this article. He loves his younger brother, Alexander – and Alexander is fiercely protective of Toby and “will beat up anyone who harms his big brother.” Nicole is looking forward to her firstborn meeting new friends at school – friends other than his caring therapists, that is — and developing his intellect, which, she said, “has not been affected by his health journey.”

“It’s like he’s learning how to hold a pencil the right way, but, if you met him, you’d be amazed by him,” she beamed. “Kids can rewire. I’m so happy we are where we are.”

Her advice for other mothers? Always trust your instinct and know your child — and if you think something is amiss, trust the feeling.

“I was hoping we would get the MRI and find out nothing was wrong. What he had was rare, but if we hadn’t pursued it, would things have gotten worse?” she asked. “As a parent, it’s about constantly being in tune with your child. If you think something is wrong, trust your gut until you get answers, and do the best you can to get the help your child’s needs.”