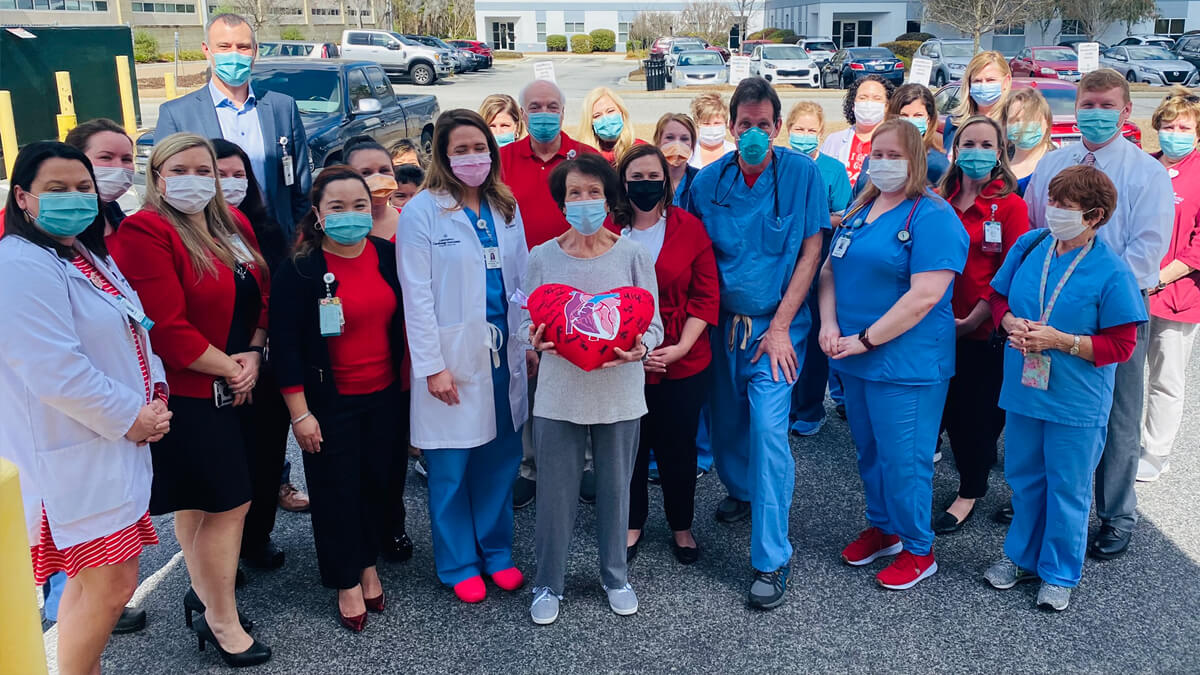 When Grace Shorter and her husband moved from Virginia to the Lowcountry 16 years ago, Grace had just retired from a career in banking and knew she would still need something to keep her busy. She wanted to be around people, so she initially accepted a role with the nonprofit Meals on Wheels. Then, realizing that she’d “always been fascinated by doctors and nurses” — she even once pondered a career in nursing herself — she decided volunteering in the emergency room of Summerville Medical Center might be a good fit.

“I love people,” she enthused. “And I love being sociable. Seeing people come in who are sick and who are sad, I feel like I am there for them.”

The family environment at Summerville Medical Center is indisputable, according to Grace. During the height of COVID-19, when no one was allowed to volunteer in person, she missed her colleagues and friends sorely and was overjoyed when everyone came back – not to mention awestruck at the fortitude of the medical staff.

“When we all came back last year and we’d lost a whole year, to see the way they work so hard and how they take care of everyone — the nurses and techs in particular — you can feel it’s more than just the education [in nursing school]. You can tell when people are serious about their job and are kind.”

Now Grace’s convictions are stronger than ever. Her own medical emergency, handled with the same care and precision she’s witnessed for 13 years as a volunteer, was far less frightening than if she hadn’t been, well, already at the hospital. It all started Jan. 13 of this year, when she was attending to her regular duties of stocking the small fridges in patients’ rooms with items such as juice boxes and popsicles. In other words, it was a seemingly regular day for Grace. She’d been “moving around all morning,” according to the nurses she worked with, and no one, especially not Grace, could have guessed she was mere hours away from a heart attack.

After a busy few hours, realizing it was almost 1 p.m., Grace headed for the hospital cafeteria to get some lunch before it closed for the day. That’s when she noticed she wasn’t herself.

“I thought to myself, why am I having trouble opening up this little packet of mayonnaise?” she remembered. “Then all of a sudden, I passed out.”

When Grace regained consciousness, she was in a room with a nurse who explained what had happened: She had fallen forward onto the table face-first, knocking over her glass of water. The nurse had promptly called the ER. Dr. Marabel Schneider, a cardiologist, had been on call that day, and Grace was grateful.

“I didn’t even know any of the heart doctors before that,” she said. “As a female doctor, she was incredibly caring and compassionate.”

The news that followed about Grace’s heart came as an absolute shock to her. After all, she’d always considered herself healthy. She walked multiple miles each day, did not eat junk food and drank plenty of water — yet she had hardened arteries and needed three stints.

“They told me a lot of this is hereditary,” she said. “But if anyone had told me, ‘Grace, on Jan. 13 you are going to have a heart attack,’ I would have said no way! I felt great.”

She insisted that volunteering for more than a decade and knowing a lot of people at the hospital made no difference — yes, it’s wonderful that she was at work when it happened, but she didn’t get better treatment than any other patient would.

After about five weeks of rest and recovery, Grace began her rehab program in late February, located conveniently at the hospital. She was cheered by everyone’s warm response when she arrived for her very first day of rehab; she was greeted with gifts, balloons and even television reporters. Despite the fanfare, Grace remained humble and insisted that her recovery is due to the skill and compassion of her team.

“They are all so sweet and know their stuff,” she said. “They check my heart, tell me it’s doing well, then put me on the bike and treadmill. When they’re done with me, I’ll be a superwoman!”