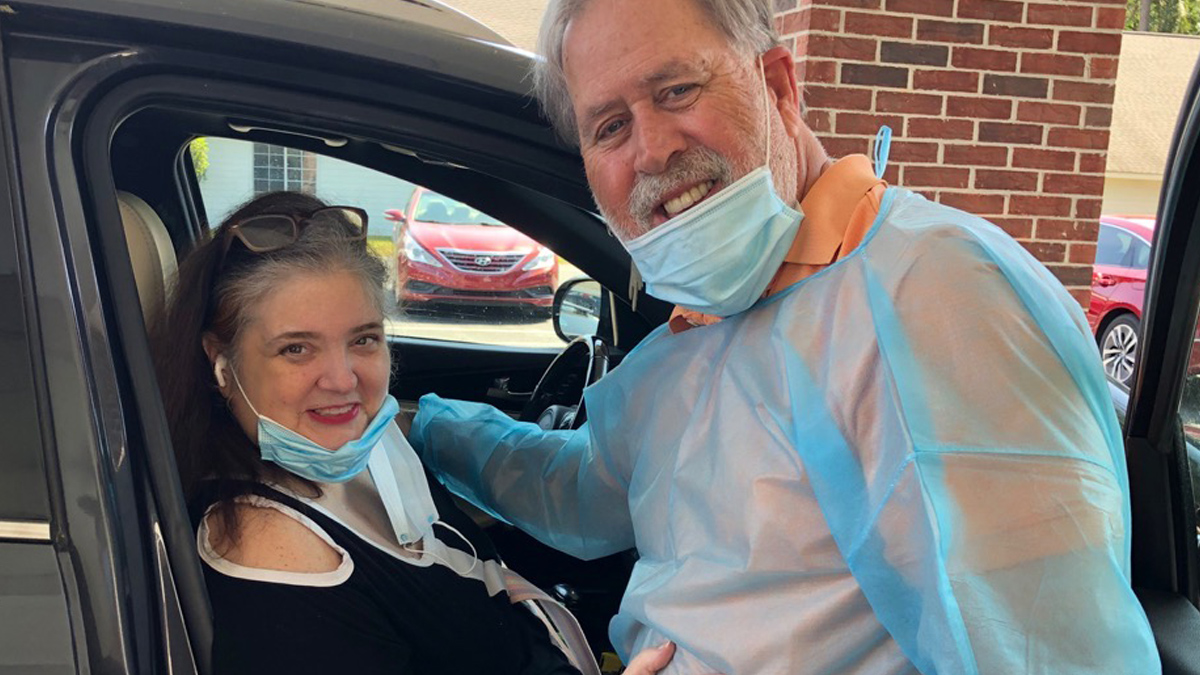 When Donna Williamson left Roper Hospital after a three-week stay for pneumonia, she, as most of us would, expected to gradually feel back to her old self. However, just days later, Donna felt poorly enough to return to Roper, where she received the sobering news that she not only had pneumonia but also COVID-19. She went home with the intention of self-isolating, telling her sister to leave her alone in the house and brushing off advice to go back to the hospital.

But as it turned out, staying at home would have been a fatal mistake. Donna’s husband, Marshall, received a phone call from Dr. Nicole Watson, who witnessed Donna being sent home from Roper. The physician recognized that Donna needed to be re-admitted immediately. Heeding the urgent call, Marshall came home to find his wife already delirious from lack of oxygen and uncertain of who he was. The paramedics arrived, placed Donna into a wheelchair and took her to the COVID-19 unit of the hospital, where she began fighting for her life. This was in December 2020.

Donna doesn’t remember much about those 30 days in the COVID unit, many of which she spent in a coma – and perhaps that is a good thing. During her stay in the unit, her kidneys failed — she was taken downtown for dialysis — and she was on a ventilator. In fact, doctors had given her “a 1% chance to live,” she said.

“While I was in a coma, they called my husband, asking him if they could unplug the machines,” Donna revealed. “And he told them no.”

Eventually, she woke up from her coma, giving family and friends some cautious hope. But Donna was far from out of the weeds. Upon waking up, she discovered she could not feel anything from the neck down — legs, hands, arms, feet or torso. The disorder, known as Guillain-Barré syndrome, or GBS, occurs when an individual’s nervous system shuts down, often in the wake of a virus or bacteria. Then another doctor who came into Donna’s room and found out what was happening offered her a bit of unusual advice — Donna should “talk” to her hands and feet to remind them how much they were needed.

“He said, talk to your hands, talk to your feet, tell them to wake up and do their jobs,” she recalled. “Everyone thought he was crazy, but I started focusing and concentrating, and my right hand started to work!”

With that miraculous morsel of encouragement, Donna felt a new strength rise up within. She was accepted into the Mayo Clinic Health System’s program for COVID long-haulers in January 2021, where she learned things about her condition.

“The first morning at Mayo, they took my blood, then called me and said, ‘we need to give you a shot of [vitamin] B12 — you have none. You must have stopped processing it in the coma, and that is what feeds your nerves,’” she said.

She was told she would need to have B12 shots the rest of her life – and there was a chance she would never walk again since the nerves were “dead in her body,” according to one neurologist. Fortunately, Donna would prove the dismal diagnosis incorrect. In January 2022, she began working with Beth Andrews at Momentum Physical Therapy. It was Beth’s cheerleading that literally moved Donna forward. While she still doesn’t have full use of her left hand, she’s able to get around using a walker or, occasionally, a wheelchair for longer distances.

“When I started working with Beth, I still wasn’t walking,” Donna said. “But Beth was so different from everyone else — she kept saying, if you can do this, then you can do this. She was so positive, and I did all my exercises.”

Donna maintains that she could never have succeeded without the help of a few instrumental people — Dr. Watson, who advocated for her and saved her life, her physical therapist and her loyal husband. Marshall retired in January 2021, according to Donna, in order to take care of his wife, and he slept in the living room right next to Donna’s hospital bed for all the months she was unable to climb the stairs to their bedroom.

“You can’t even explain the love you feel when someone does that for you,” Donna mused.

Her colleagues, too, have ensured Donna is able to continue working as branch manager at The Mortgage Firm. In fact, Donna revealed that 2021 was “one of the best years she’d ever had, business-wise,” thanks to her team’s unwavering support.

“My team has been amazing,” she beamed. “The third month, I called Margaret Bunch — who has been with me for seven-and-a-half years — and I asked if anything was going on. She said no. And I knew there were issues three months in. But they handled everything. Even now, if I’m having a bad day, they step in.”

“When the doctors first told me I would not walk again, I went into a deep depression,” she added. “Luckily, I got back on the horse. I still get tired, but I have to say I was determined I was going to walk again. And now I am.”