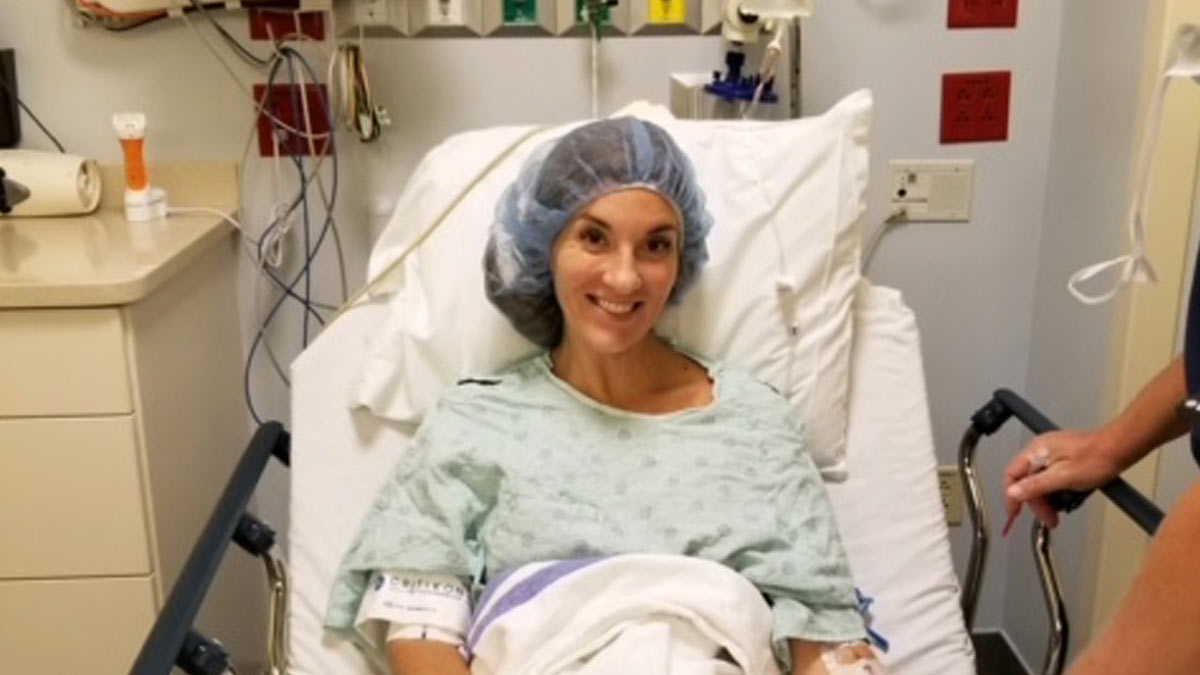 Dr. Lara Lambert always thought of herself as a healthy individual – she enjoyed a healthy diet, drank very little alcohol and did not smoke. So when she started having digestive issues around age 37, she initially brushed it off as part of the stress of her role as a physician at the Ralph H. Johnson VA Medical Center, trained in internal medicine, pulmonary care and critical care. She felt there were no other reasons to be alarmed; furthermore, her labs and bloodwork were coming back normal.

Three years later, however, when Lara turned 40 and was still occasionally seeing blood in her stool, she decided to bring the matter up with her doctor, who promptly suggested a colonoscopy. Lara agreed, and her appointment was set for May 8, 2019, two days before her daughter would be graduating from college.

“I knew the woman performing the colonoscopy, and I wasn’t worried,” Lara said. “But when I woke up afterward, I saw she was white as a ghost. She said she’d found a tumor. My husband — who was my fiance at the time – fainted.”

Lara said her “world flipped upside down” as soon as she received the shocking diagnosis that she had colorectal cancer. No one in her family had a history of cancer of any kind, and she’d always figured cancer was something she wouldn’t have to worry about.

“I was devastated at the news,” she admitted. “My daughter was graduating college the next day – I thought she would need to start planning my funeral instead of planning her future.”

But then Lara’s natural inclinations as a physician kicked in, and she got to work learning more about her diagnosis. She had plenty of access to medical research, and, while she knew a great deal about lung cancer — she takes care of patients with breathing problems daily at the VA hospital — she knew she would need to find out more about her own cancer.

“Once I read more about it, I knew what I was up against would be difficult,” she said. “I was in stage 3, meaning the tumor was large. I knew I would have a difficult fight.”

And fight she did, even continuing to work part-time at the hospital. She endured radiation treatment for five-and-a-half weeks, took a brief amount of time off work for surgery, then transitioned into chemotherapy for six months. The COVID-19 pandemic kept her from seeing patients in-person for two months, but, since returning in June 2020, Lara has worked steadily ever since.

“My bosses are some of the best people; they put their arms around me when I told them and have been so completely supportive,” she beamed.

Lara finds it worthwhile to share her own journey with her patients at the VA hospital. She pointed out that some patients “have gone through similar things and that it’s an interesting journey for her, being both a physician as well as a patient.” She shared how her struggle has enriched her own experience working with patients: Now she listens to them more carefully and understands them to a greater degree.

“I know they want to be heard,” she said. “I want my doctors to know what I’m feeling, and now that translates to working with patients. One patient came in recently who had colorectal cancer as well, and we showed each other our scars. We’d even had the same surgeon.”

As of press time, Lara was grateful to be cancer-free for more than a year, yet she added that her life “will always be different.” She continues to go for lab testing every three months and for the next three years will require an annual colonoscopy. And she monitors her diet more carefully — now that she’s missing a portion of her colon, she keeps an eye on what either speeds up or slows down digestion – and trips to the restroom are more frequent.

And as for the fainting fiance-turned-husband? He rallied, Lara said with a laugh, taking care of their dogs during her treatment, accompanying her to each doctor’s appointment and being “unbelievably helpful.” Lara’s parents, who also live in Charleston, were able and happy to support their daughter. Her father, a physician at MUSC, researched the disease and treatments alongside his daughter, while Lara’s mother prepared healthy meals and hung blackout curtains in the bedroom so her daughter could sleep soundly.

“I’m blessed to have my family here,” Lara commented.

Most of all, Lara now makes it her mission to advocate for colorectal cancer screenings. She’s pleased that the U.S. Preventive Services Task Force recently changed the recommended age for screening from 50 to 45, since colorectal cancers are actually the third leading cause of cancer in women and men and the second leading cause of cancer deaths. She urges people to listen to their own bodies and ruefully admitted she wishes she had done so sooner. The symptoms can include blood in the stool, constipation, diarrhea, weight loss, pain and anything unusual concerning digestive habits.

“This journey has made me realize how important awareness and advocacy are,” she pointed out. “My daughter, still in her 20s, is going to get screened at age 30 now that I’ve had it. She’s a little salty about that — but she understands that it could be lifesaving.”