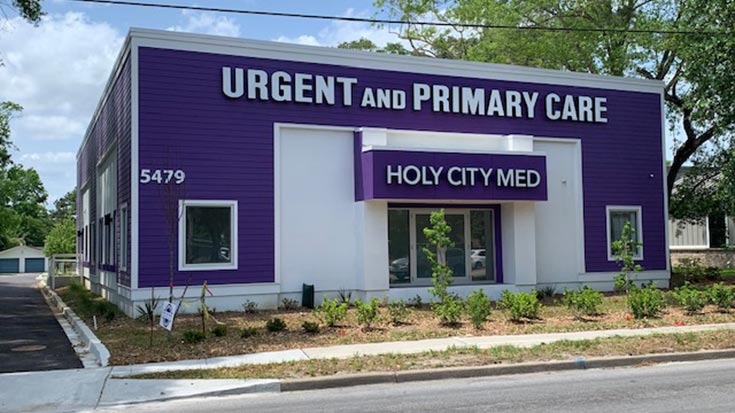 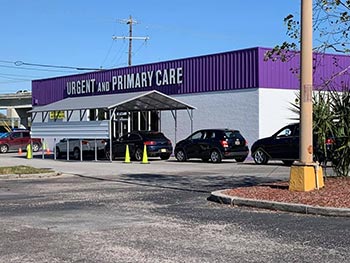 Holy City Med combines three Fast Affordable Quality (FAQ) proven systems to provide patients with a real choice in medical care, to include Urgent Care, Direct Primary Care and near-site employer care, within the same clinics. Employers can offer true healthCARE to their employees, and their employees family members in convenient Charleston area locations. We offer a DISCOUNTED price for groups of 5 and more which is 37% off our regular rate for free Unlimited Medical Visits!

Walk-in care is also available for non-members, without an appointment including a Doctor/PA evaluation, EKG and/or X-rays as needed, testing for Flu, Strep, UA, A1C, lipids and more, up to 2 shots (non-vaccine) and any written prescriptions. 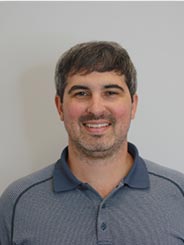 Blake Willis, MD
Medical Director
Dr. Blake Willis was born and raised in Albany, Ga. He obtained his bachelor’s degree from the University of Georgia and medical degree from the Medical College of Georgia. He completed residency in Emergency Medicine at the Medical University of South Carolina, where he was Chief Resident. He completed fellowship training in Emergency Ultrasound and Emergency Global Health. In addition to being the Medical Director at Renew Medical IV Spa & Urgent Care, Dr. Willis practices emergency medicine in South Carolina and Georgia. He is also the Ultrasound Director for Mercer Emergency Medicine Residency. 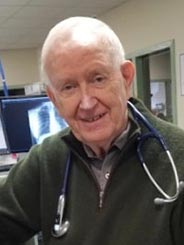 Richard Rhodes, MD
Dr. Richard Rhodes finished his pre-med training at Kent State University. He then received his D.O. in Medicine from Des Moines University, where he worked his way through medical school as a radio and television announcer.

He continued his post-graduate training at Warren General Hospital in Warren, Ohio and remained on their staff for 31 years.

Dr. Rhodes began his medical practice in a rural community in Ashtabula County, Ohio. While there, he was appointed the medical coroner and also interim sheriff. He was also the physician for Don King’s boxers, including Mike Tyson, Larry Holmes, and Tim Witherspoon, all of whom were Heavyweight Champions.

In 1974, Dr. Rhodes developed the Emergency Department at Warren General Hospital, a 220 bed teaching hospital in Ohio, and served as Director of Emergency Medicine there for 16 years. During this time, he founded Emergency Physicians Inc. and managed the Emergency Departments in 7 hospitals in Ohio, Kansas, and Indiana. He was a member of The American College of Emergency Physicians, the American Osteopathic Association, and was certified in family practice. He was also listed in Who’s Who in the Midwest.

Dr. Rhodes subsequently left Ohio and moved to Charleston, South Carolina with his wife Mary Jo and his family. He became Regional Medical Director for Doctors Care and was responsible for overseeing 11 medical centers for 10 years.

He was recently appointed a Top Physician by The International Association of HealthCare Professionals and included in the publication The Leading Physicians of the World while practicing family medicine at Health First in Charleston, S.C. 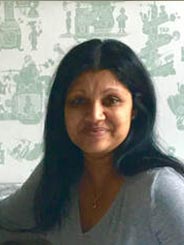 Anoma Gamage, MD
Dr. Anoma Gamage has more than 25 years experience as a physician. She graduated from medical school in the United Kingdom, after which she practiced internal and emergency medicine. She subsequently moved to Charleston, SC and completed her Family Practice residency at MUSC.

Dr. Gamage went on to practice rural family and emergency room medicine for a short 3 years and then moved onto Emergency Medicine, which was her passion, in a busy hospital in Columbia SC. However, she always wanted to return to Charleston and settled back here in 2010 with her physician husband and three children.

She chose to move into urgent care medicine as a way for her to continue practicing emergent medicine as well as spending time outside of work with her family. She believes that a healthy work/life balance allows her to be an efficient and compassionate physician.

In her free time, Dr. Gamage enjoys spending time cheering on the sidelines, at her children’s soccer and baseball games, with her husband Frank, cooking and traveling. She is fluent in French and her favorite food is chocolate. 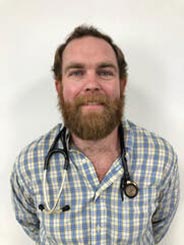 Dakota Hadley, PA-C
Dakota Hadley, PA-C
Dakota Hadley was raised in Summerville, SC. He graduated from College of Charleston with honors, while obtaining his bachelor’s degree in Psychology. He obtained his master’s degree in Physician Assistant Studies at George Washington University. He has worked in both Orthopaedics and Emergency Medicine before joining Holy City Med. He enjoys spending time with his beautiful wife and twin boys, gardening, and seeing live music. 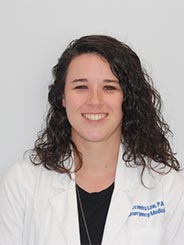 Alexandra Law, PA-C
Alexandra (Alex) Law grew up in Downingtown, PA. She started making her way south to flee the cold weather to High Point University in High Point, NC where she completed her undergraduate degree with honors in Biology with a minor in psychology. Soon after, she fell in love with Charleston while completing her Master’s in Physician Assistant Studies at the Medical University of South Carolina in 2016. She began her career as a physician assistant in emergency medicine in Greensboro, NC for 4 years. Looking to return to Charleston, Alex found Holy City Med to be a very appealing model, providing fast, affordable, and quality care while also providing an opportunity for continuity of care—something Alex missed while working in the emergency department. Holy City Med also fosters a very positive, encouraging work environment centered in faith. In her free time, Alex enjoys spending time with family and friends, traveling, going to the beach, being involved in her church, and trying all the restaurants that Charleston has to offer. 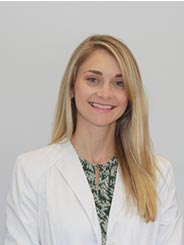 Kirsten Patterson MS, PA-C
Kirsten Patterson is a board-certified Physician Assistant specializing in Urgent Care and Family Medicine. She was raised in Savannah, Georgia where she attended nearby Georgia Southern University majoring in Biology and Sociology. She then went onto South University in Savannah, Georgia to earn her Masters of Science in Physician Assistant Studies.

Kirsten loves being able to provide compassionate patient care to the Charleston community. She is an advocate for wellness and encourages patients to take an active role in their health. She brings years of experience caring for patients of all ages.

In her spare time, Kirsten enjoys traveling and spending time outdoors with her husband, daughter, and 2 pups. 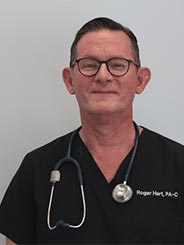 Roger Hart, PA-C
Roger is a native South Carolinian. He received a bachelor’s degree in English and a master’s degree in linguistics before becoming a physician assistant through MUSC in Charleston. Having worked in Emergency Medicine and Primary Care, he has over 25 years’ experience. He is fluent in Spanish and enjoys practicing Brazilian Jiu-jitsu and voice-over. He has been happily married to “la bella” Margarita since 1989 and they have two wonderful adult children, Jonathan and Emily. 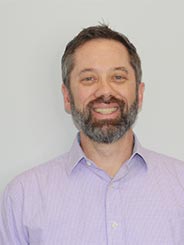 Scott Forrester, PA-C
P. Scott Forrester was born and raised in East Tennessee and has lived in the southeast most of his life. In the early 90’s he had the opportunity to serve in missions in Moscow, Russia over a 2-year period teaching in the local schools and orphanages. It was during this time where he met his to be wife, Tamra who was also serving with the same mission organization in Moscow, Russia at that time.

Scott spent the next several years working with a non-profit organization in northern Michigan whose focus was on training in fields of rescue, service, and emergency response. It was during this time that he went through Paramedic training and underwater recovery and received his certifications in both.

Scott and Tamra got married in the early 2000’s and settled in Augusta, GA where he attended the Medical College of Georgia. Scott received his degree as a Physician Assistant and began his career in the ER in Augusta. They moved to Charleston in 2011 and has continued to work in the ER and in urgent care since that time. They enjoy being outdoors, experiencing Charleston’s low country cuisine, and spending time with their yellow lab Savannah and cat Kevin.

Best healthcare experience of my life! Everything that people dislike about healthcare, these guys do not do. Time: I didn’t have to wait even one minute; many places keep you waiting for hours. Pricing: Their pricing was posted for all to read and it was reasonable; most places hide their pricing because they’re gouging you. Care: They were polite, listened to my concerns, and answered my questions; most places have condescending and unhelpful staff. It’s been a long time since I felt like a patient and not prey in healthcare. l won’t go anyplace else.

Little to no wait time, friendly staff, and very affordable! This is my new go-to for most of my family’s medical needs.

This place is so nice, new, and clean. The staff was amazing! I was in and out in no time! The experience was also very affordable, especially for the amazing level of care and compassion I received and how nice I was talked to and treated! I will absolutely be going back there before anywhere else in the future if I ever need medical attention.

Holy City Medicine provides a whole new level of excellence in healthcare. The staff, facilities and service exceeded all of my expectations.

Great experience!!! All the staff were extremely kind and helpful. The PA, Alex that cared for me was amazing. She was very knowledgeable and created a treatment plan to address my issue and pain.

Use this request form to send your Appointment Request by email to Holy City Med Urgent and Primary Care’s office. Please keep in mind that some doctors’ offices will reply more quickly than others.

Do not use this request form for emergency care. If you have a true medical emergency, DIAL 911.