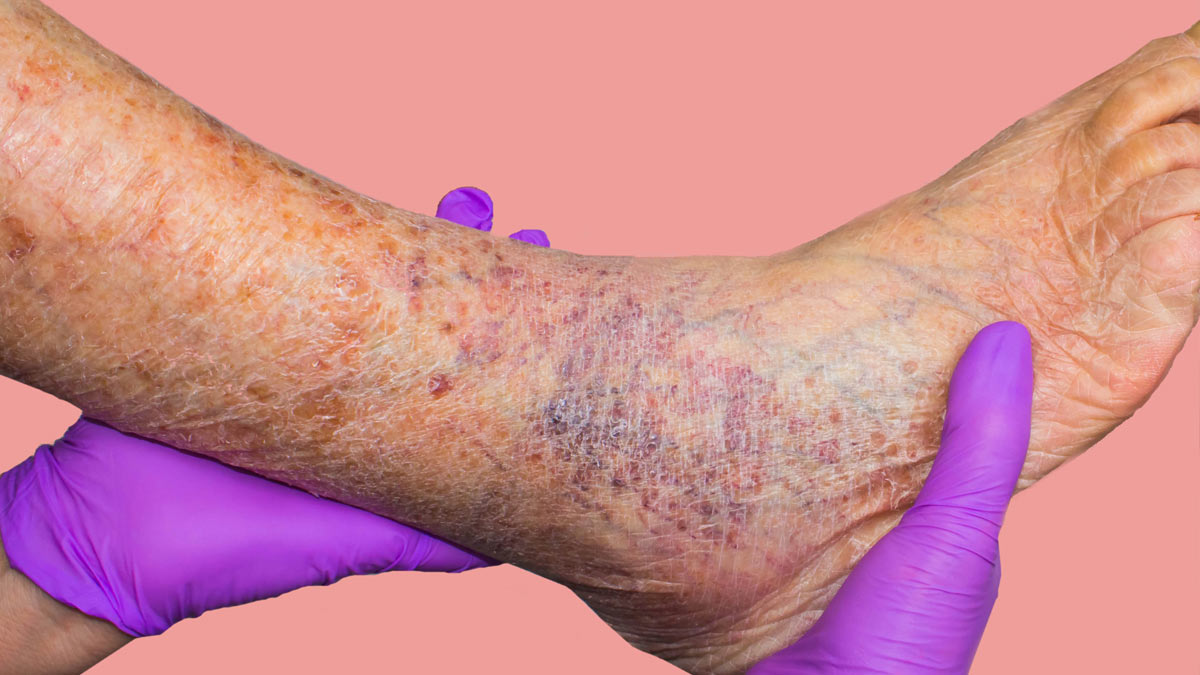 You’re a service worker and you’re on your feet all day. By shift’s end, your feet hurt, your legs are tired and achy, and your ankles are swollen. That’s not unexpected, right? It’s part of the job – but it could be something more.

You’re putting your shoes on and notice a sore on your ankle. Maybe you don’t remember how you got it, and, a few days later, it’s not healing. Well, that’s weird. You put some antiseptic cream on it and figure it will go away – but it doesn’t.

These are both common examples of an array of conditions falling under the umbrella of vascular disease. The two most common of these are peripheral artery disease or peripheral vascular disease and chronic venous insufficiency. That sounds serious, but these conditions are highly treatable and even reversible.

PAD and PVD – a broader term that relates to all blood vessels, not just arteries – are blockages commonly in the legs. In most cases, patients may have had this condition for some time, adapting their lifestyles to its limitations.

“The regularity and severity of symptoms should determine if you should seek care. If symptoms are more regular or severe, you probably should be seen,” said Dr. Adam Keefer of CVVC.

PAD is caused by blockages in the arteries, usually plaque, that restrict blood flow. Studies by the National Institutes of Health have shown that exercise rehabilitation encourages a “structural remodeling” – the formation of new blood vessels around the blockage – that improves overall circulation.

Vein disease is often minimized in the public view as a cosmetic issue, with images of bulging varicose veins as the most common problem. But Dr. Robert Musson at Allure Medical in Greenville said few patients come in for cosmetic reasons. Most commonly, their symptoms – aching, heaviness, tiredness, fatigue, throbbing, itching, swelling and restless legs or cramping at night, disrupt their life and their sleep, and they are seeking relief.

The veins in the legs carry blood to the heart, utilizing a series of valves that keep pushing the blood upward, against gravity. When valves wear out – the result of aging or genetics – gravity kicks in and pulls the blood back down into the leg, building up pressure and swelling. Some but not all patients have varicose veins that are visible on the surface. Many patients can only be diagnosed for this condition, generally known as chronic venous insufficiency, by their symptoms.

“An ultrasound will tell us if they have vein disease or not,” Dr. Musson said, adding “not everyone requires treatment.”

Exercise, walking, elevating your legs and compression stockings all can help.

If symptoms are more severe and noninterventional options aren’t helping, there are other good choices. Dr. Musson was quick to point out that treatment of vein conditions has significantly changed in the last 15 years. He described current treatments as “on the same level of having a filling at the dentist.”

“The procedures we do now are entirely outpatient. Patients are awake for the whole thing. We can either use heat through a catheter or injections of medication,” Dr. Musson explained. “In both cases, it causes the veins to collapse and scar closed. That forces the blood to reroute (to healthy veins) elsewhere. Then the body dissolves the old veins away to get rid of them.”

The worst cases are those who have had problems for years and let it go, Dr. Musson said. In those situations, the skin may start to break down, causing open sores or ulcers.

The key takeaways: Keep walking, keep exercising. If pain seems chronic, don’t be afraid to see a doctor. Because genetics are a big factor in vein conditions, if your parents had problems, you most likely will as well. Early treatment is important.

“What we’re striving for is an improved quality of life. If they get on it earlier, they’re going to tend to do a lot better,” Dr. Musson said.

Smoking is a huge predictor. Cigarette smoke causes the blood to thicken and form clots inside veins and arteries, according to the Centers for Disease Control and Prevention. Former smokers are 2.5 times more likely to develop an abdominal aneurysm. Current smokers are six times more at risk, and their outlook is even worse when combined with other risk factors.

Obesity is a major risk factor. Although it doesn’t cause vein disease, it makes it more painful. Additionally, obesity often limits the exercise that is so crucial in treatment.

Women, particularly in the years after childbirth, are more likely to have symptoms and more prone to seek treatment. Much of the problem is hormonal because estrogen exacerbates the symptoms; of vein disease. Men have the same relative risk but are often asymptomatic.

Race may play a role in peripheral artery disease as well, according to the CDC, and Dr. Musson estimates that 40% to 50% of the patients at Allure Medical are Black.

Patients with diabetes and high blood pressure are also at greater risk of vein disease.