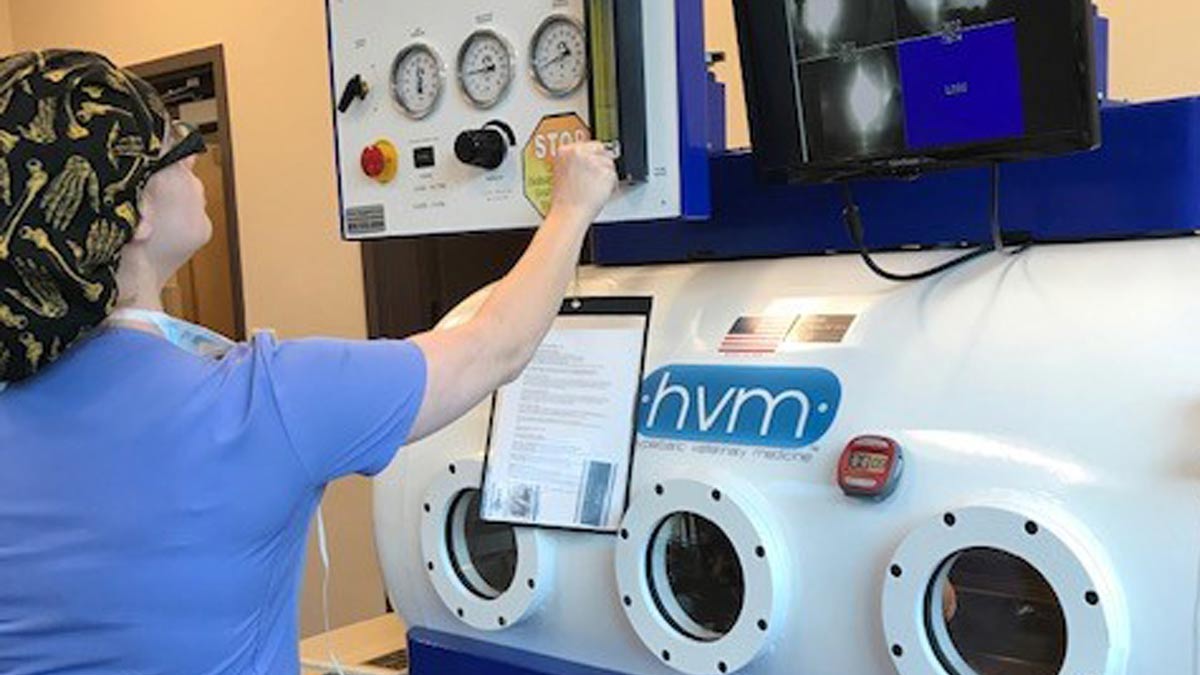 Even if you’ve never heard of a hyperbaric chamber – or if you think it’s just something else odd that pop star Michael Jackson kept at Neverland – it can be a key element in restoring your seriously ill pet’s health. There’s only one of these curiosities anywhere in the Lowcountry and it’s at Veterinary Specialty Care in Mount Pleasant.

According to Jess Nord, VMD, “The hyperbaric chamber is still rare in the veterinary world. It’s uncommon to have one in your practice. But we use ours frequently.”

To picture a hyperbaric chamber, think of an elongated metal tube, not unlike a tiny submarine, with a viewing window to see how the pet inside is faring.

Much like the recompression chambers used by some scuba divers to avoid the bends after a prolonged submersion, a hyperbaric chamber increases the air pressure from 1.5 to 3 atmospheres above sea level around the pet patient. And that greater pressure increases the ability of oxygen to enter the body through the lungs, then the blood vessels and, finally, the tissues of the body. Better oxygenated blood decreases inflammation and swelling and promotes better healing.

“A major use for the hyperbaric chamber at VSC is in treating dogs that present with wounds from being bitten by venomous snakes, a not uncommon occurrence here in the Lowcountry,” Dr. Nord said. “The same use also applies to pets who have suffered major wounds of any kind, such as having been struck by an automobile.”

According to Dr. Nord, hyperbaric oxygenation is also valuable in treating a range of chronic illnesses, from pancreatitis to inflammation of any of the pet’s major organs, such as the kidneys and the liver. The doctor noted that treatment in the chamber generally lasts one to two hours.

“These patients are not sedated,” she said. “We want them to be awake and aware. It’s safe when administered properly, and most animals tolerate the procedure well.”

Hyperbaric oxygenation therapy, termed HBOT for short, is also effective in helping to treat badly infected wounds, traumatic brain injuries, spinal cord issues “and any other condition – even a skin condition – where we are concerned about long-term inflammation.”

“HBOT is not a miracle treatment,” Dr. Nord said. “It is a very helpful adjunct to the other therapies we utilize. HBOT is almost always used in conjunction with antibiotic therapy, pain management, and/or care for gastrointestinal issues, depending on the pet’s illness.”

“HBOT is safe when administered under the constant supervision of our doctors and skilled, trained technicians,” she added, “and it has few, if any, long-term side effects. It’s pretty amazing how so many pets seem to feel much better after hyperbaric oxygen therapy. They are peppier, brighter and able to walk better. They also seem to do better than pets treated only with our standard therapies. You really have to see the difference to believe it.”

“We generally reserve HBOT for the patients that need it the most,” she concluded. “But it’s not terribly expensive, especially when weighed against the health of a beloved pet.”