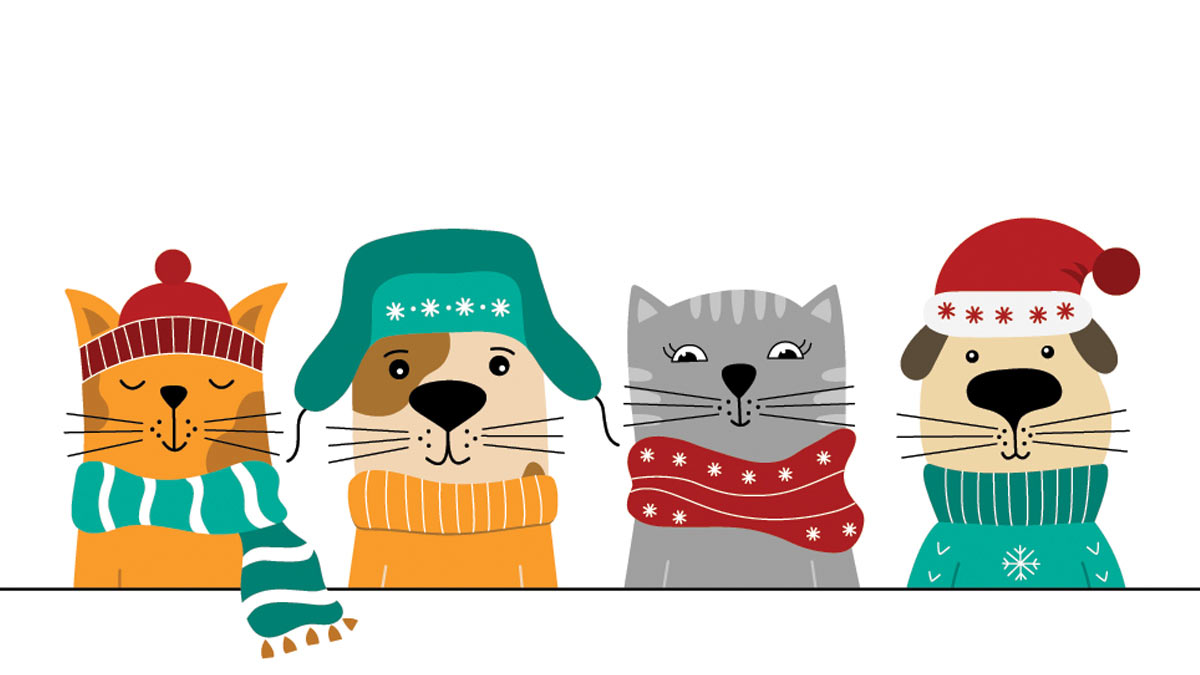 People who live in places such as Buffalo, New York, with an average snowfall of 8 feet or International Falls, Minnesota, where low temperatures average -4 F know all about “winterizing” their automobiles when the autumn leaves start to fall. They also know all about preparing their dogs and cats for the arrival of Old Man Winter.

Of course, hardly anybody thinks about winterizing in balmy South Carolina, where snow comes around about as often as a total eclipse and temperatures dipping below 30 F are almost unheard of.

But according to many veterinarians in our state, we’d do well to consider our pets’ special needs as we head into winter and the holiday season.

HealthLinks asked two prominent veterinarians – one in the Lowcountry, the other in the Upstate, to detail some of the things we should be doing to prepare our furry friends for the winter months and the annual Thanksgiving-New Year human festivities.

Dr. Jess Nord, VMD, of Veterinary Specialty Care in Mount Pleasant agreed that winters in the South don’t immediately present the challenges for pets she experienced in her native Philadelphia. Up there, just about everybody adds antifreeze to their cars’ radiators as soon as winter threatens. And antifreeze – even a tiny amount spilled accidentally, can be deadly if a dog or cat licks it up. And they will because it tastes sweet to them.

“A teaspoon of this radiator fluid can kill a cat and a bit more can prove fatal to a small dog,” Dr. Nord said.
Dr. Kim Sanders, DVM, of P.A.W.S. Animal Shelter in Anderson, noted that while her area doesn’t experience heavy snowfalls or sub-zero temperatures, it does get a lot of sleet, “and that can be even worse than snow because it’s just frozen rain, and pets can get very cold very quickly because they are so wet.”

As for outfitting pets with overcoats and booties, Dr. Sanders feels “in South Carolina, at least, that’s really a matter of choice, not necessity.”
The doctor herself has seven dogs – and some horses – and reports that while some of her dogs like to don winter wear, others are rather vigorously opposed.

Drs. Nord and Sanders agree that sufficient warmth is necessary for pets kept outdoors when the temperature dips. Doghouses should be properly insulated just like human houses with perhaps some straw bedding added and even a lightbulb installed to provide some extra warmth. And water bowls should not be allowed to freeze over.

A rule of thumb the veterinarians concurred about is that if it’s too cold – or too hot, for that matter – for you, it’s too cold for your pet.
Aside from the weather, Drs. Nord and Sanders identified the holidays as winter danger zones for pets.

Feeding them table scraps from the festive turkey or ham and fatty side dishes can cause pancreatitis. Common ingredients such as raisins, grapes or onions can be toxic. Chocolate – especially dark chocolate – can kill. Some bones from the turkey carcass can be absorbed by a pet, but others cannot and may prove fatal.

Even some holiday decorations are a real danger. A pet nibbling on a poinsettia can become very ill and both holly and mistletoe can cause serious gastrointestinal and cardiac issues.

Glittering tinsel on a Christmas tree is a huge problem if you have a cat. Felines are drawn to the shiny stuff and tend to swallow it, which can result in serious and life-threatening damage to the lower intestine.
According to the doctors, if you think your pet has consumed something dangerous, the best bet is to call ASPCA Poison Control immediately at their emergency number: 888-426-4235.

Over and above the physical hazards of the holidays, the veterinarians both cited stress as a problem for pets. Like humans, pets are comfortable with their routines. Suddenly, their home is filled with lots of people, many of them strangers. There’s a strange tree in the living room covered in lights. Loud music is playing nonstop. And there are small people – children – chasing them around and pulling at them.
It’s enough to send any pet scurrying to find a place to get away from it all. So think ahead and provide them with a safe space where goofy Uncle Bob can’t feed them liquor as a joke – which can be a crime of animal abuse – and the toddler in some guest’s family can’t poke them in the eye.

Here in South Carolina, just as in more frigid zones, domestic pets have to be given extra care in winter and over the holidays. If you have a question about what’s appropriate, don’t guess. Pick up the phone and ask your vet – before it’s too late.

HealthLinks is proud to welcome Veterinary Speciality Care as our official sponsor of our Healthy Pet; Happy Pet section. Veterinary Specialty Care provides around-the-clock veterinary services to our pets in need.
For more information, visit them at www.VeterinarySpecialtyCare.com.